Plants never stop amazing me. With their power to harness energy from sun and give us oxygen as a by-product; they provide us food, clothing, and beauty. Yet a group of plants that only gets noticed when it is the wrong spot deserves a bit more respect. These would be the weeds of our gardens.

The past rainy winter and spring produced weeds continuously. The weeds are well adapted at growing quickly to complete their lifecycle and set seeds to start the next generation before 1) the dry summer begins and 2) before being noticed and be pulled by a gardener. As I worked my way through the gardens over the past couple of months, I was impressed by how smart some of the weeds were for being able to hide themselves in amongst similar leafed plants. 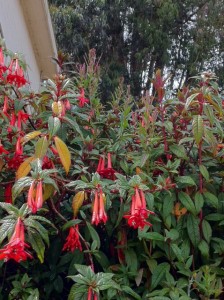 I found fireweed, Epilobium, growing amongst Fuchsia ‘Grand Harfare’ and Jupiter’s beard, Centranthus ruber. Not until the weed had outgrown its hiding place and was flowering that it called attention to itself. The fuchsia’s leaves have an almost identical vein pattern to the epilobium and the pinky hue of the fireweed accented the coral tones of the fuchsia. The fireweed was able to disguise itself with the jupiter’s beard by being a light green that matched well, again, the leaf shape was almost indistinguishable. 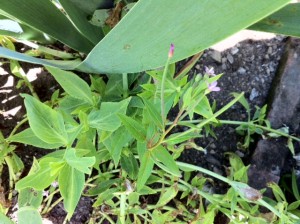 Solanum americanum, American nightshade, is a very common weed on the island. It is very easy to pull when young but once established, the stems usually break off when pulled. 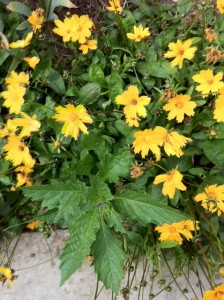 I found a young plant growing with tickseed, Coreopsis ‘Nana’. The deep green of the leaves of both plants is very much alike. Perhaps the ‘smart’ nightshade did not

realize that it was trying to camouflage itself with a dwarf cultivar and it quickly outgrew its companion.