Marking the Passage of Time

Summer is slowly showing itself on the island and the change of seasons can be seen in the blooming gardens.

A section of the main road, as visitors walk from the dock to the cell house is affectionately called the ‘fern wall’, even though in summer there is no evidence of ferns anywhere. The granite blocks that form this retaining wall was built in the early military days and was softened by moss and ferns that came to the island likely as spores in the imported soil. 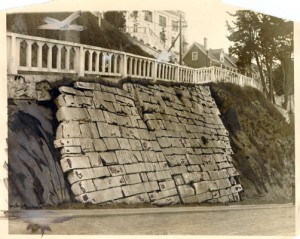 As the winter rains cease, the native fern, Polypodium californicum turns a golden  brown and then go dormant. The fern wall undergoes a dramatic change from lush green to vivid pinks as the Jupiter’s beard, Centranthus ruber, bursts into the season. At the base of the wall is a collection of Pelargonium that are survivors from the prison days – ‘Brilliant’, ‘Mrs. Langtry’ and P. quercifolium that add to the hue of pinks. 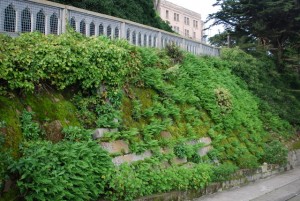 Fern wall in the spring. Photo by Shelagh Fritz 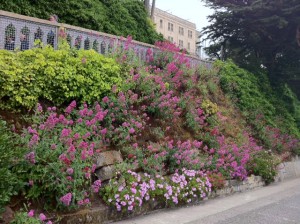 Fern wall in the summer. Photo by Shelagh Fritz

To be accurate with historic photos of this wall, last year, we planted plugs of Persian carpet, Drosanthemum floribundum in the cracks of the granite blocks that will eventually cascade down the wall. With living walls being the current trend in gardening, this wall on Alcatraz was way ahead of its time. 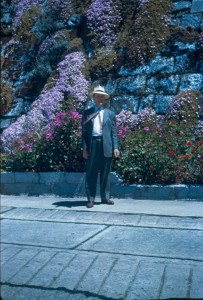 The wall in the 1940s. Photo by Joseph Simpson

When the fog rolls in, the intent of the original gardeners to create cheerfulness on a barren island must have been no easy undertaking. I also cannot help but wonder if the inmate gardeners marked the passage of time with the changing blossoms.

This entry was posted in History, Plants, Weather. Bookmark the permalink.