The Mapping of Alcatraz

Spanish discovery and exploration of the San Francisco Bay Area and its islands began in 1769. The English surveyed the Bay in 1826. Early maps of Alcatraz can be viewed on the National Park Service website.

Cartography has come a long way since the Spanish and English mapped Alcatraz in the mid 1700s. This week, Robert Warden, the Director of the Center for Heritage Conservation (CHC) and Professor of Architecture at Texas A&M University has been on the island with his associates Dr. Julie Rogers, Associate Director for the CHC and Lonnie Champagne along with Director Dr. Tanya Komas and her students from the Concrete Industry Management Program at Chico State University, to demonstrate the uses of laser scanning. 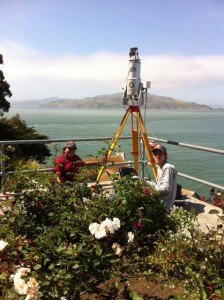 Laser scanning or Light Detection and Ranging (LIDAR) is a method of producing millions of points in 3D space that represent the size and shape of objects as large as landscapes and as small as nails.  The product is called a point cloud, which can look like a 3D photograph if there are enough points.  It produces points by bouncing a laser beam off of objects – like buildings – and calculating the angle and distance of the object from the scanner. It works very much like a typical survey total station in concept with the exception that scanners can calculate tens to hundreds of thousands of point locations per second rather than the single point from a total station.  Multiple scans are carefully pieced together to form a complete 3D point cloud of the object.  Scanners, like cameras have differing technical specifications that make them useful for different purposes.  The challenge of recording historic buildings and sites like Alcatraz is the necessity for accuracy at large and small scales. Typical accuracy for the Riegl 390 used for this session is 6mm.

As I was speaking with Robert, his students were scanning the Warden’s House and within 30 minutes, an image was produced that could show me the individual bricks in the fireplace, looking down into the building. 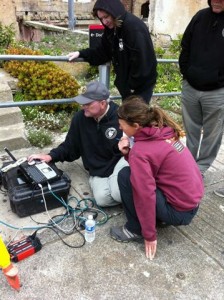 Laser Scanning has been in use since the 1970s but only in the last fifteen years has the development of laser digital technology allowed it to be adapted for preservation and engineering purposes.

On Alcatraz, this technology will be useful for documenting the historic site accurately. Mapping the gardens in the early days of the Historic Gardens of Alcatraz Project was difficult with the overgrowth entanglements that obscured the fine details in the landscape.

With laser scanning, details such as gradient changes, precise distances and documenting the current state of the historic features can be done. Laser scanning is quick and accurate. In additional to documenting the landscape, the information gathered from laser scanning can produce accurate interpretive models and be useful for maintenance of the aging structures.

It will be exciting to see where this new technology will lead us.

This entry was posted in History, Rehabilitation. Bookmark the permalink.