The Discovery film that greets island visitors introduces the idea of Alcatraz being a layered cake of history with each era built upon the previous. Looking closely, an observant person can see where the layers meet.

The military mainly used bricks in the early construction of the island fortifications. The bricks are like ingredients in the layered cake history, each adding to the flavor of history.

The bricks themselves are rich in history and have their own stories about where they were made and how they arrived on Alcatraz. Brick companies often stamped their name in the bricks and in the gardens, nine types of named bricks have been recorded. Many of these bricks were re-used in the construction of the 1940s era garden pathways mostly found in the Officers’ Row gardens. 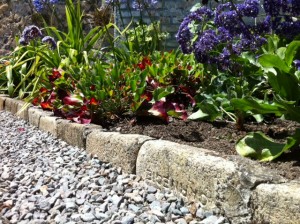 One of the early bricks is stamped ‘COWEN’. This firebrick was manufactured by the Joseph Cowen & Company at Blaydon Burn in northeast England between 1816 and 1900. It is a mystery how a brick from northeast England ended up in a garden pathway on Alcatraz, perhaps the brick came as ballast in a ship and was then destined for building a growing San Francisco.

standing for City Hall. Bricks for city hall were manufactured by several companies in Oakland and San Francisco in the 1870s. Usually, bricks are stamped with the manufacturer’s name, not the destination of the brick. City Hall was destroyed by the earthquake and fire in 1906 and the bricks were located to Alcatraz in an effort to clear up the rubble that littered the city.

‘CARNEGIE’ bricks date between 1902 and 1911 and were made at Carnegie, in San Joaquin County, California. Many companies had their beginnings related to the gold rush and the Carnegie Brick and Pottery Company is no different. Founded in 1902, railroad workers found a seam of coal and while mining for the coal, discovered clay. With a building boom in San Francisco, building materials were in high demand and by 1910, 110 000 bricks a day were being made and were distributed all over California. The factory supported a small town but sadly, the bank that held the mortgage failed and the plant soon closed. The site is now part of the Carnegie State Vehicular Recreation Area.

The Livermore Fire Brick Company also has bricks on Alcatraz and the beginnings of this company illustrate the entrepreneurial characteristic of California’s early business men. In 1908 a group of businessmen proposed to develop Livermore’s first non-agricultural industry. Their plan involved the donation of 5 acres of land with the condition that all workers would live in the town, thereby boosting the local economy. An additional ten acres was purchased by the businessmen for $2650. The town then decided to use the remaining money from their Earthquake Fund to purchase the community’s share in the plant. A clause was added to the purchase of the land that the plant was to revert to town property if the plant was to be used for anything other than manufacturing. The brick plant was in operation from 1910 to 1949. A source of clay was never found locally but the company was able to ship their bricks to Sacramento, Washington State, Mexico and Honolulu. The company began experimenting in 1914 using diatomaceous earth and replaced the use of cork in lining commercial refrigerators.

LINCOLN fire bricks were made between 1890 and 1943 by the Gladding McBean & Company in Lincoln, Placer County, California. Founder Charles Gladding came to Sacramento after serving in the Civil War. He had heard about clay being found and travelled to Lincoln to take samples. The clay was found to be of excellent quality and the supply was good. He enlisted the help of his friends from Chicago and in May of 1875, the company was started. The company started to make sewer pipes and soon located an office on Market Street in San Francisco. They decorated the building with terra cotta trim and soon became known for architectural terra cotta facades. The company expanded to produce fire bricks, roof tile, chimney pipes and garden pottery. Their roof tiles were used at Stanford University and they continue to supply tiles for any current work. The company is still going strong.

Other bricks on the island are SNOWBALL, from the Derwenthaugh Fire Bricks Works in England; M.T. & CO dated from the 1860s; DFC and WEMCO from the Denver Firebrick 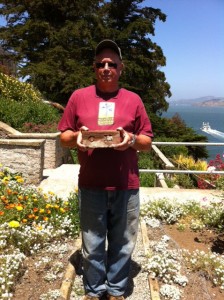 Company. More remains to be researched about these companies and their bricks. For brick collectors (yes, there is such a thing), a great resource is Dan Mosier’s website ‘California Bricks’. Randy, a long-time garden volunteer has taken a deep interest in the bricks and is constantly on the lookout for new bricks that that we have not seen yet.

This entry was posted in Artifact, History, Volunteers. Bookmark the permalink.