The plant life on Alcatraz is mostly made up from non-native plants. Plants were brought to the island by people who were found themselves on the island by duty or by punishment. Today, these surviving plants represent gardening trends from years past. Mr. Freddie Reichel, one of the first gardeners for the penitentiary prison made connections with key horticulturists who recommended plants that would do well on the island. These plants, then considered rare and novel, are more common in the Bay Area now, but they are part of the living history on Alcatraz.

Blooming right now, one of these novelties is the New Zealand Christmas tree, Metrosideros excelsa. Two specimens were planted in the inmate’s gardens likely during the late-1930s on the west side of the island and are flourishing. Wisely chosen, these magnificent trees thrive in coastal conditions – tolerating wind and salt spray, and preferring well drained soil with moderate water.

Visitors from New Zealand this week were surprised to recognize the tree and asked if it was the Pohutukawa tree, referring to the tree by the native Maori name. In New Zealand, the tree blooms around Christmas time during the southern hemisphere summer. Seeing a familiar tree bloom in July instead of December in a different country is like chancing upon an old friend while on vacation. 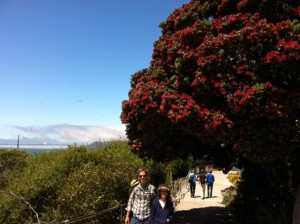 The tree is highly regarded in native Maori culture for its strength and beauty. The Latin name Metrosideros comes from the Greek. Metra means 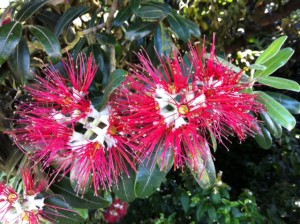 ‘heartwood’ and sideron refers to its ‘iron’ strength. Excelsus is Greek for ‘highest’. What looks like bright crimson red flowers are actually clusters of stamens, the male reproductive part of the flower.

Both trees on the island are in excellent heath and have been shaped by the wind over the years. We have been successful at propagating from cuttings one of the trees and so we are working to conserve the genetic material of these historic trees.