Some plants never go out of style and Dahlias have earned their space in gardens over the past two centuries. Dahlias were popular on Alcatraz during the 1940s and 1950s and are easily identified in photographs of Officers’ Row. Mrs. Casey, the medical officer’s wife, tended to her dahlias when she was not busy in her home. 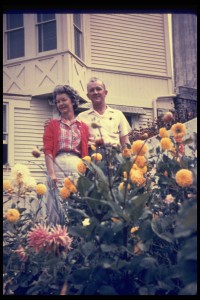 The Medical Officer and his wife, Mrs. Casey, with their dahlias outside of their Officers' Row home. Photo courtesy of J. Babyak, 1961ca

Last year, dahlias were re-planted in Officers’ Row and this year’s display is even better. Heirloom varieties were chosen to give the ‘look and the feel’ of the historic photos with lots of red, orange and yellow blooms. Seven varieties of old-fashioned tubers were chosen that would had been available to the gardeners of Alcatraz: 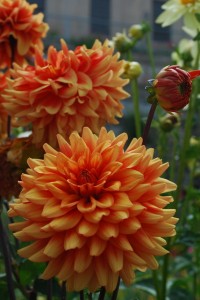 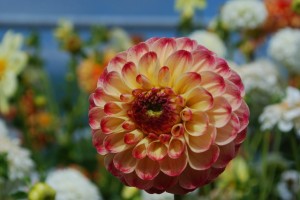 Dahlias are fairly easy to care for; they prefer soil rich in full sun, organic matter, and regular water. The Officers’ Row gardens are protected from the harsh Pacific winds on the east side of the island and enjoy a full eight hours of sun during the summer. The organic matter is supplied by our own compost with supplements of sheep manure in the spring. The water is provided by a rainwater catchment from the restroom roof by the Warden’s House. The rain barrel captures 500 gallons and supplies enough water for the summer months. Last year, we began utilizing this rain catchment and so could justify the use of the water for growing dahlias again.

The average winter temperature on Alcatraz is rarely below 40?F (4.4?C) and so the tubers are left in over the winter. Regular removal of dead flowers over the summer ensures a steady bloom to the end of September, Dahlia ‘Yellow Gem’ bloomed until October. 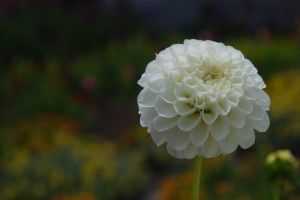 Your best opportunity to see the dahlias are on Wednesdays when Officers’ Row gardens are open for our ‘Ask the Gardener’.

One Response to In Bloom: Dahlias