Harvest season is here and the chill in the air at night says winter is on its way. The fig tree, Ficus carica, growing in the inmate’s garden on the west side of the island has produced a bumper crop this year, at least for the songbirds who will benefit most from the abundance of fruit. 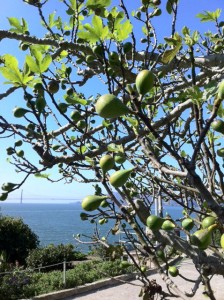 The fig tree, believed to be a black Mission Fig, was planted by inmate gardener Elliot Michener in the early 1940s. In an oral history interview with Elliot conducted in the late 1990s, he visited the island and walked around his gardens once again, showing the interviewer where he had spent nine years of his life working in the gardens. He saw the fig tree still growing in its original spot; and in a proud gardener’s voice with a hint of tour guide points out “and here are my old fig trees.” Elliot clearly remembered the fig tree growing on both sides of the fence with the guard tower in the background. In the interview, Elliot remarks “Yes, they have lasted a long time, just all these years.” 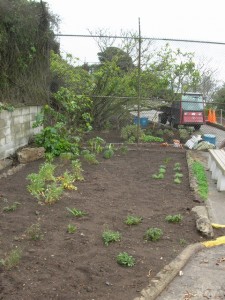 The fig tree cleared of overgrowth and beginning of new plantings in November 2008. Photo by Shelagh Fritz 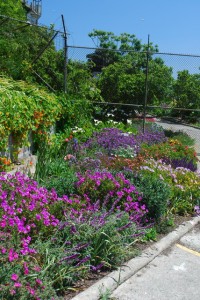 The fig tree and restored gardens flourishing in May 2011. Photo by Shelagh Fritz

Where Elliot obtained the fig tree is not known. Perhaps one of the guards that traded seeds for bouquets of inmate grown flowers was the source; or maybe the inmates were treated to figs for dessert and the inmates grew the tree from seeds? Nevertheless, the fig tree continues to prosper.

The fig has done so well, that in fact, during the 40 years of the gardens being neglected, the fig took on a life of its own and colonized the western lawn. The thicket of fig provides prime summer nesting habitat for approximately 80 pairs of nesting snowy egrets. 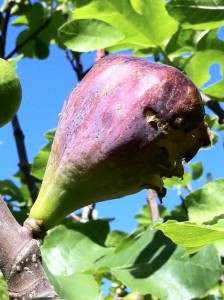 Elliot also comments in his interview “I’ve eaten figs off of this tree”. I too, have eaten a few ripened figs off of the same tree and have tasted what he has tasted. Working the same soil and tending the same plants as gardeners past, reinforces the importance of preserving historic horticulture and the stories of the people that tended these gardens.

For island visitors, many of them pause at the tree and wonder what kind it is. For me, not only is it a chance to show them their first fig tree but to also tell them about Elliot and what the gardens meant to him.

The sky around the San Francisco Bay Area has been very active this week – from storm clouds to Fleet Week’s Blue Angels practice runs. Dramatic clouds and sudden rainfalls, while unexpected for this time of year, were 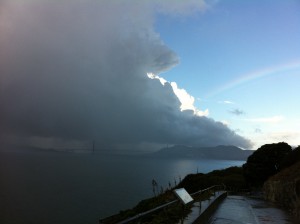 Storm clouds approaching over the Golden Gate Bridge with sunshine and a rainbow over Sausalito. Photo by Shelagh Fritz

refreshing and washed the island clean after the end of bird nesting season. The plants soaked up this first substantial rainfall and were sparked back to life after the dry summer.

Surprisingly, spring bulbs have been emerging in Officers’ Row. Daffodil leaf tips are poking through the soil and grape hyacinth (Muscari  armeniacum) have shot up over the last couple of days. Other bulbs such as Chasmanthe and Watsonia have been nudged into growing and their bright green leaves are a refreshing sight. Bear’s breech (Acanthus mollis) leaves are unfolding as well, each leaf being an exquisite living art unfurling from a knarled exposed root. 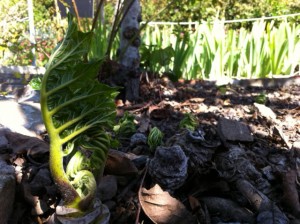 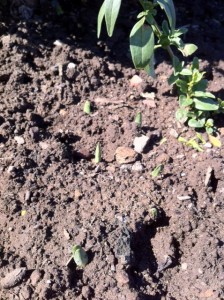 All of these plants have origins in other mediterranean climates similar to that of the Bay Area. They are adapted to dry summers; being baked in well drain soils and with the slightest moisture can be triggered into growing. Examining the survivor plant list for the island, it is no surprise that many on the list are from climates similar to ours.

Elsewhere on the island, the nasturtiums (Tropaeolum majus) continue to self-sow where 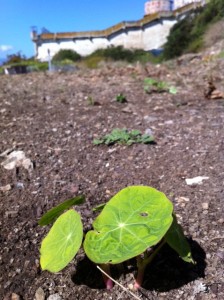 The next generation of nasturtiums beginning. Photo by Shelagh Fritz

they please. The nasturtiums were introduced to the island in 1924 by the California Wildflower and Spring Blossom Society as part of a beautification effort by the military. Whether you consider them invasive or successful, they are a part of the island’s rich horticultural history. Seeing them sprout now is reassuring that another generation will continue to decorate the slopes with brilliant orange and yellow flowers.

While some visitors plan their vacations to not be in rain, a visit to the island during a storm is exciting and the island feels more alive with the elements. Watching a storm approach through the Golden Gate and sweep toward you is a vacation memory that you cannot put in a photo album. 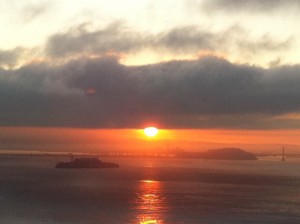 Sunrise this morning over Alcatraz. Photo by Shelagh Fritz

Posted in Gardens of Alcatraz, History, Plants, Weather | Comments Off on Spring Already?