We have been busy the past two weeks cutting back perennials and pruning the roses. This is the ideal time of year in Northern California to clean up perennials before new growth starts. The perennials in Officers’ Row have been tidied up and the bare bones of the garden are taking prominent stage at this time of the year. 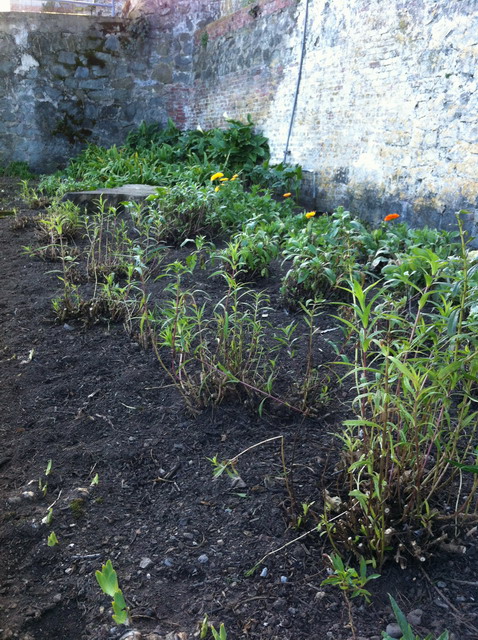 Penstemon that have been cut back to control the sprawling plants. Shelagh Fritz photo

Valerian, Centranthus ruber, Fuchsia, and yellow bush daisy, Euryops pectinatus, were all cut back hard this year to encourage denser new growth. The sprawling beard tongue tends to overtake its neighbors if not kept in check. The fuchsia and yellow bush daisy is fairly low maintenance and only needs to be cut back every other year. The growth of the yellow bush daisy tends to become very heavy and weighs on the branches, eventually cracking and breaking the stems. Pruning is not essential it helps to keep the plants more compact otherwise the plants will become ‘leggy’, having very few leaves at their base, if left on their own.

As well, boxwood and spirea bushes were given a light haircut, adding shape to their formal appearance.

Karolina Park, our Garden Conservancy gardener since February 2009, looks forward to pruning the roses back each year. Removing any damaged and older canes from the point of origin, she selects four or five newer canes that are angled outwards. This will direct new growth outwards and will encourage light to enter the center of the bush when growth resumes in the spring. Each cane is cut back to about one foot high, with strong, healthy buds pointing outwards at the top. Again, this will direct new growth outwards. 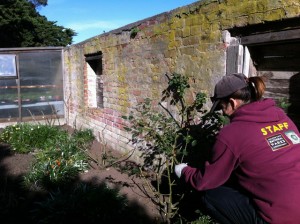 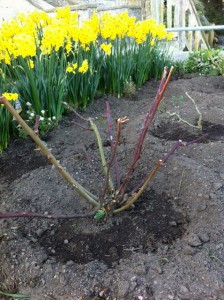 A pruned rose bush with a basin around its dripline. Photo by Shelagh Fritz

Fallen leaves and debris are brushed away from the crown of the plant to prevent insects and disease from overwintering. Basins are then formed around the drip line of each bush, to hold irrigation water.

By the end of the day there is a huge pile of trimmings for the compost; and the garden feels refreshed and ready for another growing year.