Abandoned and overgrown orchards are pretty common to see in the country side, left for the birds and wildlife to enjoy the harvest.  Of all the survivor plants on Alcatraz, perhaps some of the most unexpected are the apple trees. Not exactly an orchard, the two trees were planted years ago in the Prisoner Gardens on the west side of the island and they are still producing bright red gems with a yellow blush every autumn. 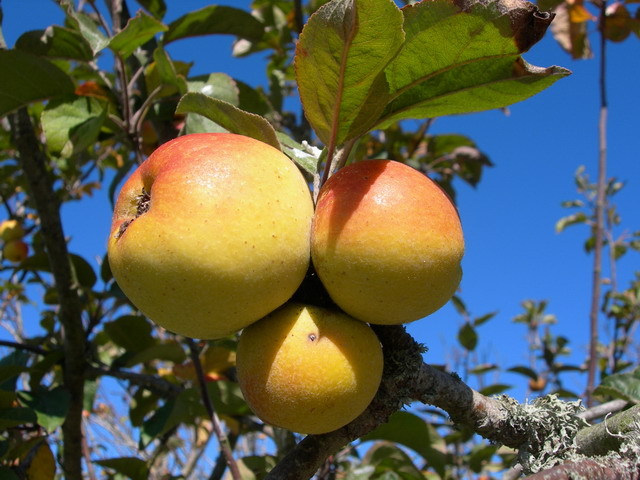 The trees are believed to have been started by an inmate gardener, who likely had apples for a snack and saved the seeds to grow. I’m sure any gardener today has thought about saving their apple seeds and starting their own trees; but few have the patience to wait years for the tree to mature, not to mention having a safe place where the seedling can be nurtured.

However, Alcatraz inmate gardeners had that time.

Twig cuttings of the trees were taken last December and were couriered to the National Plant Germplasm Repository for Apples, a department of the United States Department of Agriculture for Plant Genetic Research in Cornell, New York, with the hopes of identifying the apples with a cultivar name.

So far, researchers at the Repository have not been able to find a correct id for the trees. As the Alcatraz trees lack a graft union, where the scion (the top half of the tree) is joined to the trunk (the rootstock), we can reason that the trees were started from seed. Starting plants from seed increases the genetic variation and the difficulty of positively identifying the trees. If the trees had been started from vegetative cuttings, then the genetics would be the exact same as the parent plant and would most likely be from a known apple tree which would already be in the database.

While we do not have a name, we can still preserve the trees by keeping them growing. Keith Park, Horticulturist for the National Park Service at the John Muir House in Martinez, California was consulted. Park is the caretaker of Muir’s fruit trees and has also worked as the horticulturist at the well- known Filoli Gardens in Woodside, California and looked after their heirloom fruit trees.

Dormant twig cuttings of the Alcatraz apples were taken during the winter and Park grafted them onto a suitable rootstock. Park chose the rootstock MM.111 EMLA. Rootstocks are used to give the mature tree qualities the desired tree lacks, mostly to control the tree height and to give disease resistance. The scion still determines the kind of fruit produced. What does the MM.111 EMLA stand for? Much of the initial apple research began in England in the early 1900s. The ‘M’ refers to the East Malling Research Station in England; the ‘MM’ prefix refers to Malling-Merton when hybrid trees of the Malling series were crossed with ‘Northern Spy’ apples in Merton, England in the 1920s. The ‘EMLA’ suffix stands for ‘East Malling /Long Ashton’ when rootstocks were bred to be virus free in the 1960s. (Click here to read more about rootstocks).

Park had rootstock that was already a few years old, and so the diameter of the rootstock was slightly larger than the scion. Typically same size diameters would be used, but for us, it would work. Park described his handiwork: 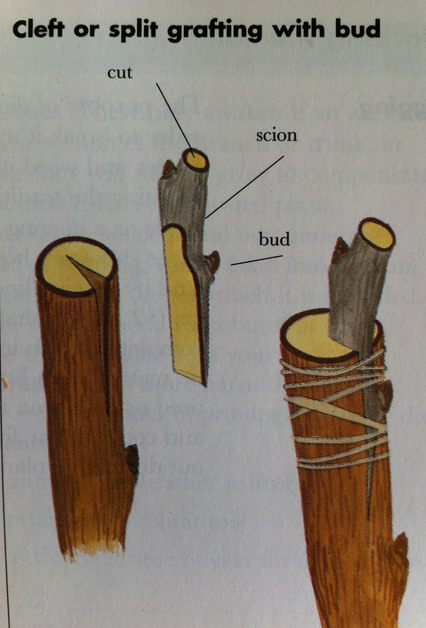 “When I have scion and rootstock material of different sizes I usually do a cleft graft, which involves splitting the rootstock down the middle with a knife about 3/4 of an inch, then shaving the bottom end of the scion to a long, even wedge (like a flat-blade screwdriver) and inserting it into the cleft in the rootstock. The most critical part is aligning the cambium of each piece. If the pieces are not exactly the same diameter (as is often the case) then I insert the scion to one side of the cleft and match up the cambium on one just one side.”

“The next step is to seal and secure the scion to its rootstock so it doesn’t dry out or fall out. I discovered a product called Parafilm, which is a wax impregnated cellophane tape that works great.”

“After the graft has taken the only real maintenance is to periodically rub off any adventitious growth from the rootstock. I’ve heard you should also prune off any flower buds if they appear on newly grafted trees, since it just consumes plant energy at a time when you don’t want fruit anyway.”

The grafted apple trees were grown outside in Woodside and we now have a few of the new apple trees back on the island. One of the trees, planted in the Electric Shop, barely lasted a week, as the wind snapped the tree in half. Luckily, we had a replacement and we can reuse the rootstock. Gardening on the Rock is a challenge but one with many rewards.

One Response to Apple trees on Alcatraz