It’s a fun time to be a volunteer in the gardens with working on the big projects for this winter. Many of the volunteers got hooked on gardening on the Rock because of the initial uncovering and ‘discovering’ of the forgotten gardens. For people that loves getting dirty and feeling like you are making a difference – this is the time to get involved!

The lawn, which is being prepared to be planted in the Fall of 2013 with native grasses, has become neglected and the ‘green’ of the lawn is all from non-native grasses and oxalis. But even this green vegetation died during the dry summer, leaving a barren looking backdrop to the manicured gardens.

To prepare the area, the first layer of mulch layering has been laid down, and to my dismay, birds have pecked their way through the compost and the cardboard to reach the soil, allowing light to the oxalis that we are trying to suffocate.  Those darn birds! I’m hoping to place another layer of cardboard and mulch in the coming week. 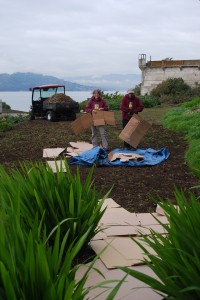 Beginning to lay down cardboard to smother the oxalis and weed seeds. A layer of mulch is then placed on top of the cardboard. Photo by Shelagh Fritz 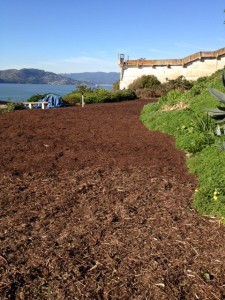 In the meantime, the volunteer crew is working away at clearing the forty plus years of overgrowth on the north end of the historic lawn. The overgrowth is being tackled from all sides, and today we finally made it to the base of the large Albizia tree that is in the middle. Another few hours were spent digging up ivy roots and before we knew it, it was 2pm already! As we worked, one of the volunteers wondered out loud if the author of Jack in the Bean Stock was a gardener that had pulled ivy. Some of the ivy shoots were easily 20 feet long! 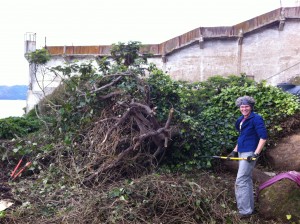 Clearing ivy is pretty addictive – the work is slow but methodical.

Posted in Gardens of Alcatraz, Rehabilitation | Comments Off on Clearing 40+ Years of Overgrowth 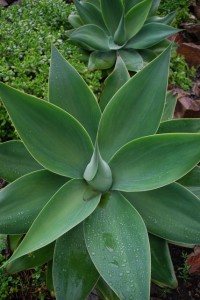 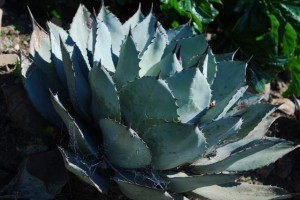 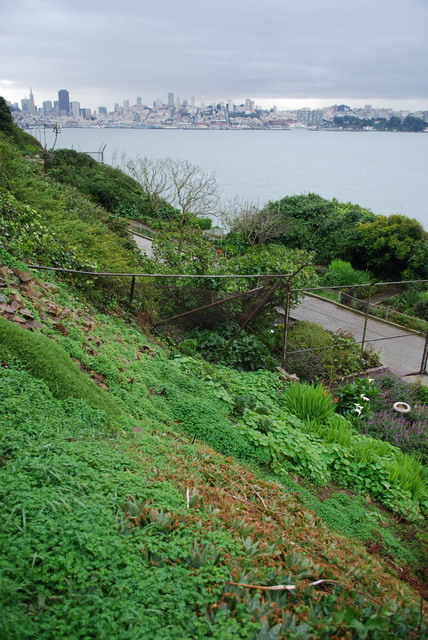 Even though Alcatraz is a rock, greywackle sandstone to be exact, erosion is taking its toll. 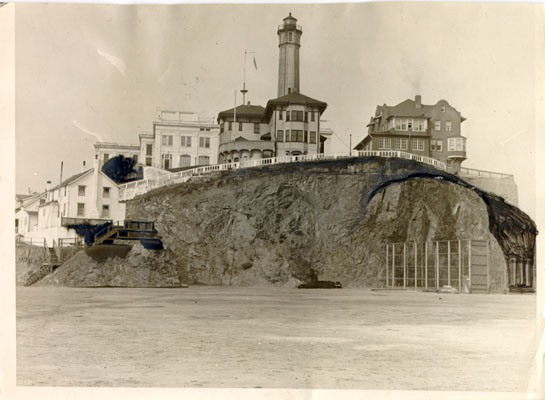 The Warden’s house in 1924. Photo courtesy of the San Francisco Library

Originally, the island had two summits that were blasted down by the military when the island was used as a fortress and later a military prison. Steep cliffs were created and the roadways that we walk today were carved into the hillsides. The Commander of the Army, and later, the Warden of the Federal Prison, picked the best vantage point to build his home on Alcatraz, of course, he picked the top of the island overlooking the Parade Ground. 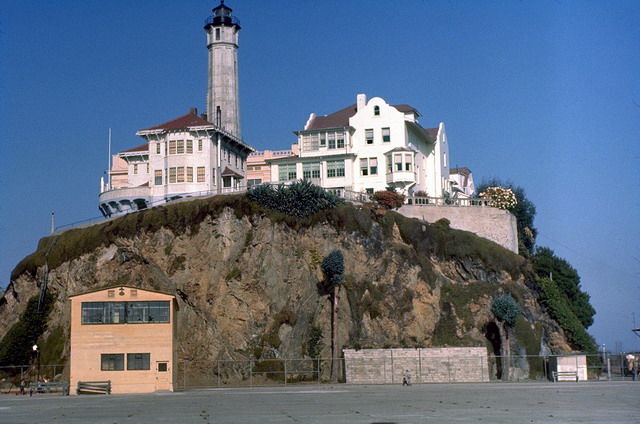 The Warden’s house and garden in the 1940s. Photo courtesy of Chuck Stucker

The cliff that the Warden’s House is perched upon has been slowly crumbling over the past few decades. This month, work was started to stabilize the cliff with placing shotcrete, to preserve the cliff and the historic home. Shotcrete is a mortar that is more dense, homogenous, stronger and waterproof compared to concrete. Shotcrete is sprayed onto the cliff, usually over a mesh, through a hose at high speed, so it can even be applied to vertical surfaces – making it a great choice to stabilize cliffs. 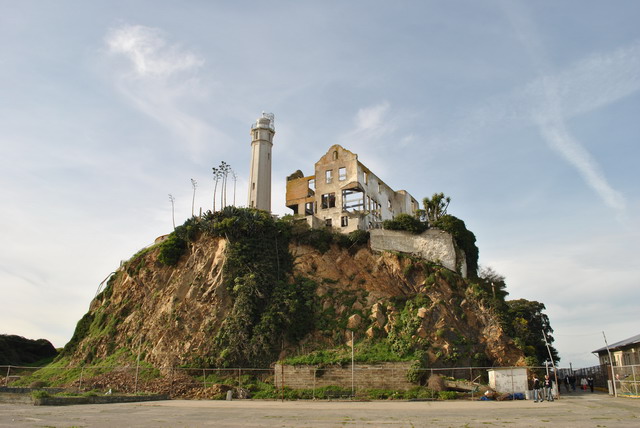 The cliff below the Warden’s house in 2008. Photo by Owen Shui

Workers first dangled over the cliff to remove vegetation and loose rock. A huge pile of Agave americana soon accumulated. These plants are truly amazing to cling to rock.

This week, the crew color coded the locations for placement of dowels that would be used to secure the mesh and bond the shotcrete (white) to the cliff face, weep holes to provide drainage (blue) and the locations of deeper rock bolts (orange). 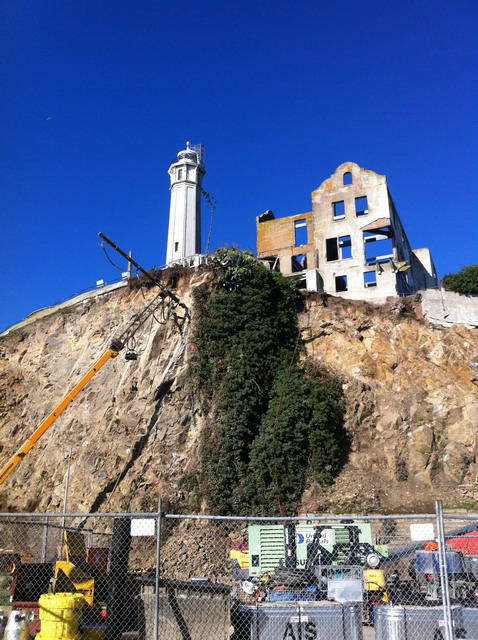 The cliff being stabilized. Photo by Shelagh Fritz

The work to stabilize the cliff will continue to the end of January. Visitors can watch the work progress and it is pretty interesting to see preservation of this historic landmark in progress.

Posted in History | Comments Off on But it’s a Rock…

A New Shortcut to Explore

I’ll let you in on a little secret – now is the best time to visit Alcatraz. The Thanksgiving crowds have gone home and the holiday season hasn’t started yet. The ferries are not packed, which means you can buy a ticket the day of. And even better, the island is lush and green, the daffodils are blooming and the hummingbirds are zipping around. 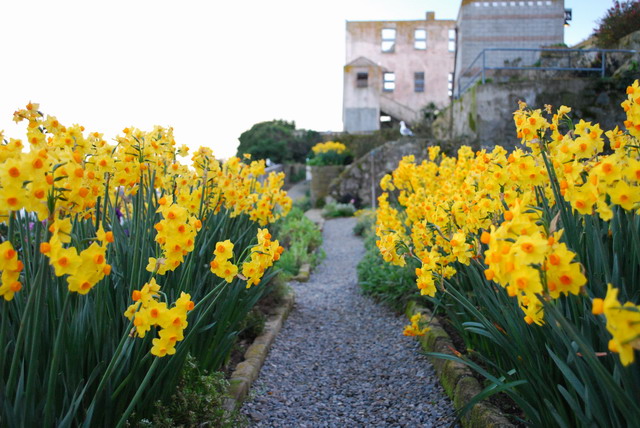 The island feels almost tranquil, especially the gardens. Normally quiet, even during the summer, the Prisoner Gardens on the west side of the island typically only sees visitors when the weather is particularly beautiful. In the winter, it is possible to work for hours in the gardens without saying hello to anyone. So, I had a bit of a surprise while working yesterday on the west side – the gardens actually felt busy. I wondered what was going on and then I realized – people were on the wrong side of the gate – in the CLOSED area!

Following the stream of people, I entered the Laundry Building and spoke to the National Park Service Intern, Nora. It seems like the Park decided to open the building doors and let visitors experience this normally ‘off limits’ shortcut. 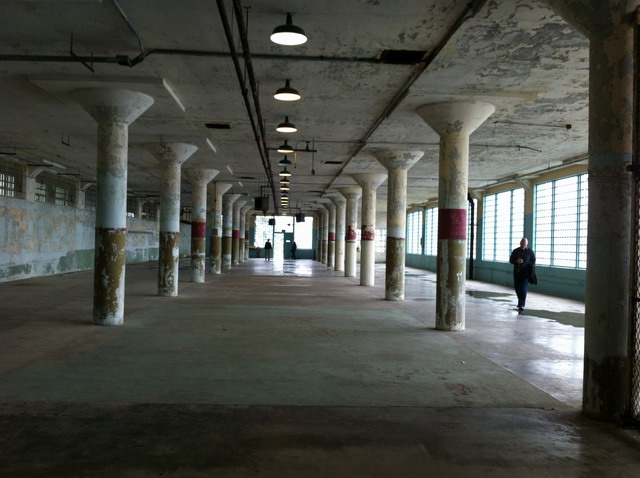 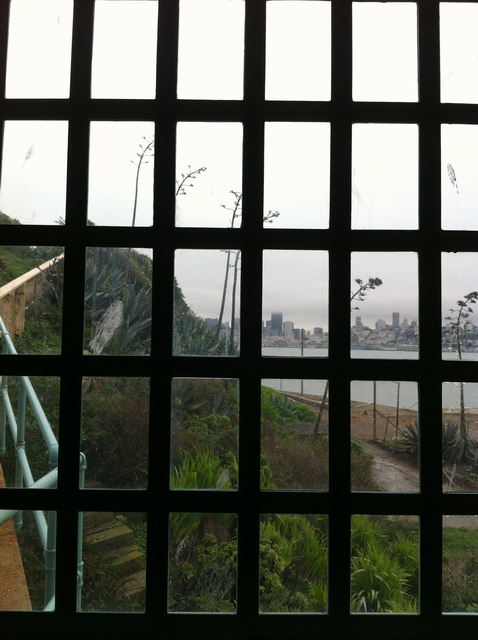 Through the eyes of the inmates – from inside the Laundry Building inmate gazed at the gardens and city beyond. Photo by Shelagh Fritz

This additional visitor access is pretty special – not only do visitors get to see more of the island, but now they can walk around the island through the Laundry Building instead of backtracking. The visitors are also walking in the steps of the inmates – walking through the gardens and seeing the city in the distance while on their way to work in the Laundry Building.

The cliché of being so close yet so far, probably never had a better example.

Even though you will not need to book ahead to visit during the winter months, don’t leave it until the last minute. This area will close for February 1 as Brandt’s Cormorants return to nest in a nearby area.

Posted in Gardens of Alcatraz, History, Inmate Gardeners | Comments Off on A New Shortcut to Explore

This week the Garden Conservancy celebrated ten years of our West Coast Council programs. We also gathered to honor Antonia Adezio, our President, who is stepping down in December. 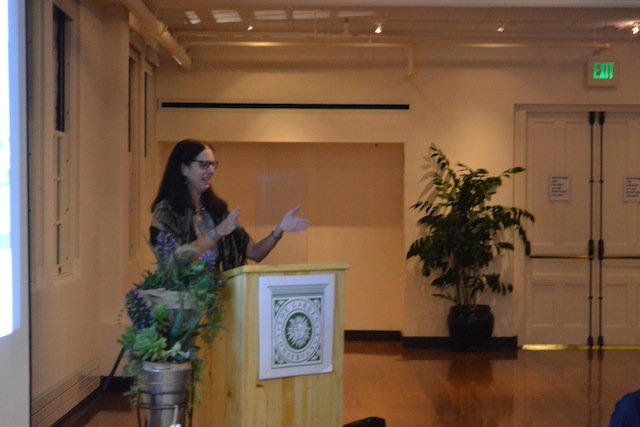 We reflected on our goal of having a bigger impact on West Coast gardeners. Looking around the room Wednesday evening at the close-knit community of gardeners, the Garden Conservancy has certainly excelled at this. In a way, it reminded me of what Freddie Riechel, the first secretary to the Warden challenged himself with when he took on caring for the gardens on Alcatraz back in 1933. Riechel reached out to expert horticulturists to keep the tradition of gardening on the Rock going. The Garden Conservancy has done the same, seeking advice from the West Coast Council and professionals to create educational programs to connect experts to local gardeners and to further develop preservation project gardens. 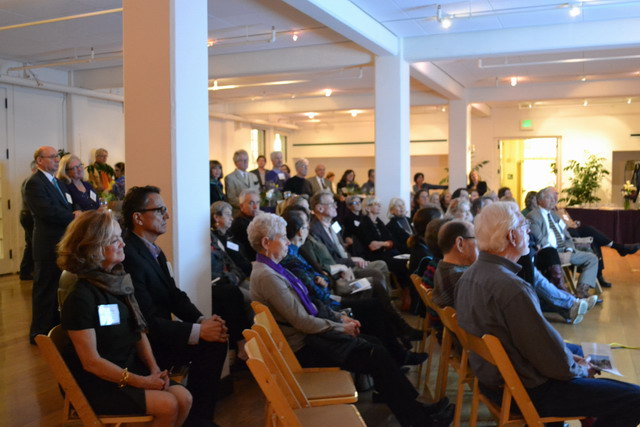 A packed room of Garden Conservancy supporters celebrates ten years of being in San Francisco. Photo by Emily Riley

Antonia joined the newly founded Garden Conservancy in 1989 at the request of Frank Cabot. With the organization firmly established on the East Coast, the board of directors determined that in 202, the organization was ready to have a regional office based in San Francisco. Shortly after, the Garden Conservancy was enticed by the National Park Service and the Golden Gate National Parks Conservancy to form a partnership to restore the Gardens of Alcatraz. The neglected historic gardens quickly became a passion for Antonia. As part of the evening’s ceremonies, I had the honor to present a brief history of our work on the island and to highlight our accomplishments with bringing the gardens back to life. 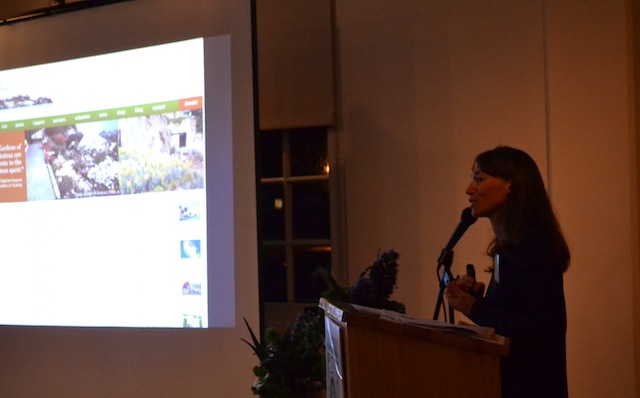 Presenting our work for the Gardens of Alcatraz. Photo by Emily Riley

Antonia’s leadership throughout her time with the Conservancy has shaped the success , especially with Alcatraz, and her vision will be continued as we carry on. I like to think that every garden holds onto some characteristic of their caretakers, even as the caretakers move on. I see this especially in the old gardens on Alcatraz – the surviving apple trees that still bear fruit, the inmate built terraces, and perhaps the greatest mark left – the decision by the Garden Conservancy get involved to restore the gardens for the future enjoyment for all.