When the Garden Conservancy started work to bring the Gardens of Alcatraz back to life after forty years of neglect, one of the fascinating aspects of the project was the plant life still surviving on the island. In 2005, an island wide survey was done and we found just over 200 different species of plants!

As most gardeners are also ‘list makers’, and like keeping track of new plantings and when the plants bloom, we started to keep track of the flowering times.

Beginning in 2009, we made simple lists by the season of what was in bloom. Our spreadsheets have gotten a bit more elaborate since then. We still list each species of plant, but also record which garden it is blooming in, if the blooming is just starting, in full bloom, or is fading.

Comparing the same months and the same gardens over the years tells us some interesting facts.

The gardens are pretty much all over the island, creating microclimates of sun versus shade, leeward versus windward, and watered plants versus ‘on your own’ plants. The survivor plants are great for looking at how these microclimates affect the blooming times under these conditions. 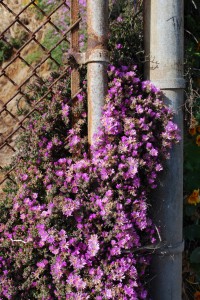 blooming on the south facing slopes last month but is still going strong on the East facing slopes. Planting the same plant with different sun exposures not only lengthens the blooming time, but it also allows more visitors to the island see this wonderful historic plant in bloom.

Another garden survivor that has had some subtle changes to its blooming time is Centranthus ruber, Jupiter’s Beard. In 2010, it started to bloom in the spring as it normally does and then finished in late September. Comparing the bloom times of 2012, the centranthus bloomed every month of the year! 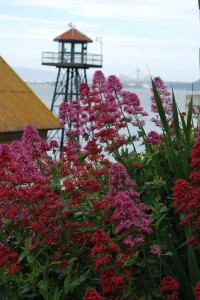 We will also have to now start tracking the weather conditions and the amount of rain and fog to really get a better picture of why the plants are blooming at such different times.

Posted in Gardens of Alcatraz, Plants | Comments Off on Blooming Times

On our shopping trip to Annie’s Annuals this past December we picked up a number of plants that would give the gardens plenty of blooms during the dry months of summer and into the fall. Scanning Annie’s website before we ventured out, we made our shopping list for plants that had the look of the 1940s and 1950s but that would also tolerate dry conditions and not be fussy about the soil.

We happened upon Tanacetum niveum ‘White Bouquet Tansy’. I think gardeners are, by nature, hopeful people – who else trusts that burying tiny seeds in the ground will bring forth in a few months times, overflowing beds of color? That is exactly what happened with our little 4” pot of Tanacetum. An unassuming clump of green leaves is now a two foot mound of daisy flowers. 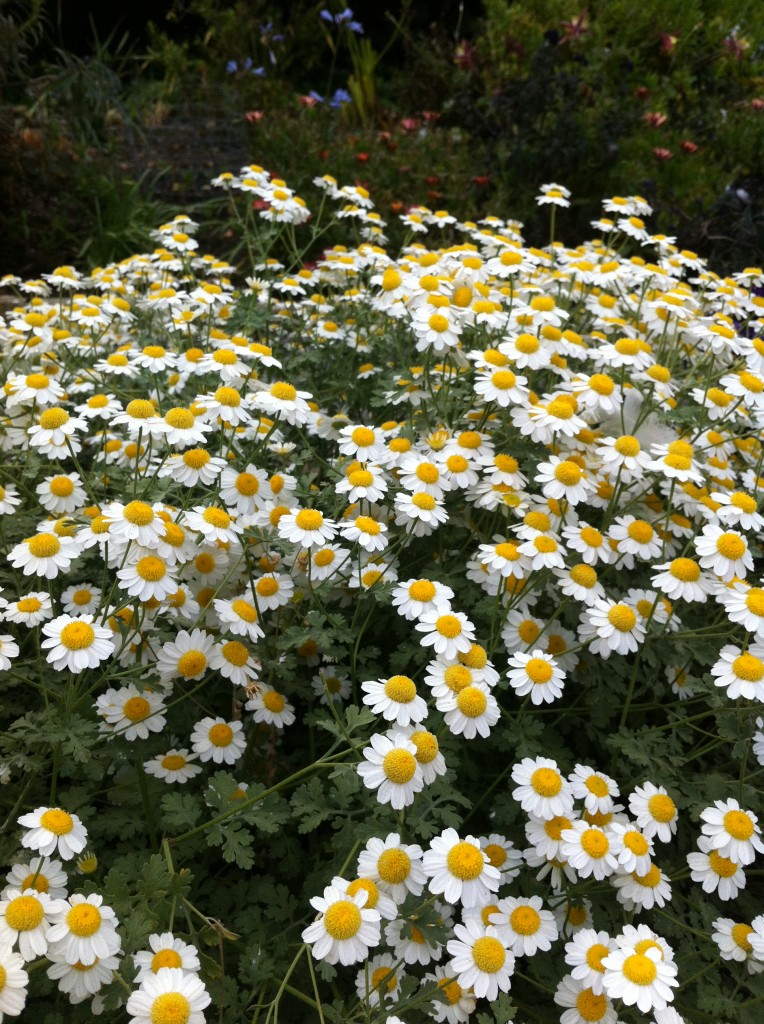 The daisy flowers echo the historic photo we have of the Prisoner Gardens along the roadway. We had tried Shasta daisy and white coneflower, but neither of these plants did very well. The Tanacetum is proving to be a winner! 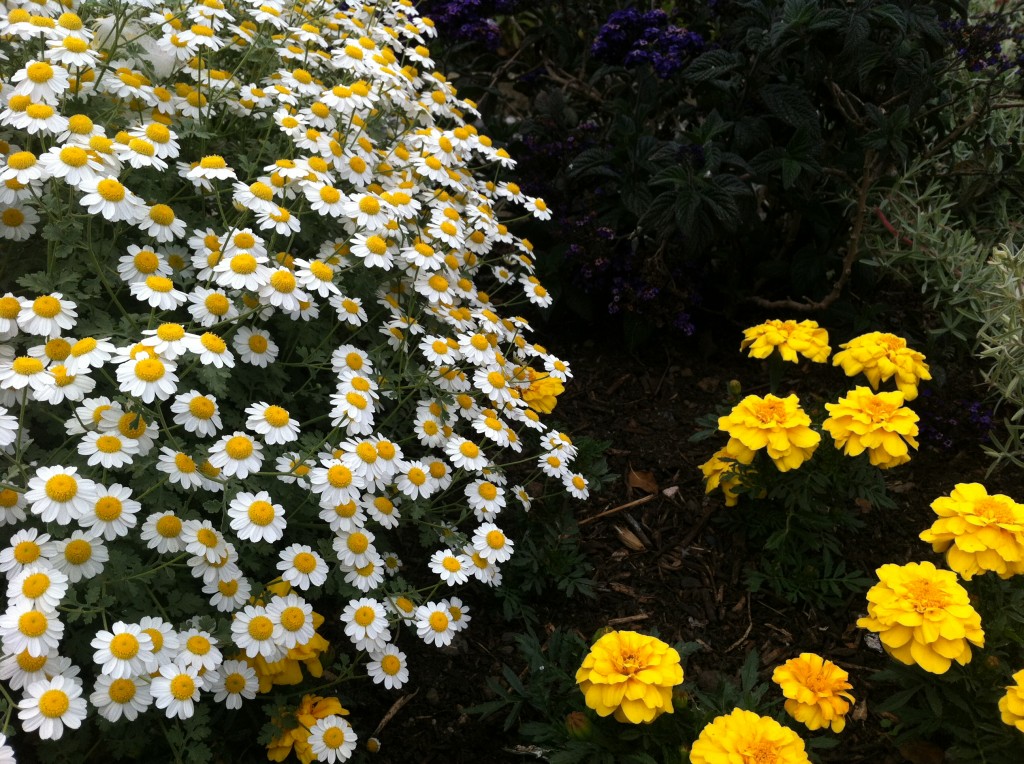 The yellow centers complement the yellow marigolds and coreopsis growing next to them. 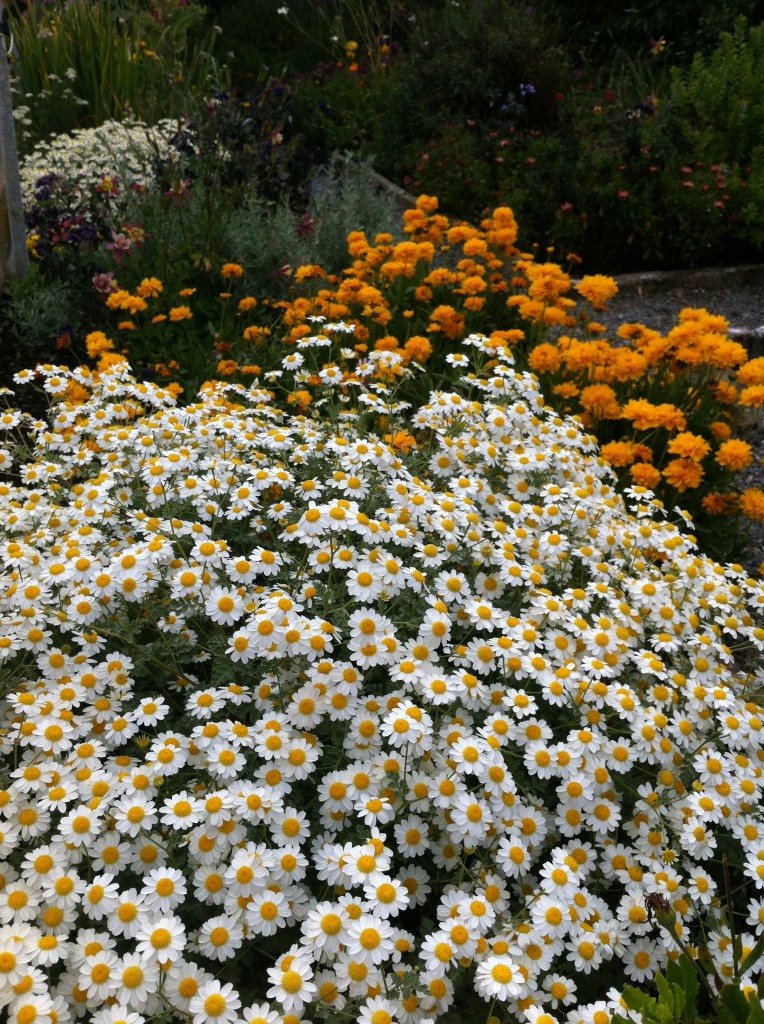 Annie describes this hardy perennial from Central South-Eastern Europe as indestructible, deer resistant, requires average to low water, self-sowing and needs full sun. We can also add ‘seagull proof’ and tolerates coastal conditions. After blooming is finished, it is recommended to cut the plant back to 3” for a second bloom. The Tanacetum is at home from USDA zones 4 to 10 – a very wide range!

I’m curious to see just how tough this plant is to not only see how long it will bloom for, but how the Bay’s  wind and fog treat it during the summer months.

Posted in Plants, Uncategorized | Comments Off on A New Garden Star