Compost guru Dick Miner has been cultivating our island compost for five years. In his retirement, he found a way to apply his career skills working in a lab for AIDS research with his hobby of gardening. In doing so, Dick has developed a deep passion turning our island green ‘waste’ back into soil. 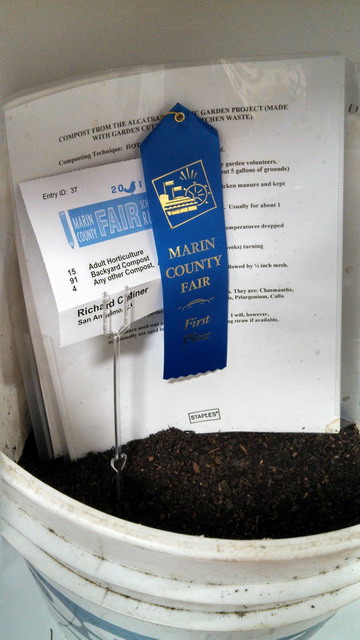 Awarded the Blue Ribbon for the best Compost!

Dick began to work on this winning batch of compost back in February. Actually, he began to think about this year’s competition the day after he won first place last year. Dick wanted to add food scraps into this year’s batch to increase the organic matter content. We had been experimenting with collecting vegetable and fruit scraps from the island’s staff lunches, but, after collecting the scraps for several months, we found that we were not obtaining desirable contents in the bins. So, Dick enlisted fellow garden volunteers to bring their scraps from home.

The batch was cultivated with care – being turned once a week to aerate and watering weekly to maintain the moisture content to a moist, but not wet feel. Our soil thermometer registered temperatures from the center of the 4’x4’ pile between 120F and 150F. These temperatures were maintained for two months. 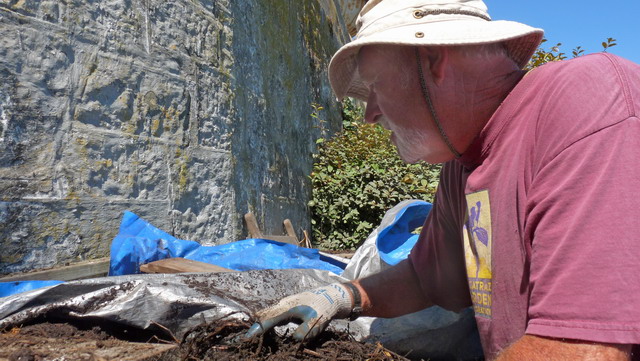 A natural teacher, Dick shared his love for his work with a microbiology class from San Francisco University High School this past May. The class is a survey class in microbiology that had been learning about bacteria, fungi, and viruses. The visit was an opportunity for the students to learn about microbiology as applied to decomposition. After a short lecture about the many organisms and processes involved in compost production, the class worked together to turn the compost piles. Turning the pile of compost, they could see first-hand the workings of a healthy compost pile that was teaming with microbes and earthworms—and even feel the heat from the decomposing vegetation. I’m sure the kids were appreciative that they were learning from a compost master.

This entry was posted in Gardens of Alcatraz, Plants, Sustainability. Bookmark the permalink.