Two similar plants that often get confused are mallow (Lavatera) and hollyhock (Alcea). A quick glance at these two and it is easy to see how they can be mistaken for each other.

Both plants belong to the same family of Malvaceae, and so they do share many common characteristics. The flower is the most obvious similarity. Resembling a hibiscus flower, the lavatera is very showy in shades of 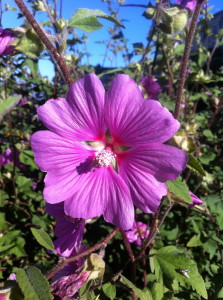 pink, red and white. The flower of the hollyhock is also very pretty and in similar shades. Both plants can be annuals, biennials or perennials, although the Lavatera is more often seen as a shrub in gardens while the hollyhock is typically a biennial with a stalk of flowers during its second year.

The hollyhock, with its 60 species, is native to Asia and Europe while the Lavatera, with 25 species, is more of a world traveler.  Its range is in the Mediterranean region, central and eastern Asia, Australia and from California to Mexico. Looking at the adaptability of the Lavatera, its no surprise that it can tolerate a wide range of soil to grow in. It actually prefers sandy, rocky or even clay soil in coastal regions (perfect for Alcatraz!). The hollyhock is a bit more fussy preferring rich, well drained garden soil.

On Alcatraz, we have introduced the mallow, 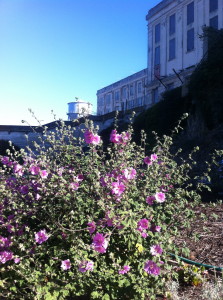 Lavatera assurgentiflora. Native to the Channel Islands, it has naturalized to the coastal areas of Southern California. We have had it in our Prisoner Gardens on the west side of the island for over a year now and it is doing extremely well. The shrubs have grown to 4 feet tall and wide, and have been consistently blooming for most of the summer and is still going strong. 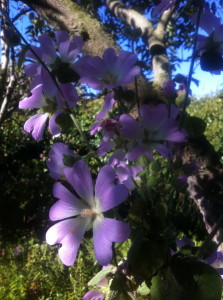 Flower of a hollyhock. Photo by Shelagh Fritz

Most of our hollyhocks have set seed already and we will have to replant them again next spring.

Both hollyhocks and mallows are good for hummingbird and butterflies.

We often tell visitors the common name of the Lavatera is mallow, which then leads to them asking if this is where marshmallows come from? The answer is ‘no’, marshmallows were originally derived from the plant Althaea officinalis, native to Egypt, but it is a member of the Malvaceae family.

Both Lavatera and hollyhock fit nicely with the cottage garden style of the Prisoner gardens with our mid1940s time period and we are already looking at seed catalogues for next year to add more to our gardens.

This entry was posted in Gardens of Alcatraz, Plants. Bookmark the permalink.