You are Forever Responsible for what you Tame 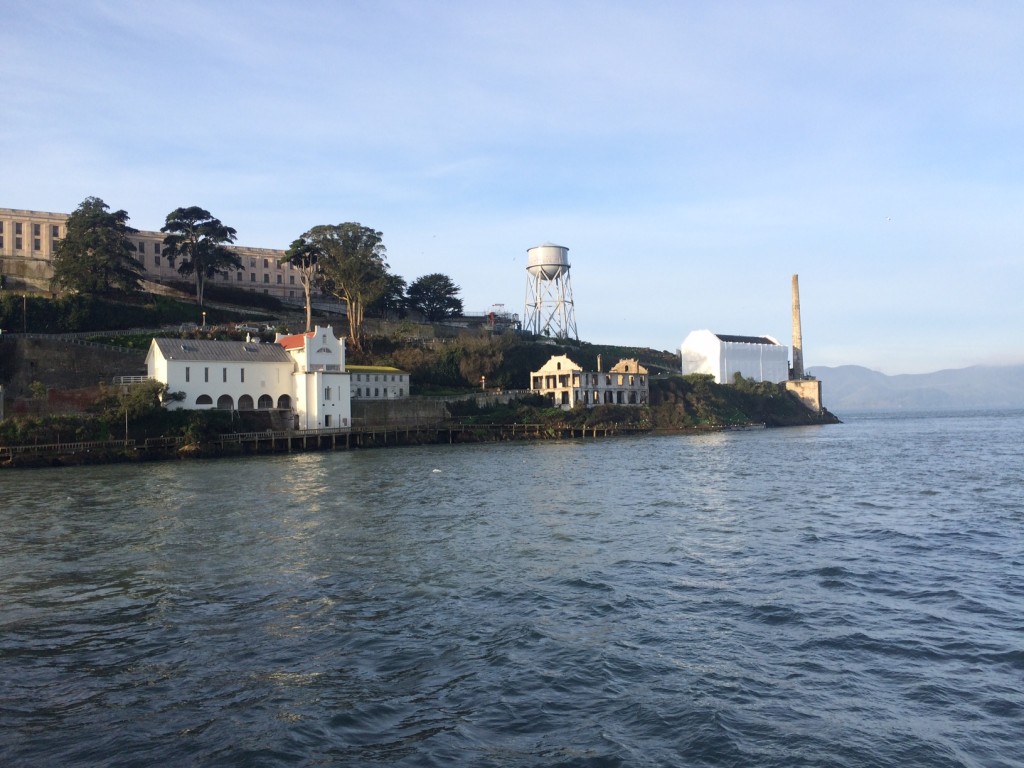 The outline of the island is considered historic. Photograph by Shelagh Fritz

Alcatraz, as a Historic National Landmark, has a pretty constant look, even the silhouette view of the island from the city is considered historical. However, over the past two weeks, the look of the island has changed dramatically. Unlike earthquakes that suddenly jolt the landscape into a different look, tree maintenance can (and should be) planned for.

Like all changes to the landscape, approval from the National Park Service was essential, especially when two one-hundred year old trees are being questioned. As a starting point, the Cultural Landscape Report that was adopted in 2010, had made the recommendation for tree work on the island’s historic and non-historic tree. The difference between historic and non-historic is any tree growing on the island between 1854 and 1963 is considered historic – any tree outside of that time frame is non-historic.

Tree maintenance, and especially tree removals, are quite expensive. With limited funds, we realized we could not do all of the recommended work at once, but would need to spread it over a few years. To help us decide what work should be done right away, tree consultants were brought in. The consultants evaluated each of the historic trees on health and safety. Non-historic trees were not examined as they will be removed anyway and were not posing any safety hazards.

To obtain the National Park Service’s final permission, a detailed description of all the work to be performed needed to be entered into the Planning, Environment and Public Comment (PEPC). A well written summary answers the 5 W’s (who, what, where, when, why) and the 1 H (how). Maps and diagrams may be attached and often help to explain to the people who review the projects who are not familiar with project sites. For the tree work, an administration approval was granted, however, sometimes a presentation must be made to a committee.

Loud disruptive work must be completed before the annual bird nesting season begins on February 1, so a push was on to get the work done.

Sounding like an opening scene for a scary novel, the arborists boarded a ferry on a dark and stormy morning out of San Francisco with their chainsaws in hand.

Starting work on probably the rainiest day was just bad luck. Nevertheless, lines got strung up in the trees, equipment moved to where it needed to be and the next morning work started promptly at 6am with the ferry ride. 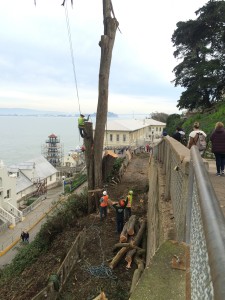 The arborists made steady work pruning the large Eucalyptus and moved onto various cypress along the roadway. The arborists were more like trapeze artists up in the trees. The crews skillfully tying limbs to be lowered to the ground instead of just letting them drop. Visitors actually cheered them on when large limbs were cut.

The amount of light and the feeling of airiness was apparent to us immediately. Often you don’t notice how overgrown a plant has become.

While it is sad that trees were cut down, it is important to remember that trees have lifespans as well. One of the trees will be replanted with another cypress and in another 100 years, we will likely cut it down again and replant. Even looking at historic photos from the military, there are many trees in the photos that are no longer there. Plus, for an island that originally had no trees, we should keep Antoine De Saint-Exupery quote from The Little Prince in mind ‘You become responsible, forever, for what you have tamed. 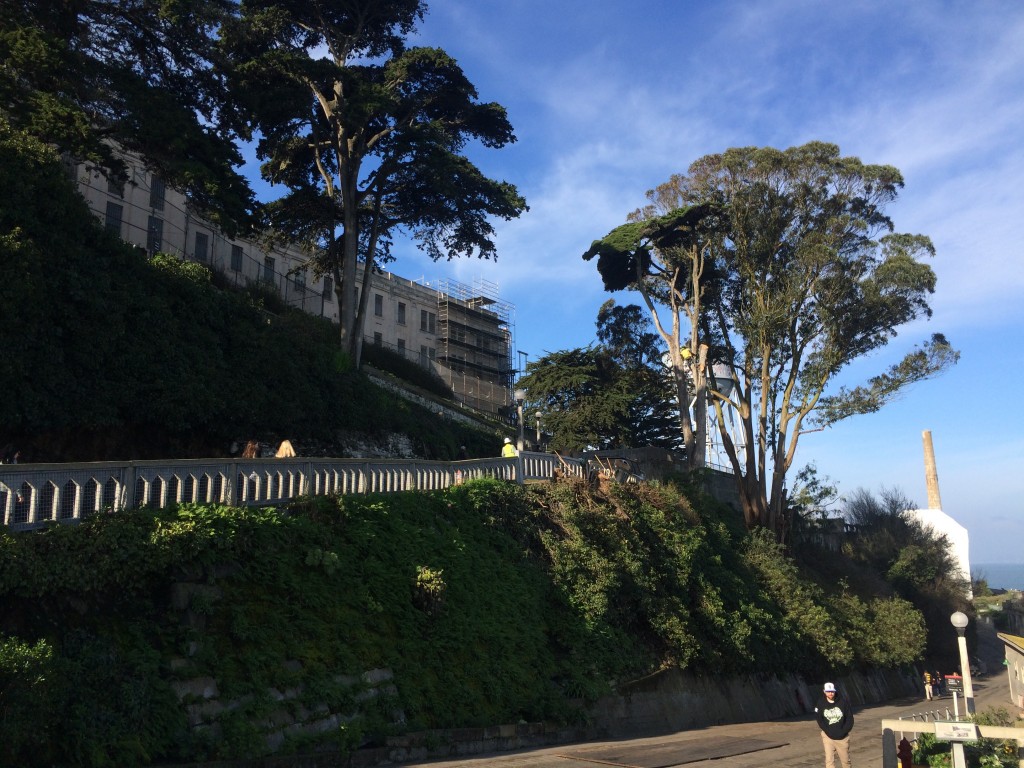 The in-progress image – the eucalyptus has been finished and work begins on the cypress. Photo by Shelagh Fritz 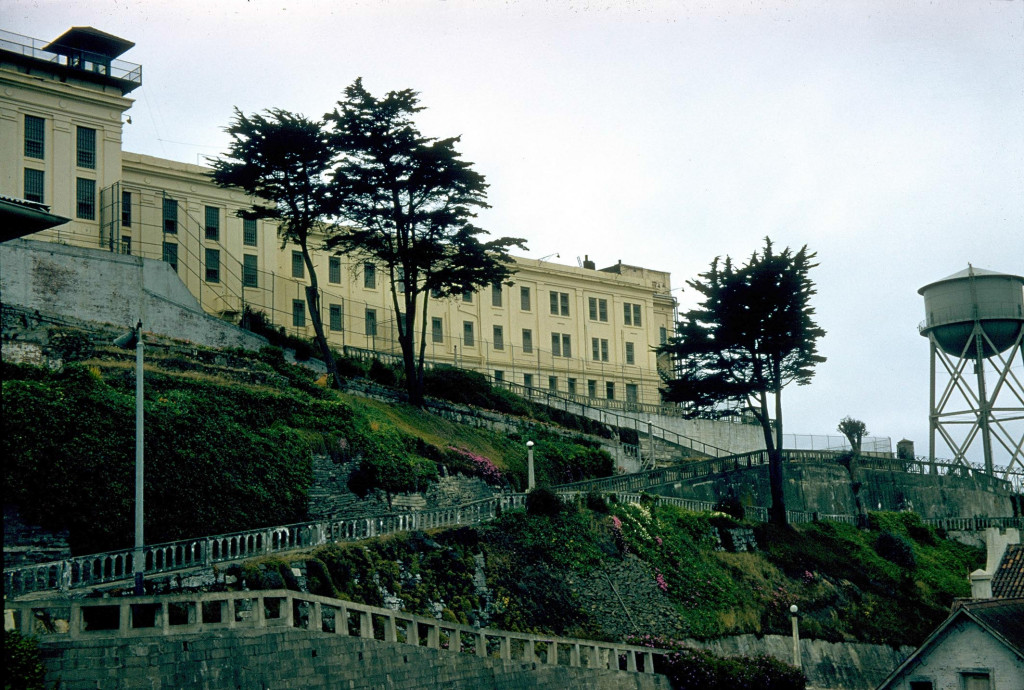 Historic photo of the cypress and eucalptus along the roadway. Photo courtesy of GGNRA

Posted in Gardens of Alcatraz, Plants, Preservation, Rehabilitation | Comments Off on You are Forever Responsible for what you Tame