Volunteers make 2010 a great year on the Rock

With over 4.5 acres of tended landscape and just one and a half Garden Conservancy staff gardeners to care for them, the Gardens of Alcatraz depend on dedicated volunteers to keep the gardens looking their best for the 1.3 million visitors a year. This past year, volunteers were involved in building a greenhouse, composting, repairing masonry, propagating, weeding, watering, planting, and guiding visitors through the gardens.

These hours are from the 117 individual volunteers that came out to the island on the regular Wednesday and Friday morning work sessions. Many of these volunteers have been gardening on the Rock since the Alcatraz Historic Garden Project began back in 2003. The gardens are also fortunate to have a steady stream of new volunteers interested in learning more about gardening, new to the city, or are just looking for something different to donate their time to. 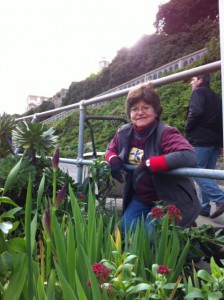 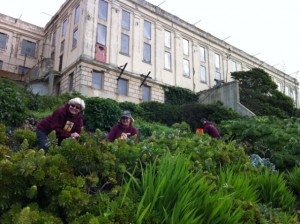 Contributing to the year’s total, 49 work groups from 42 different companies and organizations also came out to get involved in their community. Thanks to their efforts, overgrowth clearing takes a half day rather than a week of one person tackling the challenge.

Thank you to everyone who made 2010 a success!

The much anticipated winter rains that bring a lush green to the island mark another “season” in the gardens – the weeding season. The most prolific weed on the island is Oxalis pes-caprae, commonly known as sourgrass or Bermuda buttercup. It is native to South Africa and highly invasive in California, especially along the coast.

How oxalis came to be on Alcatraz is not known. However, it is thought that the bright yellow winter flowers of oxalis were ideal to plant with the summer blooming pink Persian carpet, Drosanthemum floribundum.

While this planning of sequential garden bloom is clever, past ornamental plant introductions often turn out to be problematic choices. 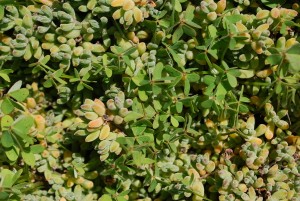 Drosanthemum and Oxalis growing together. Photo by Shelagh Fritz

To maintain the Persian carpet and to keep it from being choked out, volunteer gardeners will be spending countless hours on the south facing cell house slope from now until April. 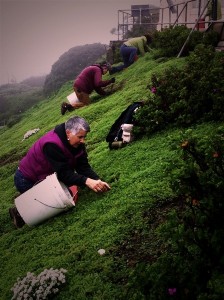 Weeding oxalis is no easy feat but not without rewards. Oxalis grows from a corm from a depth of one inch to over nine. Digging out the corm is the key to removing the weed once and for all, and the satisfaction of pulling out the entire corm is very rewarding. I often find myself holding up the offending corm and showing it off proudly to the volunteers, as usually it’s only other weeders who can fully appreciate the accomplishment. In addition to the sheer pleasure of weeding for hours, enjoying views of San Francisco and the Golden Gate Bridge, chatting with visitors who are also admiring the view, and occasionally eavesdropping on conversations cannot be beat. 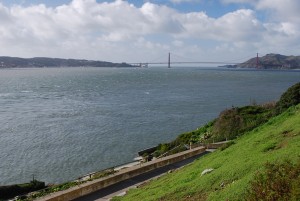 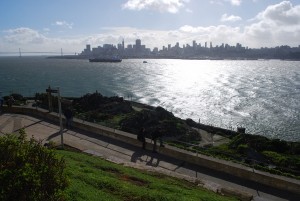 View of the Bay Bridge and the city skyline. Photo by Shelagh Fritz

Over 200 species of plants managed to survive on the island without any care after the federal prison closed in 1963. Among these hardy plants are several bulbs that are adapted for the dry summers and wet winters of a Mediterranean climate.

Freddie Reichel, the first secretary to Warden Johnson from 1934 to 1941, was one of the first federal penitentiary employees to voluntarily care for the gardens. One of his favorite plants was the daffodil. Through his effort, inmate gardeners soon took over caring for the landscape and even began hybridizing daffodils. Reichel visited the island years later and an inmate “showed Reichel where he had hidden his treasured hybridized narcissus, for it seemed that other residents thought they were too pretty to stay in the gardens.” (Gardens of Alcatraz book by John Hart, Michael Boland, Russell A. Beatty, Roy Eisenhardt, 1996)

While picking the flowers is not permitted in the National Park, visitors can enjoy the sight and smell of these garden treasures. Paperwhites are already in bloom. For the next two weeks, the fragrance of Narcissus ‘Galilee’ will greet visitors as they make their way up to the cell house. Flower buds of Narcissus ‘Grand Soleil d’Or’ are ready to burst open. 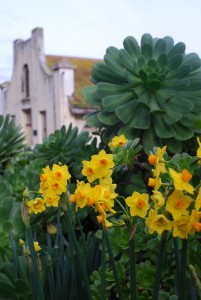 This heirloom bulb produces up to fifteen small flowers on each flower stem and a walk through Officers’ Row garden is not to be missed when these tiny flowers are in full bloom.

To complement the existing bulbs, additional daffodils were planted in the fall of 2006. With each passing year, they produce a better display. Officers’ Row is planted with ten different cultivars of daffodils that bloom from now until mid-March. 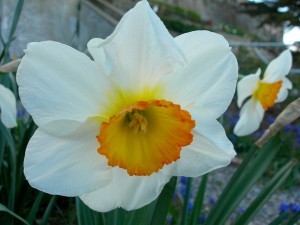 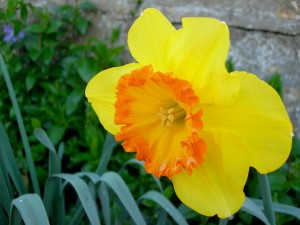 While other parts of the country are cold and snowy, a visit to Alcatraz to experience the sight and smell of these bulbs will lift winter weary spirits.

From bare rock to lush ferns

Location, location, location. Alcatraz Island, situated in the middle of the entrance to the San Francisco Bay, has always been prime real estate. In 1846, the military recognized a fortress strategically placed on the island would protect the bay against the threats of the impending Civil War. 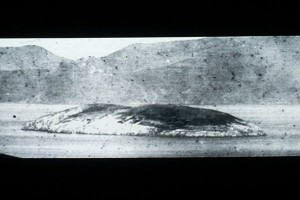 The bare rock of Alcatraz

On the naturally bare island with only a few sparse grasses, soil was needed to hold the cannons in place ringing the steep cliffs. In 1869, soil was imported from nearby Angel Island and with the soil came seeds of native plants: Baccharis pilularis (coyote bush), Eschscholzia californica (California poppy), Rhamnus californica (coffeeberry), and spores from several types of ferns.

Recent winter rains have caused the island to erupt into a lush green oasis after the dry summer months. Ferns and moss drape over walls, staircases and down hillsides. 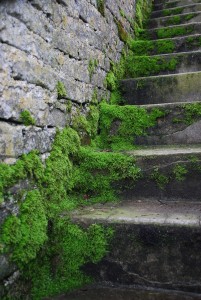 Moss growing on the stairs in Officers' Row. Photo by Shelagh Fritz 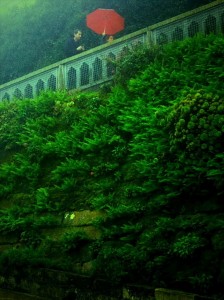 The fern wall in the rain covered with California polypody ferns. Photo by Melissa Harris

All of these ferns thrive in moist sea air. The leathery polypody and the western sword fern are evergreen, while the California polypody and goldback fern are only appreciated during the rainy winter months. 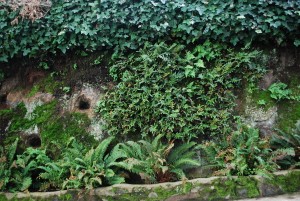 A mass of leather leaf ferns grow out of the rock with a few California polypody ferns and the western sword fern below. Photo by Shelagh Fritz

Posted in History, Plants | Comments Off on From bare rock to lush ferns 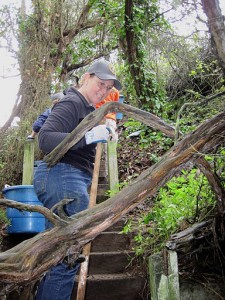 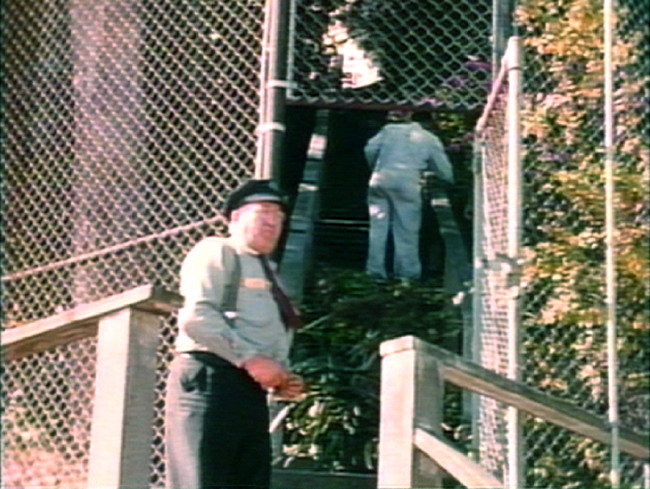 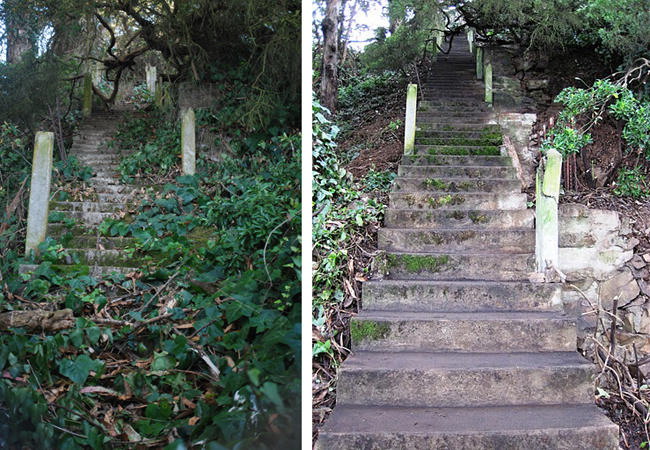