Getting better with age

One of the most rewarding aspects of working in the Gardens of Alcatraz is to see the changes over the years. While continuously caring for a garden, it is easy to not notice the subtle differences as it matures. Sometimes it takes comparing photographs taken over a span of time to be able to stand back and think ‘Wow’!

Working on historic preservation of landscapes requires diligent photographic documentation of existing conditions, work in progress, and the final result. Ideally, photos should be taken from the same vantage point. An added bonus is to have historic photos as well. 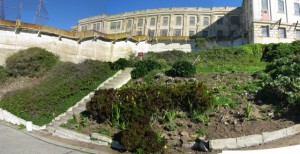 Before view of the west road terrace in 2009. Photo by Diane Ochi 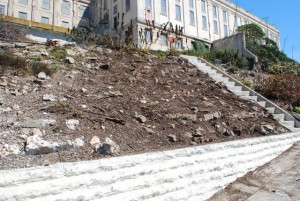 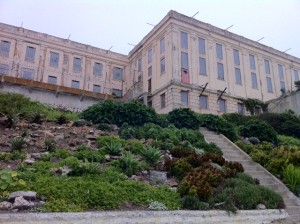 This year, the west side of the island along the roadway is doing particularly well with many succulents coming into bloom right now. Many of these succulents were propagated from elsewhere on the island and to see them flourish is very satisfying. Plants include Aeonium arboretum, Aloe arborescens, Carpobrotus edulis, Mesembryanthemum crystallinum, and Lampranthus aurantiacus. In March 2009, rocky bare soil and a thicket of Rosa wichuraiana spilled onto the roadway in this same area. A sprinkling of California poppy seeds, Eschscholzia californica, added a bit of color to the slope.

In September 2009, a volunteer group cleared the ramble of roses and the hillside was revealed. Over the next few months, succulents obtained from the Ruth Bancroft Garden in Walnut Creek, which happens to be the very first garden preserved by the Garden Conservancy, were added to the sunny slope to complement the other succulents up the road. The Ruth Bancroft Garden succulents, available to gardeners during the 1930s to 1960s, were choice plants for our Alcatraz gardens. 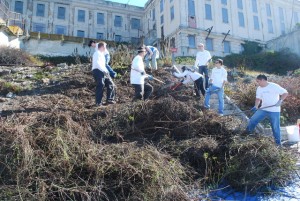 The difference in the before and after photos of this garden area is vivid. Like many things in life, gardens keep getting better with age. 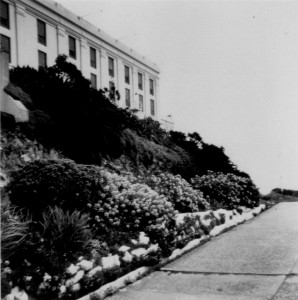 Historic photo from 1946 of the same hillside. Photo courtesy of GOGA

Posted in History, Plants, Rehabilitation, Volunteers | Comments Off on Getting better with age 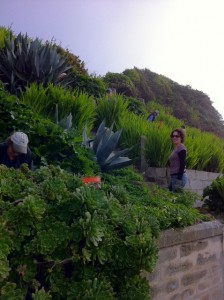 Volunteers around the Golden Gate National Parks joined in a Day of Service to celebrate Martin Luther King Jr. Day on Monday, January 17. Volunteers from the Gay and Lesbian Sierrans, along with other community members worked in the gardens trimming back Agave americana, clipping Fuchsia ‘Rose of Castile’, and pulling weeds – oxalis, grasses and invasive blackberries – from the laundry terraces. While views of San Francisco and the Golden Gate Bridge eluded us in the morning, everyone worked tirelessly in the light fog. With the group effort, three heaping piles of weeds were pulled and hauled away in the trusty garden vehicle and will be composted.

One lucky volunteer, Sabrina, definitely picked the right place to weed when she found a marble amongst all the weeds. Similar to finding a needle in a haystack, you never know what artifacts will turn up next. Another volunteer working alongside Sabrina demonstrated her luck by finding chicken bones, most likely takeout from the many seagulls visiting Pier 39. 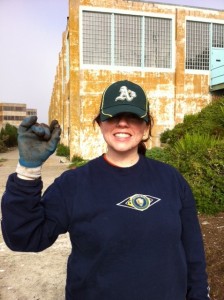 Finding a marble in the gardens. Photo by Shelagh Fritz

Thank you to all the volunteers that came out to participate in the projects around the Golden Gate. Many of the projects filled up quickly, again showing how dedicated people in the Bay Area are for giving back to their community.

There are many sea birds that call Alcatraz home. Western Gulls make up the majority of the birds with around 2000 nesting on the parade ground at the south end of the island. The parade ground will be closing to allow these birds to raise their young on February 1st to mid September.

During the penitentiary days, families of the guards also called the parade ground home. Many of the families lived in apartment buildings and tended gardens. The apartments were torn down by the government after the island was occupied by the Native Americans from 1969 to 1971 and the rubble was left. 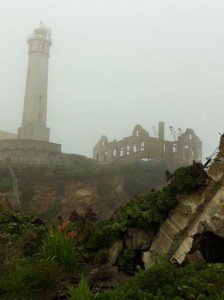 Chasmanthe growing in the ruins. Photo by Shelagh Fritz

From the remaining ruins, new life does spring. Like elsewhere on the island, the neglected gardens were overrun with aggressive ivy, honeysuckle and blackberries. The tough conditions on the parade ground allow for only the most determined plants to survive. 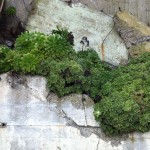 Taking a walk around the rubble piles, it is hard not to be impressed with how the Aeoniums have found niches for themselves. Spilling over concrete walls, these plants are thriving without soil, no summer water and very windy conditions. 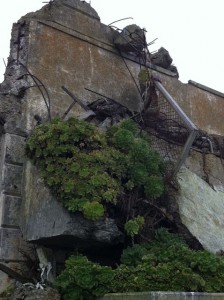 The photo opportunities alone warrant a visit to the island before this intriguing part of the island closes until September.

With the chilly and rainy weather of winter, a cozy place to work is inside the island’s cedar greenhouse located in the Rose Terrace Garden below the water tower. The temperature of the greenhouse averages 50 F during the day, even though it is in shade for most of the day.

We are busy sowing seeds for winter annuals and bulb cover for the spring. Volunteers have helped sow flats of Calundula, Lobularia, and Shirley poppies (Papaver rhoeas). We have also started summer annuals of zinnias and hollyhocks. 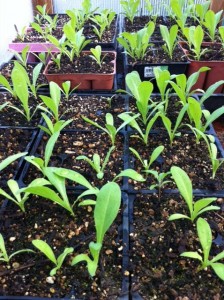 Calundula seedlings in the greenhouse. Photo by Shelagh Fritz

A fun experiment was collecting and sowing seed from the survivor artichoke. Sarah Dominsky, an intern with the Golden Gate National Parks Conservancy, harvested the thistle seed head from the garden affectionately called the Toolshed Terraces in November. 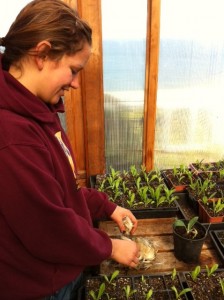 Out of more than 50 seeds sown, only one actually germinated!  This one little plant is being fussed over and was potted up into a larger sized pot last week. To help preserve the genetic material of island survivor plants, we are able to collect seeds and take cuttings of plant material. With the completion and dedication of the greenhouse to Carola Ashford this past April, we have been able to grow our own annuals, propagate perennials and continue the tradition of propagation on the island.

Posted in Plants, Volunteers | Comments Off on Greenhouse Propagation

The chilly weather this week has many Californians bundled up inside. The temperature on Alcatraz is moderated by the San Francisco Bay and we are very fortunate to be frost free; but the dampness, wind, and fog can still make any time of the year feel cold. San Francisco is in United States Department of Agriculture (USDA) Hardiness zone 10 and zone 17 to residents of western U.S.A. who refer to the Sunset climate zones.

The USDA revised the plant hardiness zone map in 1965 and again in 1990. The 11 zones aim to show the lowest temperatures that can be expected. Plants are rated for which minimum zone they can survive in.

Sunset Magazine created a 24 zone climate map for the thirteen Western states. These zones are much more detailed and precise as “they factor in not only winter minimum temperatures, but also summer highs, lengths of growing seasons, humidity, and rainfall patterns to provide a more accurate picture of what will grow there.”(www.sunset.com)

Micro climates exist even on a small island like Alcatraz. This week, with the wind coming from the north, there are a few gardens that volunteers and staff gravitate towards on chilly days. The southwest facing inmate gardens that usually get the brunt of the summer winds and fog are the perfect gardens to bask in during the winter sunshine. The low winter sun casts a chilly shadow on the east side of the island for most of the day. 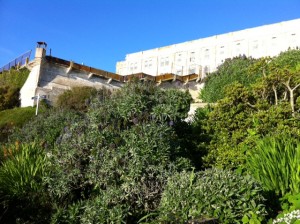 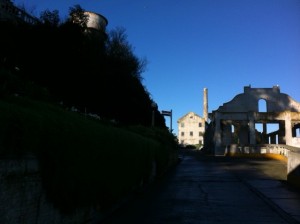 East side of the island in mid-day shade. Photo by Shelagh Fritz

Posted in Weather | Comments Off on Alcatraz Island Hardiness zone