Gardening and composting go hand in hand. Aside from the obvious benefits of returning organic matter back into the soil, recycling the garden vegetation on the island is especially important as once materials come to the island, they very rarely leave.

With the gardens, our composting system has evolved as well. When the project began in 2003, there was no designated place to compost the 40 years of overgrowth. The removed vegetation was hauled to the Parade Ground and added to the ruins of the former apartment buildings that were already being taken over by vegetation. With the parade ground closing each bird nesting season from February to September, each winter there was a race to clear and deposit the vegetation, then during the summer months work would continue and a massive pile would soon accumulate, only to be hauled away at first chance in September. 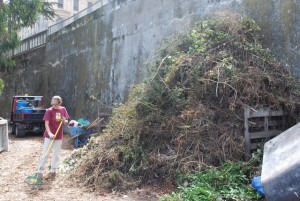 In 2007, restoration of the rose terrace began. Situated half way up the east side of the island, this garden area was historically the center of gardening operations with a large greenhouse. Logically, our rehabilitation plans recommended this area to once again be used as a center of operations, including the site of our compost.

With use of a chipper, woody vegetation (ivy, blackberries, roses and other shrub clippings) are shredded. These materials provide the ‘browns’ that are high in carbon. Our ‘greens’ come from spent flower heads, weeds that have not gone to seed, and ivy leaves that provide nitrogen. Chasmanthe floribunda also provides an excellent supply of greens but these plants require the extra work of hand clipping into smaller pieces for a quicker breakdown. 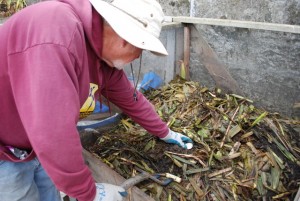 Dick checking the temperature of the compost. Photo by Shelagh Fritz

Each batch takes roughly one month to mature. The bins are located in shade and we rely on high temperatures to break down the organic matter. Dick regularly brings hops from Anchor Steam Brewery and horse manure from Marin farms. With the addition of chicken manure and topsoil the temperature easily reaches between 140 – 160 F. The highest temperature achieved has been a steamy 170 F.

After the temperature cools, red wriggler worms do their magic and work their way up from the bottom of the bins. Ideally, the worms are left for another month to add to the organic matter.

Once the batch is ‘done’, volunteer groups, especially kids, have a chance to get their hands dirty by sifting out the larger fibrous pieces that have not broken down, sorting out the worms and putting them back in the bin. For kids that have never held a worm before, it is amazing to see squeamish kids going home to ask for pet worms for their kitchen scraps.

Dick showing off the worms to kids. Photo by Diana La

Dick has also successfully experimented with composting oxalis! Volunteer gardeners separate oxalis from other weeds and deposit the corms and green tops in a designated pile. A season’s worth of oxalis is constantly turned and manure is incorporated. With consistently high temperatures, the corms are exhausted. The oxalis compost is tested for weed seeds by placing flats of the compost in the greenhouse, labeled, watered and monitored for any growth. We have never had any oxalis return.

The docent tour does take a stroll by the compost bins and Dick is usually there to let you feel the rich soil. Otherwise, be sure to look over the rose terrace railing to see the compost, you can only detect it with your nose when the bins are turned.

Posted in History, Rehabilitation, Volunteers | Comments Off on Composting on Alcatraz

Return of the Roses

Alcatraz Island was a place for life to struggle, where only the most determined could survive. The plant life on the island is no exception. Heirloom plants introduced to the island decades ago either thrived with neglect when the prison closed in 1963 or soon perished under the overgrowth.

Of the 200 species and varieties of ornamental plants that were documented in the early years of the Alcatraz Historic Gardens Project, one plant that has special significance is blooming right now – the Rose ‘Bardou Job’. 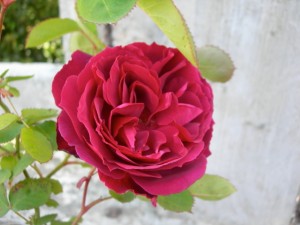 In 1989, a group of rosarians from the Heritage Rose Group came to Alcatraz to take cuttings of roses, and propagate them with the aim of identifying them and saving heirloom roses. The deep red climbing hybrid tea rose soon came to be known as the ‘Alcatraz Rose’. This rose, while having its roots on Alcatraz, has Welsh heritage. More importantly, this rose could no longer be found in Wales, but yet one rose bush was thriving on Alcatraz behind the Warden’s House. In 2000, six plants were returned to the Museum of Welsh Life at St. Fagan’s near Cardiff for the Wales Tourist Board’s Homecoming 2000 campaign.

Discovery of the rose made headlines in Great Britain and in San Francisco.

Cuttings of ‘Bardou Job’ were grown up and two plants returned to Alcatraz to be planted on the Rose Terrace, located below the water tower in 2007. Visitors are able to see this unique rose on the free docent led garden tour, every Friday and Sunday morning. Visitors will also be able to see other heirloom roses, ones that survived on the island and others that were introduced with the restoration project. Roses were chosen by the time period when they could have been grown on the island. In other words, all the roses on the island would have been introduced to the plant trade before 1963. For Bay Area gardeners, the roses on Alcatraz are a selection of plants that have minimal powdery mildew, black spot, cope with marine conditions and are reliable bloomers.

For rose enthusiasts, spring into summer is the ideal time to plan a visit.

Posted in Gardens of Alcatraz, History, Plants | Comments Off on Return of the Roses 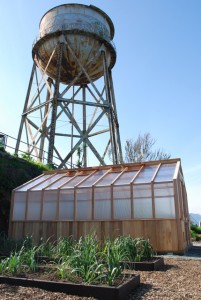 The completed greenhouse in the rose terrace. Photo by Shelagh Fritz

The greenhouse is dedicated to Carola Ashford, the first project manager for the Alcatraz Historic Gardens Project, who past away February 24, 2009.

Carola began with the Garden Conservancy as the Marco Polo Fellow in 2004, later to become the project manager. Her meticulous research for historic photos, letters and interviews with past residents are visible in the gardens she designed. From the beginning, she had the vision to see a garden through all the overgrowth. As a lifelong gardener, she had the zeal and passion to tackle the ivy, blackberries and honeysuckle with her own hands, even on a few occasions being told to get down from a precarious ledge.

Inside the greenhouse a plaque displays an excerpt from her work journal. In her flowing handwriting, she writes of tackling the toolshed gardens – “I just love how evocative that garden is…wonderful array of terraces w/ Echium, succulents, acanthus and more Chasmanthe than is at all necessary.” February is exactly the time of the year when this garden is in its prime, all the plants she wrote of are bursting with flowers, even the Chasmanthe. 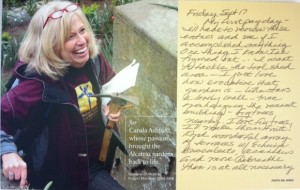 The Gardens of Alcatraz has served many purposes for the people that created and tended them over their long history. From the Victorian ladies who called Alcatraz home in the late 1800s to both the military and federal inmates, who found that gardening provided an escape and solace, to the volunteers and staff that brought the gardens back to life, each person continuing the tradition of gardening. Carola came to the gardens at a vital time, and the gardens are thriving today with her touch. To continue her legacy, you can make a contribution to the Carola Ashford Alcatraz Gardens Fund.

Posted in Gardens of Alcatraz, Rehabilitation | Comments Off on Remembering Carola Ashford

Volunteers took advantage of the sunny weather this morning to weed wild radish, Raphanus raphanistrum, on the southern facing slope in front of the cell house. This annual weed, a member of the mustard family – Brassicaceae – has naturalized in North America from its native Eurasia. 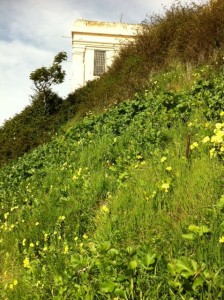 This overgrown section of the slope was stabilized in 2007 with waddles and jute netting but has since become overgrown with radish, Lavatera and oxalis. This is the first year that we are attempting to control the radish. Our intent is to reduce the number the weed seeds so that in future years, this slope will be planted with the Persian carpet, Drosanthemum floribundum that was historically planted on this slope during the 1920s. 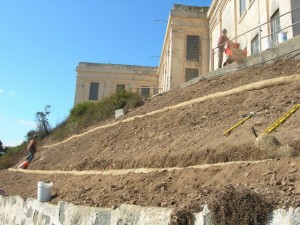 The radish is just beginning to establish itself for the summer by sending its long taproot deep into the soil to find moisture. Volunteers took on the challenge of pulling the entire root, otherwise the plant will continue to grow. Either it was the hard work or the scent of fresh radish but like other radishes, these roots are edible and soon the volunteers were nibbling at the roots. The flowers are also edible and are easily identifiable with four petals ranging in color of pale yellow, apricot, pink and white. When considering consuming any plant from the wild, it is vital to be confident that you have positively identified the plant. 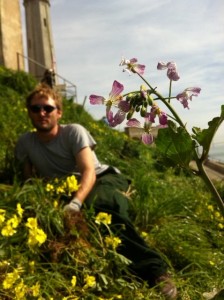