Tool shed has a new look

On the west side of the island, tucked under the New Zealand Christmas tree, Metrosideros excelsa, is the historic tool shed, originally built by inmates in the 1950s. The tool shed has a million dollar view towards the Golden Gate Bridge and the Pacific Ocean beyond. Without a doubt, this view was a constant reminder of a world beyond the reach of the inmates that worked in these gardens. 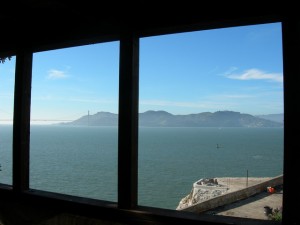 View of the Golden Gate Bridge and the Marin Headlands. Photo by Shelagh Fritz 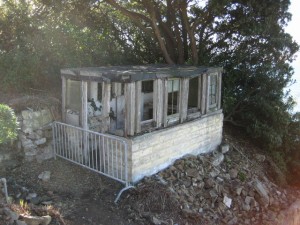 The toolshed in 2009. Photo by Robin Abad

The tool shed, like the gardens, was abandoned in 1963, and could not escape the weathering effects of Pacific storms and the relentless summer winds and salt air. The tool shed was repaired by the National Park Service in the late 1970s and again by garden volunteers in the spring of 2010 with help from the National Park Service maintenance team. The tool shed was in a bad state of repair with the roof falling in and most of the wood structure rotting away. The cement block base walls were still in fair condition and only needed minor patches. Just like the inmates had used scrap lumber on the island in the original construction, we scouted re-use stores to find a door, suitable windows, and flashing for the roof. This past month, garden volunteers applied primer and a fresh coat of ‘Presidio White’ paint to finish up the restoration. 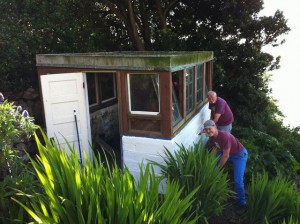 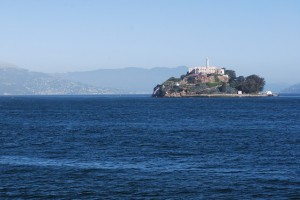 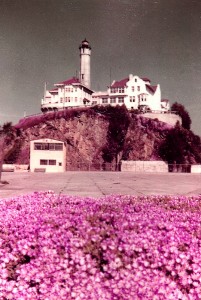 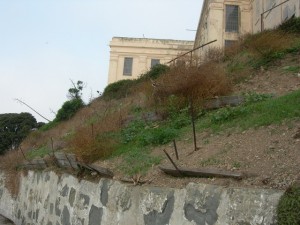 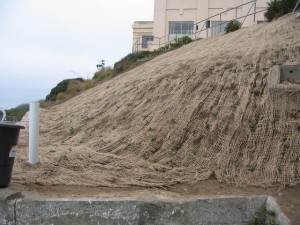 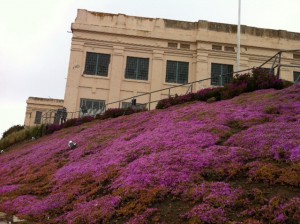 Posted in History, Plants | Comments Off on Cheerful face towards San Francisco

Bearded iris has been a long-time garden favorite that even found their way onto the most notorious prison island. There are five cultivars of bearded iris that are survivors from the prison days, blooming every May without fail. One survivor, Iris ‘King’s Ransom’ blooms twice a year, early spring and again in the fall. The other four cultivars are still unidentified, and we are working at finding out more about them. 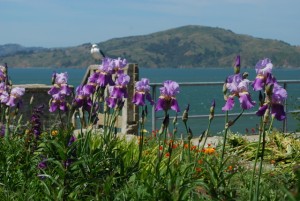 My favorite iris is in bloom right now in Officers’ Row. This clump of iris was entirely covered by ivy and blackberries until 2003, when they were cleared and began to flower again. The 3’ flower stalks are heavy with lavender blooms that catch visitors by surprise with their bubble gum fragrance. Another survivor iris smells like root beer, clearly not your average modern iris. 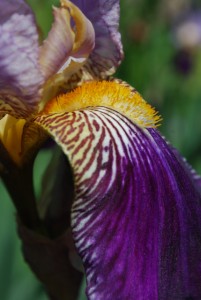 Up close. Photo by Shelagh Fritz

The only thing better than five cultivars of bearded iris is more bearded iris! The Garden Conservancy’s first preservation project, the Ruth Bancroft Garden in Walnut Creek is a garden haven for heirloom bearded iris. Ruth Bancroft’s collection matches the time frame of the penitentiary gardens, and so Alcatraz has received divisions of her iris for the past four years. We now have just over 30 cultivars of heirloom iris in a wide range of vibrant colors and rich scents. The iris are not troubled by the dry summers, winter rains or the salt breezes and fog. Occasionally, there will be aphids on the leaves but these are easily washed away. 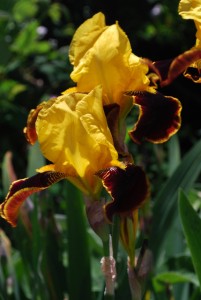 The iris will be in bloom for only another two weeks, so now is the time to walk your nose around the island finding these heirloom garden beauties.