A Busy Month of Volunteering

September has been a very productive month in the gardens with the annual cleaning up of dead vegetation in areas that have been off limits because of the nesting seabirds.

With the Garden Conservancy’s one full-time and one part-time gardener staffing the garden project, volunteers are a vital resource for tackling the large closed areas quickly. This month, seven corporate work groups got involved in garden work. Wells Fargo had five groups on the island and Government Services Association (GSA) and Zoomerang made up the other two work groups. For many of the participants, volunteering in the gardens is not only their first taste of gardening but also their first visit to Alcatraz. 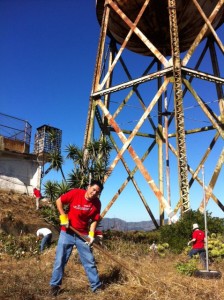 The work groups are organized by team leaders within the companies and then employees can sign up to help out. Many organizations in the Bay Area strongly support community service and encourage giving back to the community through volunteerism. The United Way hosts a ‘Week of Caring’ mid-September that brings corporate groups and non-profit groups together. The coming together of these groups has great advantages. For the groups themselves, they have the opportunity to work in unique sites (you can’t get more unique than Alcatraz) and to develop their team skills by working with colleagues in an environment different from their office. The non-profits not only benefit from the additional labor but can raise general awareness of national treasures that need to be preserved.

Each group is provided free passage to the island and is given a quick history lesson upon arrival. How gardens came to be on a barren island is an intriguing story in itself and adds a layer of history to Alcatraz that most are not aware of. 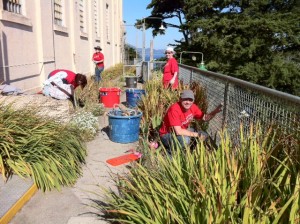 Wells Fargo tending the garden on the East side of the cell house. Photo by Shelagh Fritz

The groups are then provided with tools and head up to the work sites. This month’s groups assisted with a range of garden projects: cutting back ivy, sifting compost, propagating Persian carpet ice plant, cutting back dormant chasmanthe 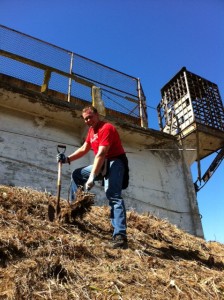 The satisfaction of digging out a blackberry root is hard to beat. Photo by Shelagh Fritz

and removing invasive radish and grasses. The tasks are invigorating and varied enough to accommodate everyone’s physical abilities. A fair amount of planning does go into preparing for each group – thinking of work projects, setting up the tools at the work site, ensuring a safe work place and putting away the tools afterwards.

Thank you to everyone that supported the Gardens of Alcatraz this month.  In total, 95 people from 5 groups contributed 285 volunteer hours!

To get involved, contact the volunteer coordinators to arrange a group work party.

Posted in Volunteers | Comments Off on A Busy Month of Volunteering 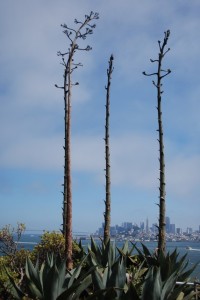 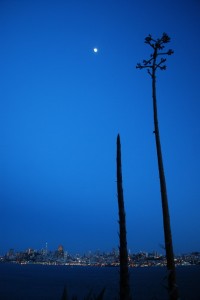 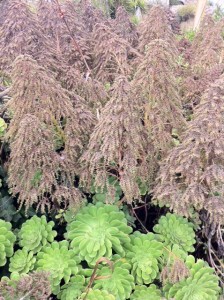 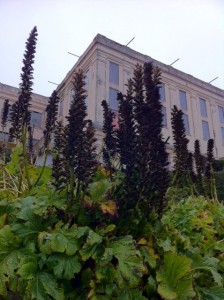 Posted in Plants | Comments Off on Finding Beauty

Gardening by Trial and Error

Posted on September 9, 2011 by Shelagh Fritz

Much of gardening is learned through experience – by working in the soil, getting your hands dirty and being open to make changes.

The inmate gardens on the west side had much to teach us about gardening on the Rock. Restoration of these gardens started in the fall of 2008 and by the spring of 2009, the overgrowth had been cleared, pathways rebuilt and new gravel added. The beds were amended and new plants were chosen. Plants were selected to give the look of the 1940s-1960s gardens that the prisoners created and tended. The original gardens resembled English cottage gardens and so we worked at finding plants that would fit, but that would also be drought tolerant. 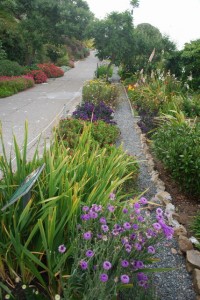 The inmate gardens in early summer. Photo by Shelagh Fritz

Plants such as Armeria maritima, Coreopsis, Dianthus, Oenethera, Cosmos, Gaillardia, Scabiosa, Linaria and Huechera sanguinea were some of the plants that we tried. The gardens looked gorgeous in the spring but by mid-summer, the unrelenting wind of the Pacific was taking a toll. Even the rainwater catchment that was installed was not enough to help all the plants through the dry summer.

We took this lesson to heart and looked for plants that could provide the historic look, be drought and wind tolerant and look really good well into October. A tall order, but not impossible.

Salvias seemed a likely candidate. While not known to have been on the island previously, they were likely to do well on the island and still give a cottage style look. This past January, we planted several different species of salvias and they are all doing well. Salvia clevelandii filled 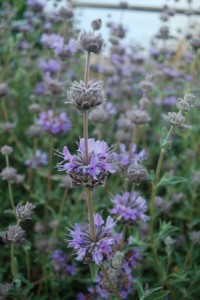 an exposed corner of the garden. The very fragrant leaves and blossoms held on until this past week, when they were cut back to encourage new growth. Salvia leucantha, Mexican bush sage, is very common in San Francisco and it has done well on the island too. Salvia nemorosa ‘East Friesdland’ has done well at the front of the border and has bloomed twice this year with cutting off dead blossoms. Salvia chiapensis, Chiapas Sage, while from the cloud forests of Chiapas, Mexico has done surprisingly well under the fig tree in the shade. Salvia microphylla hybrid is continuing to bloom and has not needed any pruning at all; autumn is actually its peak bloom time. And lastly, we also chose Salvia ‘Waverly’ for the constant pale white blooms. 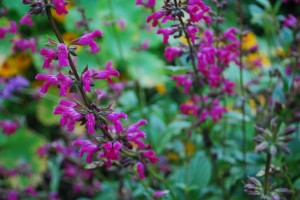 We also planted low growing evergreen perennials and shrubs at the front of walkways and tucked in annuals behind, to hide the annuals as they died back. We propagated a surviving white hebe to hide the calla lilies during the summer; and planted dwarf agapanthus and heliotrope to cover columbine, foxgloves and homeria leaves when they passed their prime.

Posted in Plants, Rehabilitation | Comments Off on Gardening by Trial and Error

Posted on September 2, 2011 by Shelagh Fritz

The fall and winter are the busiest times of the year to work on new garden projects. Mid-September to February 1st is the time when the seabirds are gone from the island and the closed nesting areas can once again be worked in; as well, the winter rains help water any new plantings.

With September here already, we are 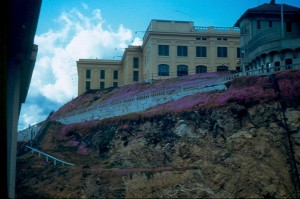 Drosanthemum covering the entire slope in the 1940s. Photo courtesy of Joseph Simpson

getting ready for this fun time of year. One big project that will be worked on is expanding the Drosanthemum floribundum planting on the cellhouse slope. Historically, this entire slope was planted with pink Persian carpet ice plant with the intention of it being visible from San Francisco.

Currently, half of the slope is planted with Persian carpet while the other half is overgrown with wild radish and grasses. Volunteers have been busy the past few months taking cuttings and propagating plugs of the tiny iceplant. The succulent is easy to propagate and rooting hormones are not needed to encourage new roots. We use our rich garden compost to start the plugs in; however the slope itself is well drained sandy soil. 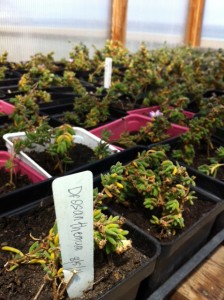 Drosanthemum growing in the greenhouse. Photo by Shelagh Fritz 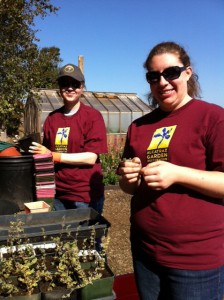 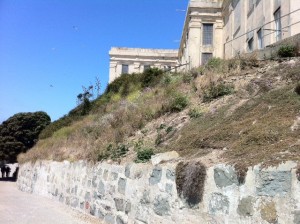 The area of the slope is quite large, approximately, 6000 square feet. The plugs are planted about 8 inches apart so we will need PLENTY of plugs to cover the area. In other garden areas, we have been successful at rooting the cuttings by planting them directly in the ground and watering right after. We will likely need to rely on this method as well to cover the entire slope.

Once established, the drought tolerant plants will help control erosion while giving the look of the manicured prison gardens.

There are also several other garden areas that can only be maintained during the winter season. For these areas, we will be cutting back overgrowth, typically sweetpea, honeysuckle, brambles and ivy that grow to their hearts content all summer. For this annual cleanup, corporate volunteer groups trade their pencils for pitchforks and help out for the morning.

Posted in Rehabilitation, Volunteers | Comments Off on New this Fall