Earlier this week, the Garden Conservancy lost its founder,

Frank Cabot. We mourn his passing and are thankful for his passion of horticulture that led him to begin the Garden Conservancy in 1989. We are very much in his debt for his vision and leadership. His accomplishments will continue to inspire us for years to come.

Following is the text of his official obituary, which he approved himself in advance.

CABOT, Francis Higginson of Loudon, New Hampshire, and La Malbaie, Quebec, died peacefully at home on November 19, 2011after a long illness. He was 86. Born in New York City on August 6, 1925, graduate of St. Bernard’s and Groton Schools and Harvard College class of 1949 where he was a founder of the Krokodiloes, he served in Europe and the Far East during World War II with the Signal Corps. He worked initially for Stone & Webster Inc. and subsequently as a venture capitalist in New York. His overriding interest in horticulture consumed his later years when he was active in the American Rock Garden Society, the Friends of Horticulture at Wave Hill, New York Botanical Garden, and the Garden Conservancy, which he founded in 1989. During these years, with his wife Anne, he created Stonecrop Gardens, a public garden for plant enthusiasts in Cold Spring, New York; founded the Aberglasney Restoration Trust to rescue and restore a sixteenth-century garden in Carmarthenshire, Wales; and enlarged his parents’ garden in La Malbaie, Quebec, into what has been described as the most aesthetically satisfying and horticulturally exciting landscape experience in North America. His book, The Greater Perfection, received the Council of Botanical and Horticultural Libraries’ 2003 Literature Award, and was described as “one of the best books ever written about the making of a garden by its creator” by The Oxford Companion to the Garden (2006). He was the recipient of numerous awards from horticultural societies, including the Gold Veitch Memorial Award of the Royal Horticultural Society. He was also named a Chevalier of the Order of Quebec as well as a Member of the Order of Canada in recognition of his efforts, through his family’s Quatre Vents Foundation, to preserve the patrimony of Charlevoix County, Quebec. He is survived by his wife of over 62 years, Anne Perkins Cabot; by three children: Colin and wife Paula of Loudon, New Hampshire; Currie and husband Thomas A. Barron of Boulder, Colorado; and Marianne and husband James S. Welch of Prospect, Kentucky; nine grandchildren; and five great-grandchildren.

Funeral services will be private. A memorial celebration will be held in the garden of Les Quatre Vents for family and friends in 2012 at a date coinciding with the inception of spring and the peak of the primula moment. Contributions may be made to the Garden Conservancy, P.O. Box 219 or the Quatre Vents Foundation, P.O. Box 222, both at Cold Spring, NY 10516, or to the charity of your choice.

Posted in Uncategorized | Comments Off on Giving Thanks

The Gardens in Review

Usually, the dead of winter is when gardeners haul out their stashes of seed catalogues and start planning for next year. On Alcatraz, we never receive any frost and are lucky to enjoy year round gardening, so we skip an obvious break and instead start planning for winter and early spring annuals during fall.

Planning for next year involves examining the past year; 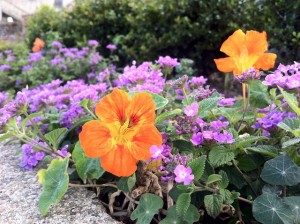 noting which plants did well, which ones need to be served their notice, and plant combinations that were striking. Some of the best plant combinations were ones that were created by chance. Nasturtium, Tropaeolum majus, was introduced to the island in 1924 and self-sows where it pleases. The whimsical seeding finds itself amongst contrasting plants – purple trailing verbena, magenta Pelargonium ‘Prince Bismarck’ and bright pink Persian carpet (Drosanthemum floribundum) to mention a few. 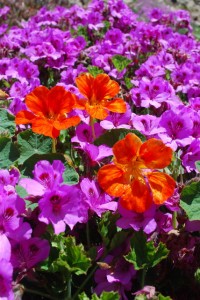 The annuals in the Inmate Gardens on the west side of the island did very well this year, especially the calendula. The calendula were sown in the greenhouse last December, planted out at the end of January and bloomed continuously through the summer. We cut them back in late September and they are blooming again. The cheerful yellow blooms contrasted nicely with many of the other garden plants. 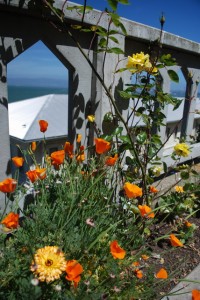 Expecting the calendulas to be replaced by summer annuals, we had sown many flats of snapdragons to be their replacements. But with the calendulas doing well, we had to find other homes for the snapdragons. Tucking them into pockets around perennials was easy. Interestingly, the snapdragons were slow to grow in the east side Officers’ Row gardens but flourished on the west side of the island. 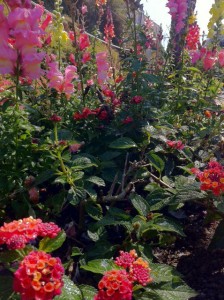 A native, California fuchsia, Zauschneria californica, was planted last year and finally flowered this past summer. The plant has soft grey leaves and bright orange flowers that complement the other plants growing near – purple agapanthus, pink Salvia chiapensis, and the freely growing nasturtiums on the hillside above. 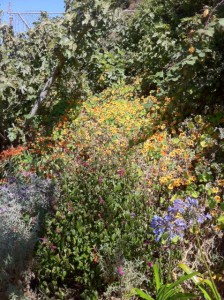 Another combination that did well was the purple annual flowering tobacco, Nicotiana alata growing with purple statice or sea lavender, Limonium perezii. The flowering tobacco self-seeds but not obnoxiously and the new plants are easy to transplant. 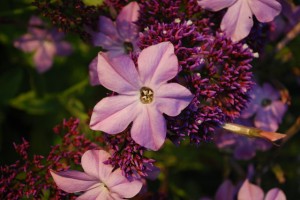 One of the new plants that was tried this year was butterfly weed, Asclepias tuberosa. The plant flowered but did not gain much height. We hope that monarch butterflies that pass through the area will stop in the gardens. Another new introduction to the island was lion’s tail, Leonotis leonurus to the west side lawn borders. Being a member of the mint family from South Africa, the evergreen shrub should have done very well on the island; but the plant was likely missed during hand-watering the borders and it did not make it. However, it will be worth trying again this coming year. Once established, it is very drought tolerant and the masses of orange flowers attract butterflies.

A plant that has had its final year on the island is the common purple cone flower, Echinacea purpurea. A row of these were planted in Officers’ Row in 2007 and every year I hope they do better. They start out blooming well with healthy leaves but then they decide they are finished and refuse to grow. Luckily, we had plenty of snapdragons to fill in around them.

Freddie Reichel, secretary to the warden from 1934 to 1939, wrote in a letter “I kept no records of my failures, for I had many – the main thing was to assure some success by trying many things and holding on to those plants which had learned that life is worth holding on to even at its bitterest”. These words are still true today, except that we keep better records of our successes and failures.

Posted in History, Plants | Comments Off on The Gardens in Review

Last week I travelled to Miami, Florida to participate in a conference hosted by the American Public Gardens Association. The theme of the discussions was ‘On the Ground: Putting Preservation into Practice’. Listening to people from gardens all over the country 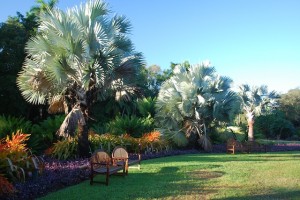 speak the language of historic preservation – Cultural Landscape Inventories, Cultural Landscape Report, As-Built Drawings and Maintaining Design Intent – was very informative, especially as each of us could relate to the lessons learned through hindsight.

I was invited to speak about lessons learned with the Historic Gardens of Alcatraz Project. Our project began in the later part of 2003, and now, at the end of 2011, while the project has been extremely successful in accomplishing our mission of rehabilitating five garden areas and interpreting their significance to the public, there are a few practices that could have been carried out slightly differently. 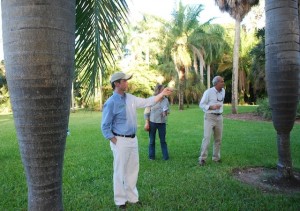 Palms capable of withstanding hurricanes are being grown at Montgomery Botanical Center, as well as many endangered palms. Photo by Shelagh Fritz.

Starting out, there were limited funds topurchase a chipper a garden vehicle. Both pieces of equipment would have helped out immensely with the early gardening work of clearing 40 years of overgrowth. The accumulated biomass amounted to huge piles that was then hauled away mostly by wheelbarrow to decompose on the island’s Parade Ground. Today, we have our own chipper, a garden vehicle and most importantly, a designated compost site where 99% of our biomass is composted to be recycled back into the gardens.

Documenting changes and progress to the landscape is vital, especially when working with a historic site. The National Park Service holds an amazing collection of historic photographs that show the gardens and the landscape in the military and penitentiary eras. The photographs from the late penitentiary, 1940s to the 1960s, were used to design the gardens that visitors experience today. Taking pictures of the overgrowth from the same vantage point of the historic photographs was done for some garden areas but unfortunately, not all. Having a complete series of photographs of the historic, before, and after rehabilitation, and then continuing the series each year afterwards at different times of the year illustrates the work accomplished. A photo really does say a thousand words. We have used our before and after photos to apply for grants and on our website as well.

Lastly, funding for our project has been provided through many grants and donations -large and small. A federally supported grant, Save America’s Treasures, was awarded in 2006. Matching funds were required to be raised, which the Garden Conservancy was able to do. The combined $500 000 provided the funds for the rehabilitation work through to 2009. However, since 2009, the project has largely relied on donations. Long-term sustainable funding for these reclaimed historic gardens will require creative solutions.

One could wonder what gardens in Miami have in common with the Gardens of Alcatraz? We had the opportunity to tour the gardens of Vizcaya, Fairchild Tropical Botanic Garden, Montgomery Botanical Center and the Kampong. The plant material in these gardens could not be more different than 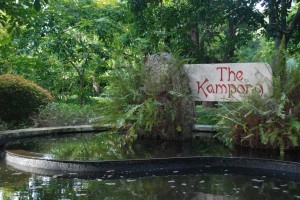 Alcatraz. But, the horticulture history with each of these gardens is rich. Each of these gardens continue to carry out their owners’ original intent, as we do on Alcatraz. Botanic gardens provide vital homes for historically significant plants that are often rare and threatened in the wild. When possible, seeds are collected and distributed to botanic gardens around the world to help insure their survival. On Alcatraz, we not only preserve heirloom plants that were introduced long ago, but we also preserve the past by telling the stories of the island’s residents that worked and cared for the gardens. Preservation of historic gardens – whether it be a home garden, large estate, or a National Park, protects history.

Posted in Rehabilitation | Comments Off on Historic Landscapes