Volunteers give a Saving Fix to Historic Terraces

Volunteers have been steadily working the past three weeks stabilizing the inmate built terraces on the west side of the island. The garden area referred to as the laundry terraces, was developed and tended by penitentiary inmates after the 1930s and was cared for until the maximum prison closed in 1963. The original terraces are still standing and survivor plants dot the terraced hillside. However, the terraces and the access stairs are in need of repair. 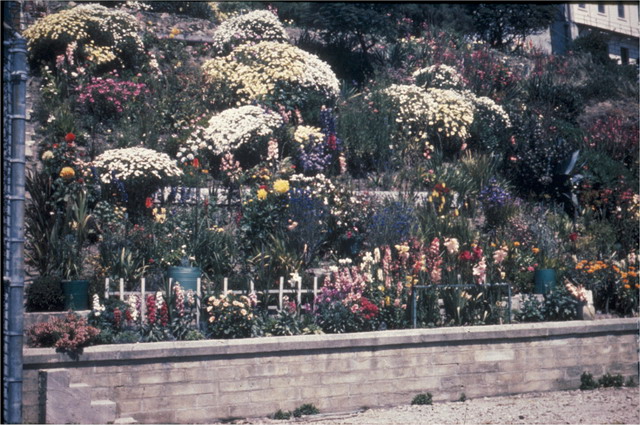 The laundry terraces during the Federal prison era. Photo by J. Simpson 1942-1946c 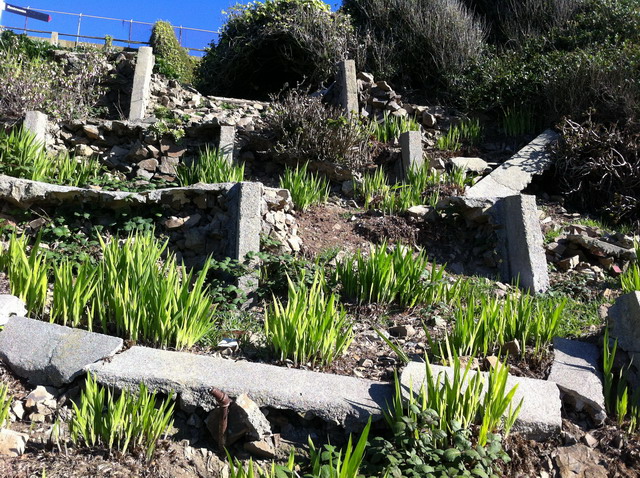 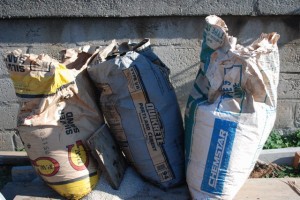 and mason, all repairs done to the terraces must match the existing historic materials. Most significantly, the mortar that we use to cement the concrete blocks back together must be accurate. For this, we mix the mortar using a ratio of 8 parts sand to 2 parts Type 2 Portland cement to 1 part lime. The volunteers love this part of the Alcatraz experience. One of my long-time volunteers explains that to be a gardener out here, you are also a carpenter, a mason and a plumber. 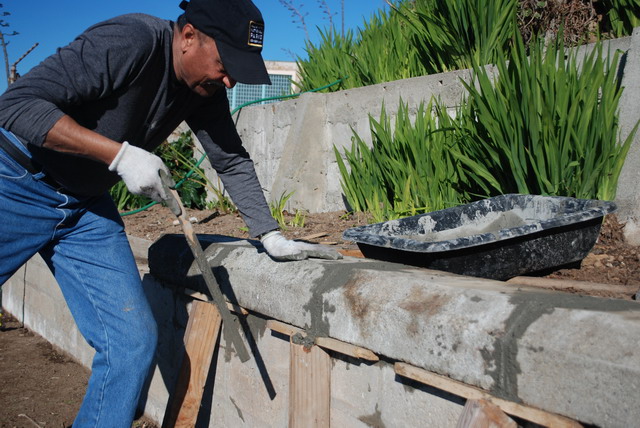 These historic terraces are closed for public accessed and we are only able to work in this area from September to February.  A large colony of Brandt’s cormorants call this area home the other months of the year and this vital nesting site would be disturbed. Still, it is important not to allow these terraces to further degrade and we will be working diligently over the next few years to make the necessary repairs.

Interestingly, a volunteer group, the Bay Area Whaleboat Association, weeded the terraces December 10 and uncovered never seen before inmate graffiti. They found numbers etched into cement that formed a basin underneath a spigot – perhaps the numbers correspond to inmates that did work in this garden area? The Federal inmate records held at the National Archives in San Bruno will hopefully yield some answers. 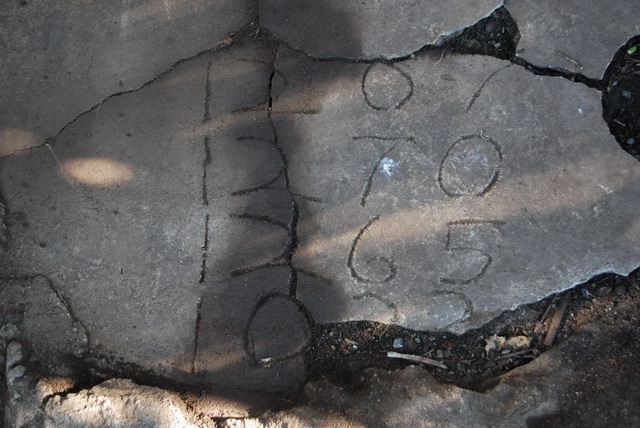 Numbers etched into the cement that once formed a drain basin under a spigot. Photo by Shelagh Fritz

Carola Ashford, the garden’s first project manager, described the garden work as “garden archeology”. And, it certainly is. The garden restoration is about to enter its ninth year and we are still discovering the gardens.

Posted in Artifact, History, Inmate Gardeners, Rehabilitation, Volunteers | Comments Off on Volunteers give a Saving Fix to Historic Terraces

Overlapping Worlds of Art and Gardening

The world of gardening and art often overlap; I often find gardeners who also like drawing, photography, or who partake in other crafty pastimes. One of my long-time volunteers, Margaret Zbikowski, is no exception. Margaret began volunteering in February 2006, just as the winter rains were hitting. She recalls “it was February and knee deep in mud; the blackberries were the target and I began to wonder if I was able to do this hillside gardening”. 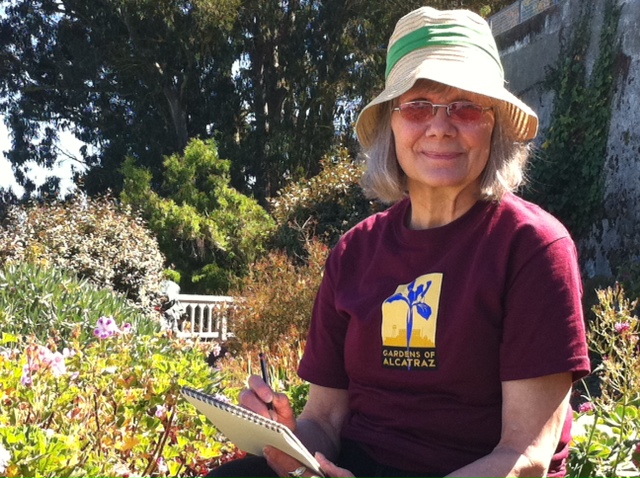 Margaret drawing in the Rose Terrace. Photo by Shelagh Fritz

Aside from tugging at the stubborn blackberries, Margaret applied her librarian skills to organize the island’s staff library; but her childhood love of drawing plants found her a special niche on the island. 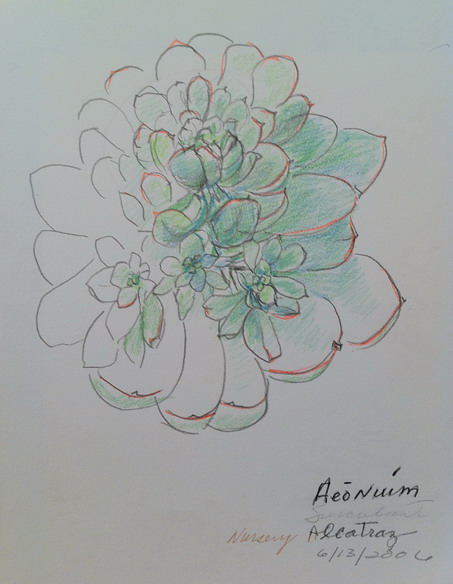 Raised in rural Michigan, Margaret’s mother would name plants to her when she was very small. The large lot next to their home was planted as a Victory garden and was a haven for the three-year-old Margaret, where she would sit and watch the plants. Impressively, as a three-year-old, Margaret remembers smelling her neighbors mint bush, “This all was a marvelous world to me”.

At age ten, she would roam on the family’s ‘back 40’, drawing trees, 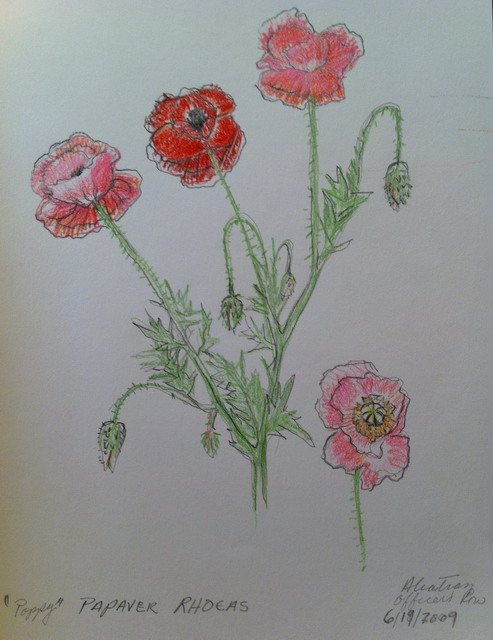 plants, mosses and leaves. “No-one in my family said anything about my drawing, so I continued happily. At school it was harder, as someone told I could draw and everyone wanted a portrait right there, right now.  I always gave these drawings to the fools.  That’s why I prefer PLANTS.”

Margaret has never had any formal training, other than taking lessons at the local town Museum of Art for the summer months, which was considered ‘appropriate’ for all young ladies. Apparently, only students seemed to notice who had talent. Margaret did ask to be sent to an art school in Chicago, but sadly, the answer was ‘No’.

But, natural talent can never be discouraged and Margaret continued to draw, and expanded into designing and making knit sweaters. Her San Francisco apartment is a treasure trove of her passions – books, paintings, orchids, and her drawing notebooks of Alcatraz plants.

Leafing through her notebooks, many of the drawings catch my eye. I wonder how she can capture the essence of the plants with such few pencils and with such simple looking drawings? On average, Margaret takes about 20 minutes to do a drawing, but has worked on one a lot more when she is not quite satisfied. 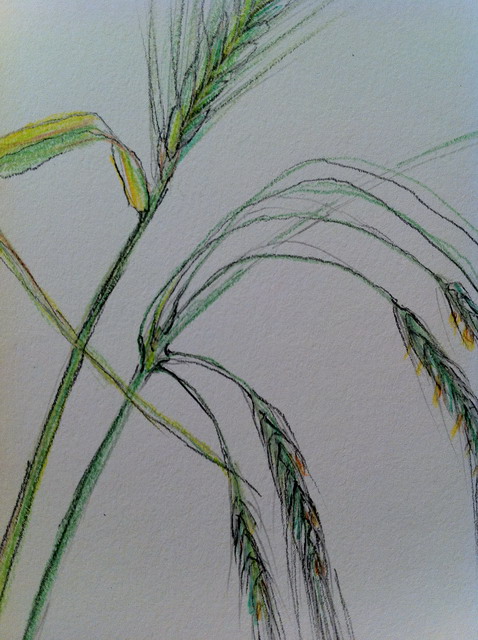 A closeup of Margaret's grasses. Photo by Shelagh Fritz

Amazingly, penitentiary inmates were privileged to be allowed ‘landscape drawing’ and must have spent hours gazing at the plants, not to mention the City and freedom, lying just beyond.

One inmate, George Hecht, was sentenced on kidnapping charges and was sent to Leavenworth Prison in Kansas and was later transferred to Alcatraz for an escape attempt. Hecht spent 1944 to 1952 on Alcatraz and his work detail was for the inside garden by the incinerator on the West Side. An article in the Washington Post dated July 1949 tells of a local San Francisco artist who went to teach evening classes on Alcatraz to help with the creative program. George must have benefitted from this program as he produced many paintings during his time on the Rock. In fact, five paintings from Alcatraz were exhibited in Paris, France in May 1951. Amazingly, after George passed away, his children found in his attic his paintings from his time on Alcatraz. His years on Alcatraz were not his happiest and yet he held onto his art that he had created during his time there. 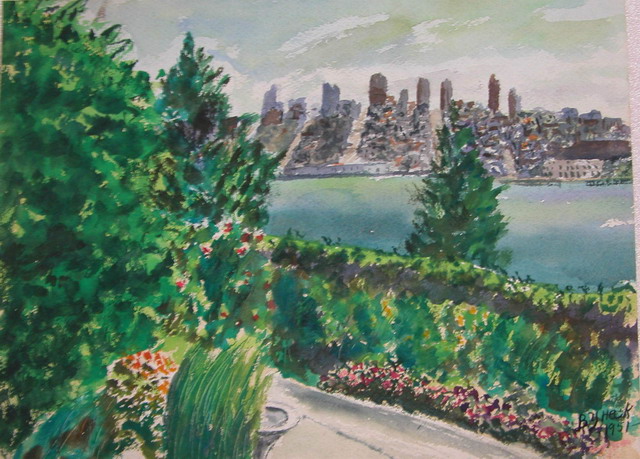 Inmate painting of the inmate gardens and the city beyond. The painting was done by George Hecht in 1951.

I do wish more visitors would come armed with paper, pencils and an extra 20 minutes to sit in the gardens, take in the moment and sketch a few plants.

We have just launched a new outreach program for island visitors called Discovery Table. The Discovery Table aims to engage visitors with interactive displays themed on the Gardens of Alcatraz. With the entire island to use as a resource, we want to share with visitors captivating information about the gardens that they otherwise would not learn about through our garden tours, brochure or website. We want to draw people’s attention to the details of the garden that might otherwise be missed.

The Discovery Table invites kids and adults to use their senses to experience the gardens in a different way. In only its second week, we have covered drastically different topics such as ‘Life on the Rock with Lichens and Moss’ and ‘Nose around Alcatraz: Scented Plants in the Gardens’. More topics to come will have visitors watching hummingbirds zip around the purple blossoms of pride of madeira, Echium candicans, getting your hands dirty with a demonstration of our worm farm and our award winning compost; as well as learning about how the succulents on the island survived without care for over 40 years. 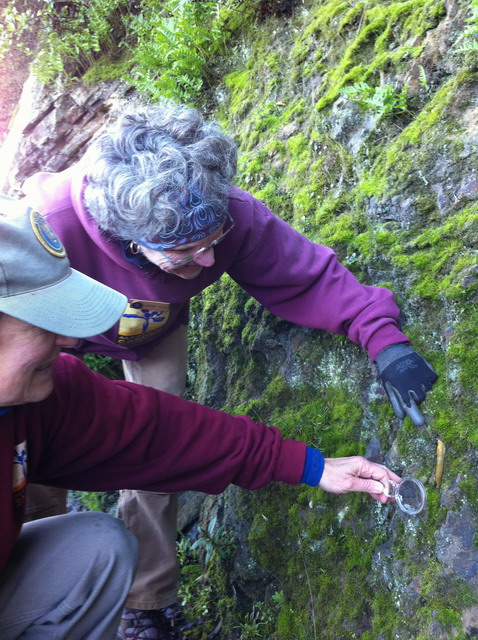 Corny and Marney point out a banana slug to visitors. Photo by Shelagh Fritz

the premier Discovery Table to introduce visitors to Life on the Rock, literally. Using a banana slug to draw people in, visitors were given a hand microscope to take a closer look at the sandstone that makes up the island. A surprise for many, lichens and moss have found their way into many niches on the rock and brick that make up Alcatraz. Just like the residents that called Alcatraz ‘home’, lichens and moss have to cope in the harsh marine environment to survive. As Corny and Marney found out, lichen and moss cope with chilly temperatures in the winter. Armed with hand microscopes, visitors could see the lichens were ‘flowering’ and could appreciate the variety of colors with the many species of lichen that are living side by side. 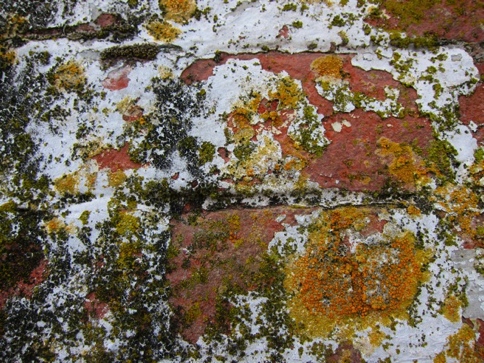 The second Discovery Table was presented yesterday on a calm, sunny day; a perfect day to invite visitors to follow their nose around Alcatraz and learn more about the scented plants in the gardens. Many of the heirloom plants in the gardens – bearded Iris ‘King’s Ransom’, Rosa russeliana, daffodil Narcissus ‘Grand Soliel d’Or’ all have wonderful scents that remind visitors of their grandmother’s house. Old-fashioned garden plants such as cherry pie, Heliotropium arborescens and nasturtium, Tropaeolum majus, and sweet alyssum, Lobularia maritima, along with recently introduced plants to the island such as pineapple sage, Salvia elegans were presented to visitors to sniff and were then asked what scent they detected. It was interesting to hear the responses: the expected answers such as vanilla, peppery, honey, and pineapple versus the surprise of hearing that cherry pie reminded one young visitor of play dough. 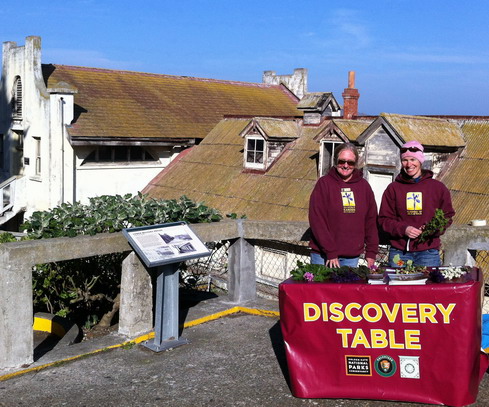 A long-time garden volunteer commented ‘You can always tell what season it is by how a visitor asks “What’s that smell?”’ During the winter and spring, island gum trees, Eucalyptus globulus, delightfully fragrant the air. However, during late summer and fall, the island is home to over 3000 nesting seabirds and their guano permeates the air.

I like to think that the small pleasures in the gardens enticed the inmate gardeners to stay on their best behavior in order to keep the privilege of working outside. I hope these same pleasures will entice visitors to stop by our Discovery Table and learn more about the fascinating gardens.

Posted in Gardens of Alcatraz, Plants, Volunteers | Comments Off on Come Discover Alcatraz