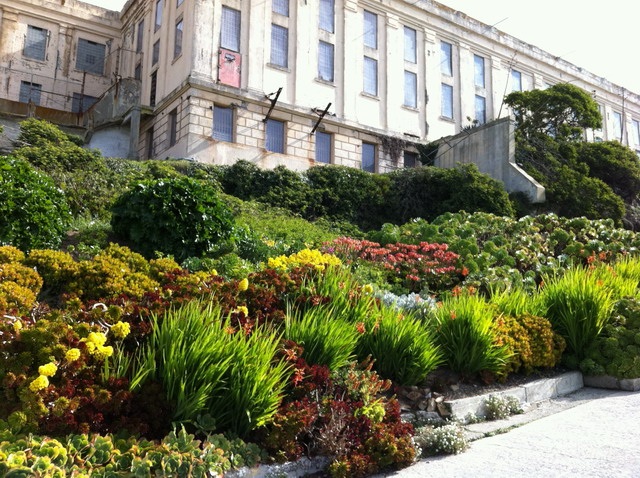 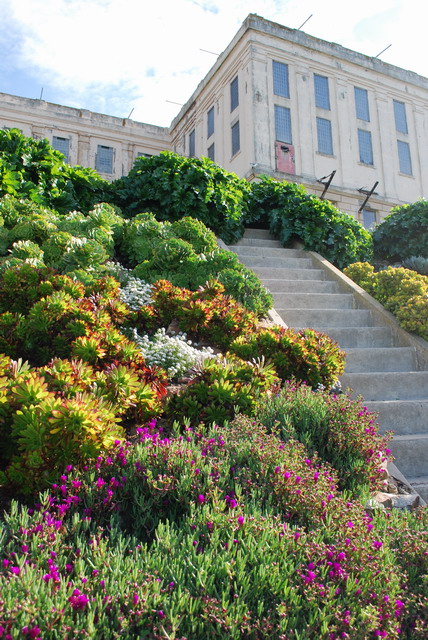 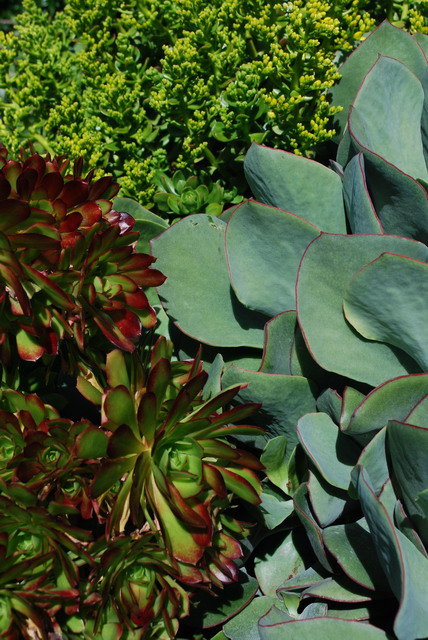 Posted in Plants | Comments Off on Superior Succulents

The Rock is many things to many different people. For some visitors, it is a trip of a lifetime, something that they must see. For past residents, it can be a place of happy memories or of sad times (depending on which side of the bars you were on). For Bay Area residents, perhaps it is just a landmark in the middle of the Bay, a tourist trap that is best avoided. For others – volunteers and staff, the island holds a special place that we look forward to being each day.

For me, this week held a strange combination of people from all those categories.

On Tuesday, I was able to show the gardens to a couple from New Jersey whose daughter had raved about the gardens. The couple had put the gardens on the top of their list of things to see while they were in San Francisco.

My volunteers trooped onto the island on Wednesday and as always, enjoyed their morning. Late in the afternoon, as the last boat pulled away, I was left on the island with an interesting group of people:

A film crew from the Travel Channel that were highlighting secret places to visit,

Four guys who had backpacks,

Bob Luke, a past inmate, and his lovely wife,

I could figure out how everyone related to the island, except for the guys with the backpacks. As it turned out, one of the guys, Jim Vetter, had entered the lottery system for an overnight on Alcatraz and had blogged about his stay. The volunteer group had waited five years before winning the chance to participate in volunteer work and then sleep overnight on the island. The Travel Channel picked up on his blog and contacted them to re-enact their night.

The Travel Channel was also able to 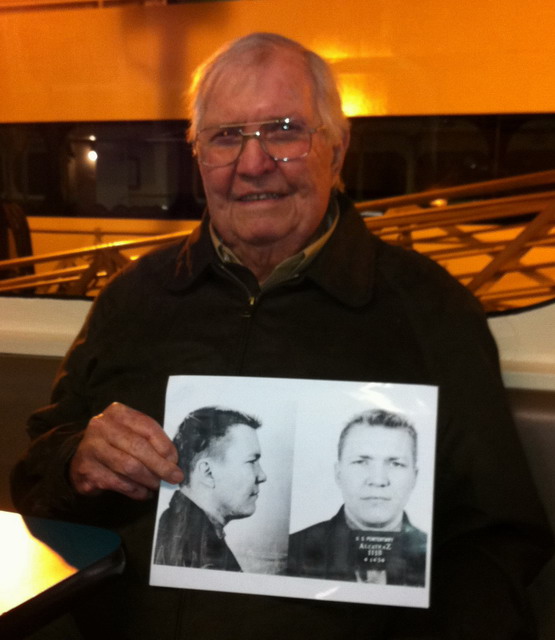 Bob Luke, a former inmate, with his mugshot when he was 26 years old. Photo by Shelagh Fritz

arrange an interview with Bob Luke, a former inmate sentenced for robbery. I had the chance to chat with Bob and his wife and never would I guess that he had a past on Alcatraz.

The gardens naturally fit with being a secret part of Alcatraz, one that catches people by surprise with the flourishing blooms.

As the week continued, on Thursday I hosted a group from the National Parks Conservation Association  that were interested in seeing the gardens. An honor to have this group on the island, they work hard to educate decision makers and the public about the importance of preserving the parks.

And finally, Friday arrived; and a new volunteer joined our crew. As an introduction to the island, she joined a group of 30 visitors for the free docent led walk through the gardens to learn about the history. Ending the week with the volunteers and the docent tour really brings home why we are here on the island – to engage the community and to share the stories of gardens  with visitors. As I reflect on my week, I realize that everyone has their own reasons for visiting National Parks, and Alcatraz especially, has something to offer to everyone. 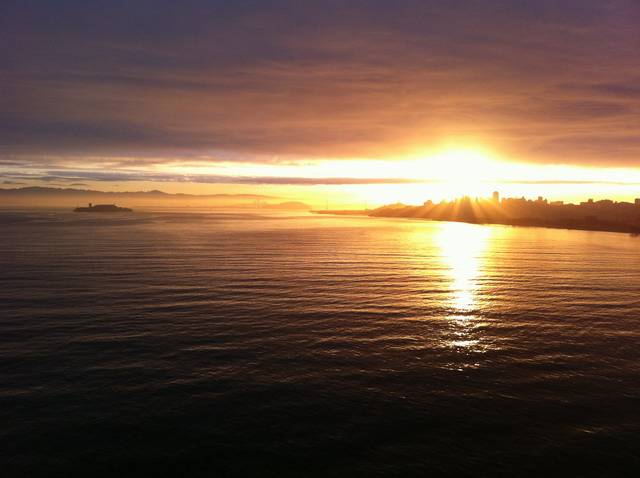 Posted in Gardens of Alcatraz, History, Volunteers | Comments Off on A Typical Week

J.J. Abrams new hit series ‘Alcatraz’ premiered January 16 and has viewers sitting on the edge of their chairs. The show also has visitors creeping over ‘Area Closed’ signs on the island, trying to get a glimpse of the secret tunnels and passageways shown on the television show.

In one episode, lead characters step over 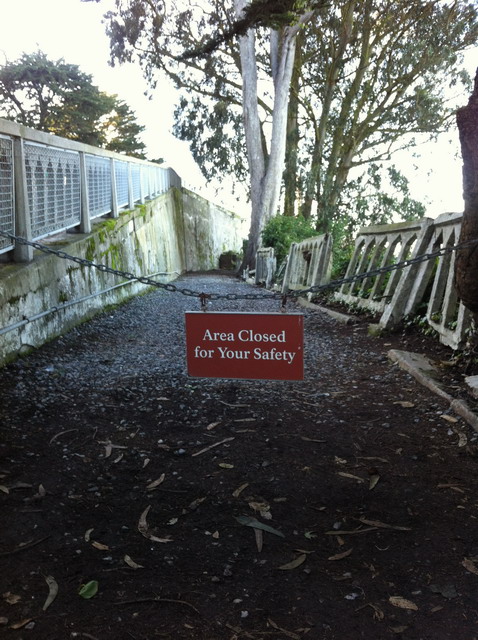 a chain and onto a gravel roadway. However, instead of leading to the underground high-tech research lab, in reality, the path leads to another secret – the gardens.

The thriving gardens are seemingly out of place on an island that was focused on punishment, containment and defense. Today, the plant life contrasts sharply against the weather worn concrete and iron bars. To fully appreciate the gardens, you have to be prepared to look over

I wonder if the television show will feature any of the inmate gardeners? Our newest webpage, Inmate Gardeners, profiles three inmates who were lucky enough to be assigned garden duties. One of the inmates, Elliot Michener, even worked in the Warden’s House, tending to household chores, serving meals and actually became friends with the Johnson family. 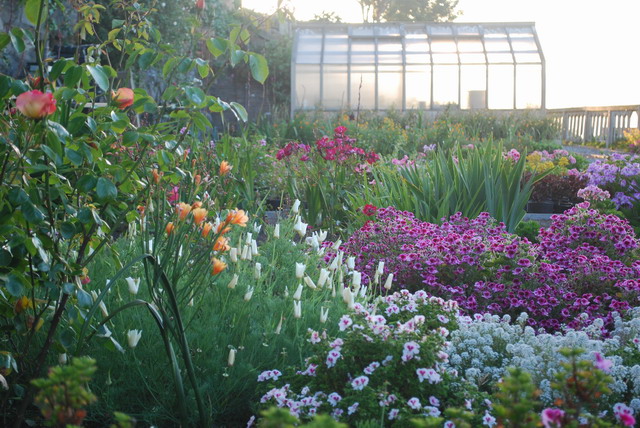 The rose terrace in full bloom in May. Photo by Shelagh Fritz

Now is the time to plan a trip to see the gardens in their spring beauty. Join us for free garden walks and we’ll take you into the secret closed areas; and show you our Alcatraz, the one that softens the Rock and looks beautiful in the sunshine and the mysterious fog. Be sure to book a ticket with Alcatraz Cruises for the 9:10 sailing on Fridays or Sundays.

Posted in Gardens of Alcatraz, Inmate Gardeners | Comments Off on Secret Alcatraz