Gardening on Alcatraz has many challenges – limited fresh water, harsh winds, chilly fog, and transporting  supplies to the island; but one challenge came as a surprise only after we had started planting in 2005 -the Western Gull. Actually 2000 of them. Victoria Seher, National Park Service wildlife biologist monitors their numbers: there were 740 nesting pairs in 2011, up from 722 pairs in 2010, but down from 1061 pairs in 2008. Each nesting pair usually lays three eggs, adding to the population substantially.

The first two years of the project, from 2003 to 2005, was intensely focused on removing overgrown vegetation built up from the 40 years of neglect. By 2005, the trough planter along the main roadway leading to the top of the island had been repaired and was ready to be planted. This was a significant event – the first planting in over 40 years! Staff and volunteers eagerly turned out that day to help plant the 330 feet of trough with ivy leaf geraniums, Pelargonium peltatum, that had originally filled the trough in the 1940s. Heirloom pelargoniums were sourced from Geraniaceae in nearby Ross, California and everyone pitched in for a fun day of planting. Standing back proudly at the end of the day, the accomplished work was admired. However, returning the next day, the plants were gone! Unwittingly, 330 feet of prime nesting material had nicely been laid out for the western gull.

Learning from our mistake, new plants are now caged – almost like being imprisoned themselves. We have become experts at building cages out of chicken wire. We have also learned to optimize the time the gulls are away from the island to give the plants the longest time possible to develop their own roots to help anchor themselves in the ground. Seabird nesting season is from February to September, so by October, we are ready for planting and the winter rains. 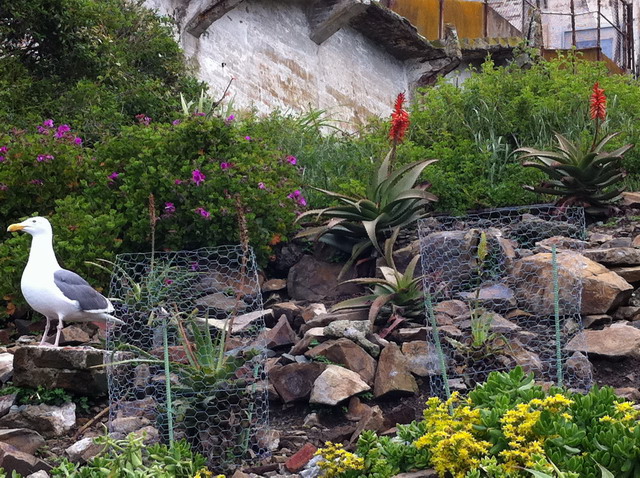 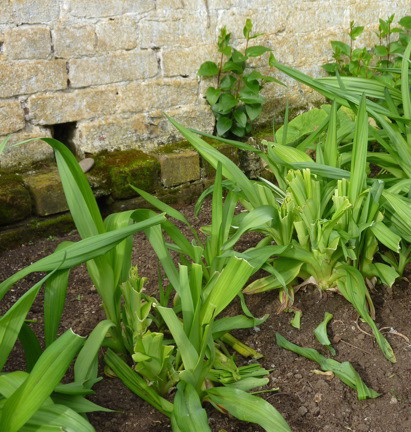 Like other gardeners that square off against deer, I have noticed that certain plants seem to attract sea gull vandalism, while other plants go unnoticed by our feathered friends. Strap-like leaves beckon to gulls; I guess this material is easy to harvest and to shape into a nest. Beds planted with Bearded Iris, daffodils (Narcissus) and cottage pink (Dianthus plumarius) in the Officers’ Row gardens have been replanted with more hardy plants that can stand up better against the gulls. This year, the gulls have taken a liking (or dislike) to the beautiful daylily, Hemerocallis ‘Kwanso’. This is a triploid flowering daylily with tangerine colored blossoms. The gulls have nipped down the plants to the bases which will make flowering unlikely this year. However, the gulls that nest 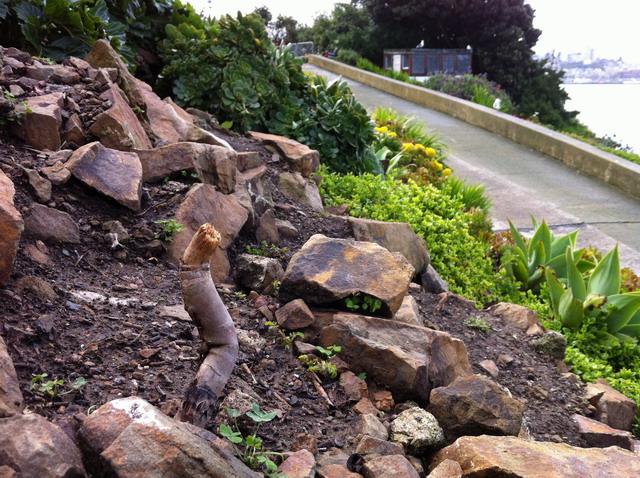 An aloe completeley destroyed by gulls. Photo by Shelagh Fritz

on the west side of the island leave the cottage pinks and bearded iris alone and choose to peck the succulents instead. Tough aloes and aeoniums are shredded instead.

I have also learned a few interesting facts about the Western gull – they mate for life and that they come back to the same spot to nest year after year (up to 20 years is typical for a gull). Waging a 20 year battle against a bird seems a bit ridiculous so it is far easier to accept the gulls. When I started as the gardener in 2006, I took a strong dislike to the gulls, but now, they have really grown on me and I’ve actually gotten to know some of the gulls. There is a one-legged male in Officers’ Row that I try not to disturb so he doesn’t have to stand up. There’s also a whole gauntlet of gulls nesting along the road that leads to the rose terrace. A few years ago, anyone walking down this road was taking a great chance at being marked, but now the gulls barely glance at me when I walk by. However, anyone they don’t recognize gets the full squawking treatment. There’s also a pair that nests in a huge clump of ivy in the Inmate Gardens on the west side. Their young usually wander around the gardens and drink from our hose during the summer.

Come out and see the gardens and gulls this spring! Nowhere else will you be able to experience a major seabird nesting colony, historic gardens, and a former prison on an island so close to a major city. I’ll bet you will admire the gulls in a way you never did before – what took me 6 years to realize, will only take you an afternoon.

This entry was posted in Plants, Wildlife. Bookmark the permalink.