Even though the plants on Alcatraz are separated from the mainland, they can still be afflicted with disease. One of the plant diseases that affect our plants is rust mostly at the end of spring and the beginning of summer. The most noticeable plants are the heirloom Pelargoniums, commonly called geraniums. These plants are growing in masses along the main roadway, the rose terrace and in the inmate gardens on the west side of the island. There are many types of rust – the rust that affects pelargoniums is caused by the fungus Puccinia pelargonii-zonalis. This rust shows on the upper side of the leaf as dark ringed circles with a whitish center. 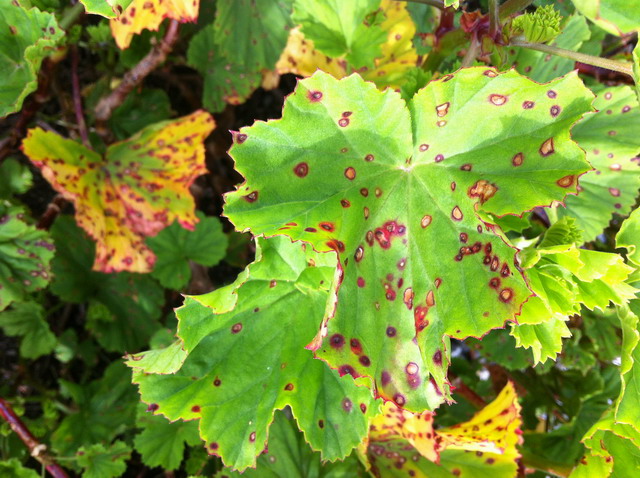 According to the Royal Horticultural Society, “Puccinia pelargonii-zonalis produces only two types of spore and only one of these, the rusty brown urediniospores, appear to be involved in the disease cycle. The other spore type is rare and has not been observed to germinate. The urediniospores are capable of surviving for several weeks in leaf debris.” Furthermore, some types of rust require two different plant hosts to complete its life cycle, but pelargonium rust can complete its cycle on one plant, making it easier for it to develop spores for the next generation. In just two weeks, the next generation can begin infecting nearby plants.

On the island, we do not use any chemicals in the gardens. We rely on cultural control, a fancy way to say volunteers and staff pick off the infected leaves and rake out any plant material from underneath the plants. We are also careful when watering not to splash the leaves, as water helps to spread the spores. Temperature and humidity dictate when the rust is active; temperatures below freezing and above 85 degrees Fahrenheit along with low humidity will prevent rust from developing. As lucky as we are to garden in coastal California, we never receive a frost and very rarely do temperatures ever go above 75. So we will continue to hand pick our leaves!

Hollyhocks are another plant that 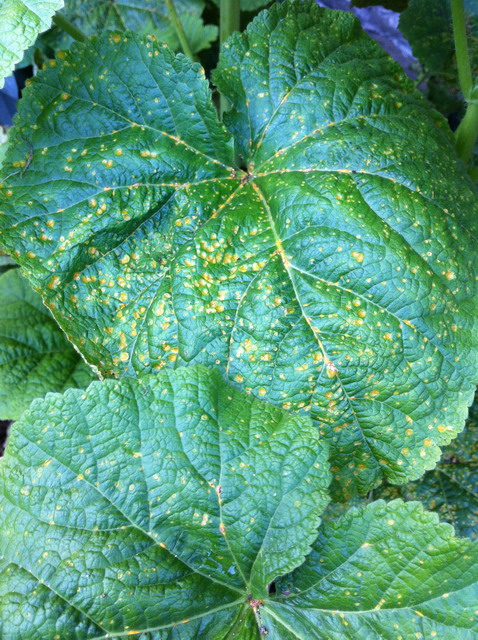 does get infected with rust Puccinia malvacearum. This fungus has similar characteristics of the geranium rust with needing only one host and is prevented by careful watering and removing wild mallows that are a source for inoculation. On Alcatraz, we do have the weedy cheese weed mallow, Malva parviflora that is growing in non-restored areas and is a source for this fungus to thrive.

Heirloom gladiolus also suffers from rust, believed to be caused by the fungus Uromyces transversalis.Two different spore stages are found on the leaves. Urediniospores are produced all summer and are responsible for the 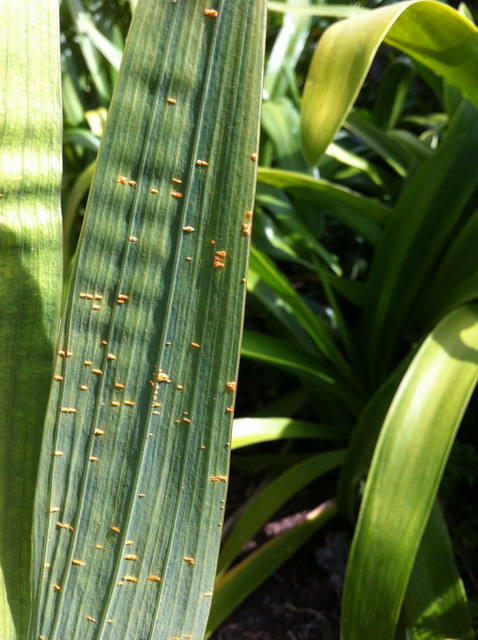 orange lesions known as sori that erupt on both sides of the leaves. Gladiolus rust is relatively new to the United States, first being detected in Florida in 2006. The rust, as well as gladiolus, are from South Africa, and were likely brought to America through bulbs that were being introduced. Once in America, the rust can easily be spread through the cut flower industry. The rust on gladiolus leaves spreads across the veins, unlike other rusts that form along veins or forms circles (University of Illinois). In our gardens, we are quick to spot the gladiolus rust and remove dispose of the infected foliage.

Through dedicated and consistent maintenance, we are able to control many of the outbreaks from rust; again demonstrating that it is possible to garden without the use of chemicals.