Gardens are all about change – hopefully for the better, but they are never still. With any change, it can almost be expected to face challenges; and this is especially true when you are gardening on Alcatraz.

This week, the gardens saw the installation of a new pipe railing, albeit a pipe rail that was historically there, but had long ago disappeared. The Officers’ Row gardens, opened to the visitors on mid-day Wednesdays suddenly had the new addition seemingly overnight. The approval and installation of the pipe rail was the easy part; getting the pipe rail to the island proved to be the real challenge. 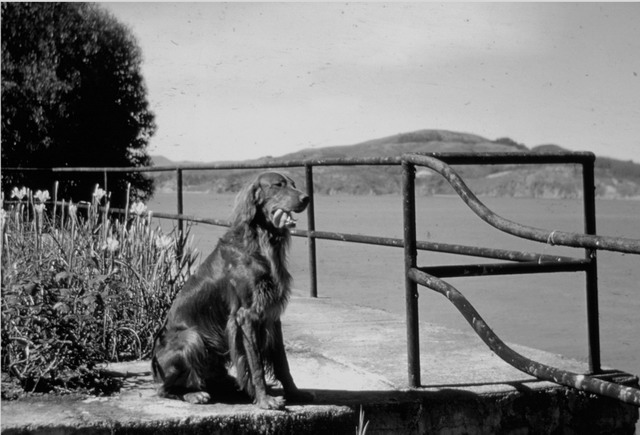 The pipe rail is evident in several photos from the Federal Penitentiary days, and with the obvious hazard, it was approved by the National Park Service review board fairly quickly.

The metal pipe rail was assembled off-site by Heavy Metal Iron and was planned to be brought to the island on an early morning boat. However, at the last moment, the 14’section was denied passage and another plan had to be drawn up. A second attempt was made. This time, the railing was scheduled to be on the early morning barge; but was hampered by the landing at Pier 33 being repaved. The third attempt took advantage of the monthly barge that sails out of Pier 50 and the railing was delivered safe and sound. Success!

Once the railing was on the island, it still had to be hauled up the switchbacks to the gardens. The guys had planned ahead and had brought a dolly to support the railing as they walked up the hill, and the exercise proved to be a good workout. 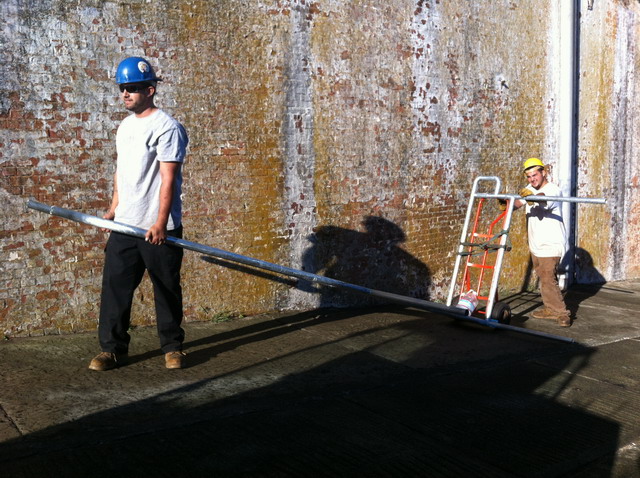 Hauling the metal pipe rail up the switchbacks. Photo by Shelagh Fritz

Installing the railing was pretty simple – coring the concrete to sink the posts, double checking that the railing was sitting level, filing the metal to have a snug fit and then a quick set mortar was used to hold the railing posts in place. 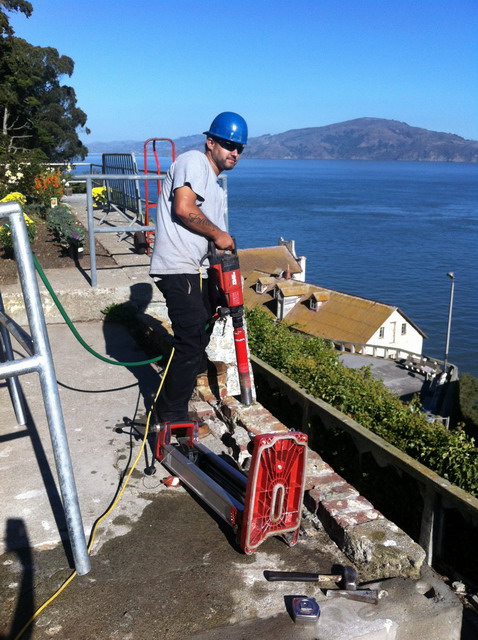 The crew had to bring all their own tools to place the railing, and be sure not to forget anything! Photo by Shelagh Fritz

The railing looks like it has always been there and I’m sure the seagulls will be happy to christen it when they return in February.

Instead of being asked gardening 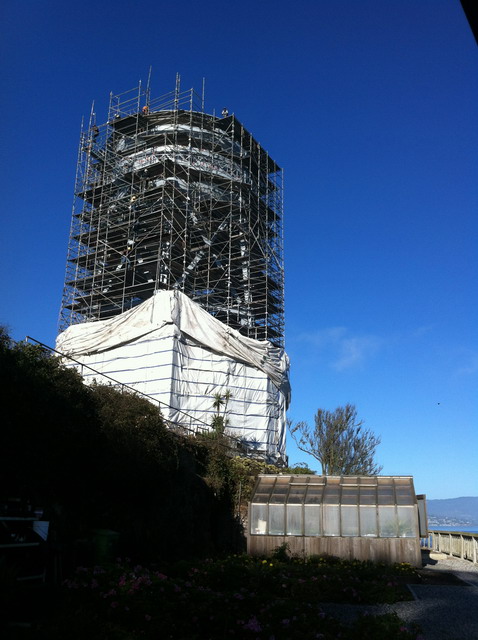 Water Tower being uncovered after a year of construction. Photo by Shelagh Fritz

questions, a common question visitors and locals alike have been asking is ‘What is that white covered tower on the island?’ The tower in question is the water tower that has been wrapped in protective plastic while repair work has been done.

The water tower was first built in 1940–41 primarily to hold fresh water that would be used for laundry services. The Federal penitentiary provided laundry service for the Army and inmates were put to work doing laundry. The sea air and wind have been punishing the tower ever since.

For the past year, workers have been busy removing rust, safely removing lead paint, repairing the iron work, and painting the structure with a coat of primer (Macropoxy 646) and two coats of finish paint (Sher-Cryl), the same paint that is used for painting the Golden Gate Bridge, except the water tower is not done in ‘International Orange’.

The work began with the construction of the scaffolding last October 24, 2011 and it was amazing to just watch the ant-like workers build up the scaffolding. The scaffolding was then wrapped in a heavy duty white plastic tarp for a few reasons – reduce disturbance of nearby nesting seabirds, safety of the workers and lead abatement. In a funny way, locals that have gazed at the outline of the island for years suddenly forgot what was there before it was wrapped. 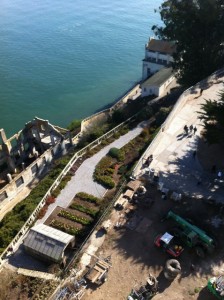 View of the rose terrace far below. Photo by Shelagh Fritz

This past week, I was invited for a trip up to the top of the water tower, somewhere I had never been before on the island! Walking into the tent at the bottom, I had to smile seeing a clump of Chasmanthe emerging; ever resilient, this island survivor never gives up.

On a windless day, walking up the levels of scaffolding was easy and the plastic wrapping hid just how far off the ground I was.  Apparently, on a windy day, the whole structure hums. 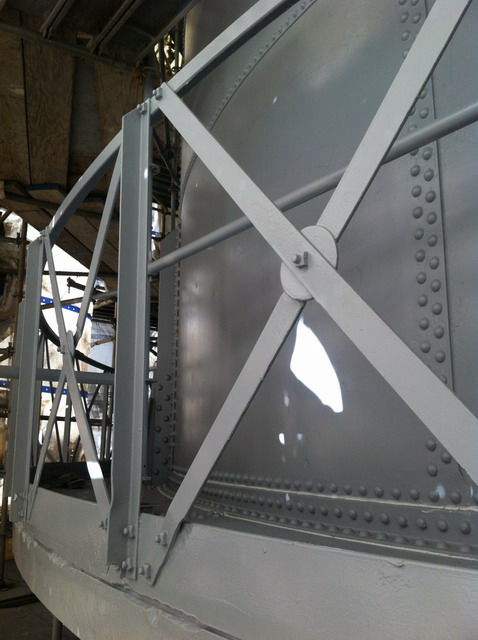 The repainted catwalk around the water bowl. Photo by Shelagh Fritz

The catwalk around the top of the tower is still original and Kyle was impressed with the quality of steel used when the tower was first constructed. The walking platform is about ½ inch in thickness and solid, not showing any signs of rust. Kyle pointed out the name of the company where the original steel was made – Tennessee. New construction consisted of a new roof along with the supporting top one foot of the water tank itself. 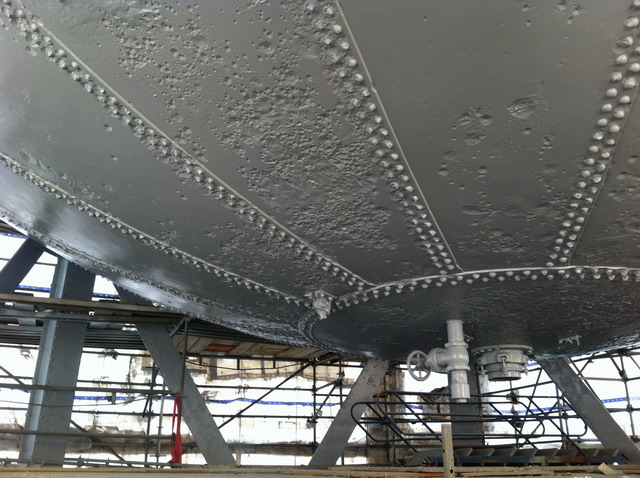 The repaired tower will not hold any water, 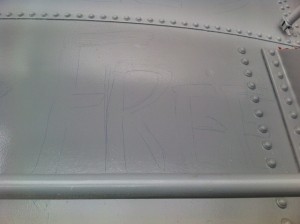 Native American graffiti sketched out and waiting to be painted. Photo by Shelagh Fritz

but its reconstruction was important as the water tower contributes to the National Historic Landmark that Alcatraz is. The Native American graffiti is also an important part of the island’s history and has been repainted.

The scaffolding is already coming down and the new water tower will be unveiled!

Posted in History, Rehabilitation | Comments Off on Unveiling the Water Tower

Calling in the Marines

Once again, San Francisco amazed visitors from around the country and the world this past weekend with a plethora of activities going on throughout the city. Fleet Week, America’s Cup races and Hardly Strictly Bluegrass Festival were just a few of the events that were on offer.

With so many activities for visitors 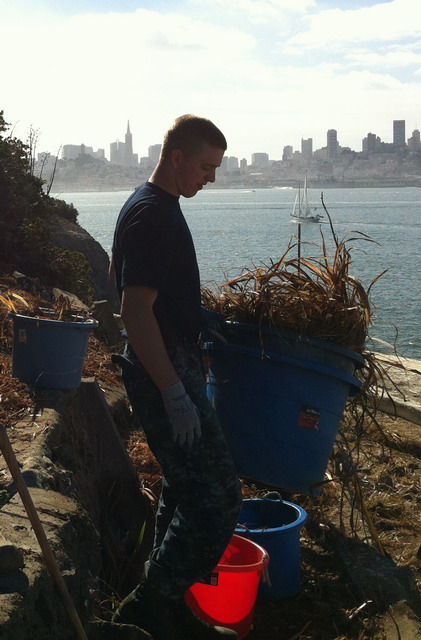 With the city for a backdrop, it was a beautiful day to work in the gardens. Photo by Shelagh Fritz

to choose from, it was a special opportunity to have the United States Marine Corps and Navy personnel volunteer throughout the Golden Gate National Recreation Area.  Many of the personnel were on ships coming from Los Angeles, and for many, this was a first time visit to San Francisco.

A group of Marines joined the garden volunteers to clear overgrowth from a series of terraces. We had been saving this ‘once a year’ project for a tough volunteer group and who could work harder than the Marines? After a quick lesson on how to work safely on the historic terraces built by inmates in the 1940s, and shown the difference in the types of plants that we were cutting back, the Marines set to work. 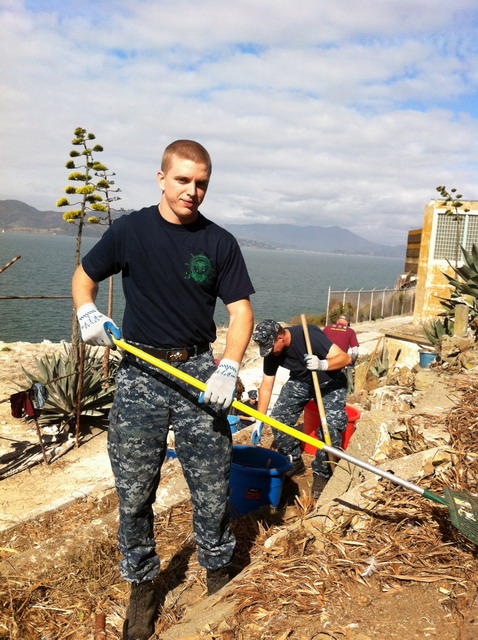 Clearing out the vegetation on the historic terraces. Photo by Shelagh Fritz

In no time at all, the terraces were cleared and we made several trips to our compost pile, which is now a compost mountain.

The volunteer coordinators from the Golden Gate National Parks Conservancy were instrumental in organizing the activities. For the second year in a row, Marines and Navy have volunteered throughout the park. This year, there were 154 personnel volunteering at 5 park sites. Together, they contributed 462 hours, or the equivalent of 3 months of work for one full time staff! 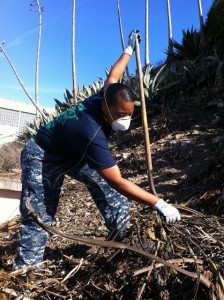 Everyone pitched right in to help. Photo by Shelagh Fritz

Thank you to all of the volunteers who helped in the gardens, we hope to see you back next year! 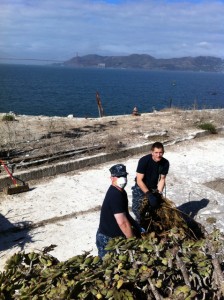 Fast progress was made in clearing the terraces. Photo by Shelagh Fritz 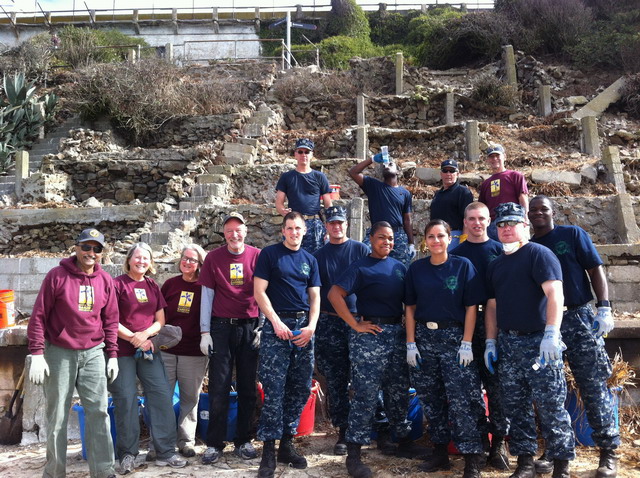 It’s not every day you get to work alongside the Marines! Photo by Shelagh Fritz

Posted in Volunteers | Comments Off on Calling in the Marines