Rejuvenation of the Eucalyptus Slope

Alcatraz these days is a bustling place of projects. The big project of repairing the west side wall of the cellblock is very apparent but visitors can’t see the work being done as the scaffolding is wrapped in white plastic.

The other significant project that was just completed at the end of December was in full sight of visitors and left a dramatic difference to the island. The Eucalyptus grove at the south end of the island (just off the dock), was removed. The project had been two years in the planning and finally had enough urgency and funding to make it possible. The trees, originally planted by the military in the early 1920s, had reached maturity and were a safety risk of falling.

Marin County Arborists were trusted with the tree removal. The company had previously worked on tree removals on the island and was familiar with barging equipment over and working around visitors. 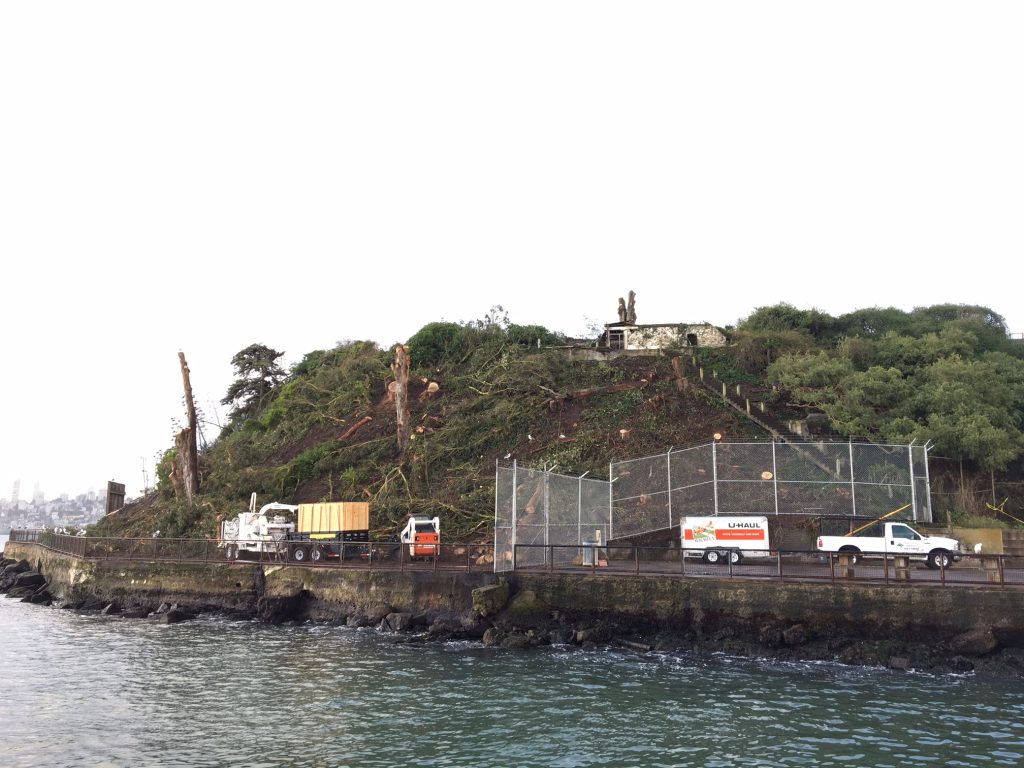 The chips were hauled to the Parade Ground to be stored until the National Park Service’s archeologist had a chance to examine the bare slope for evidence of military construction. We received the ‘all clear’ within a day of the trees being removed and we set to work! 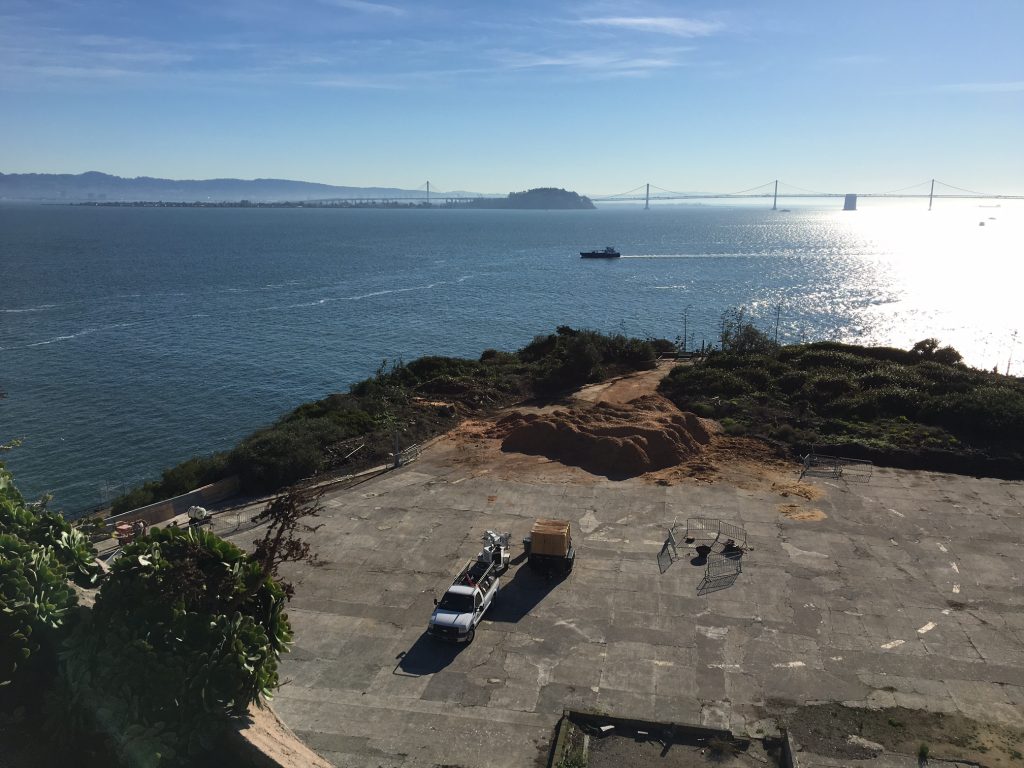 The chip pile growing to the size of a house on the Parade Ground. Photo by Shelagh Fritz

First, chips from 18 trees is a heck of a lot more than I could envision!  The recommendation from consulting arborist was to put the chips back on the slope to a depth of 4”, place jute netting over top and anchor wattles horizontally across the slope to stabilize the slope. The slope had been eroding badly for years, so this would be the perfect opportunity to stop the erosion.

Volunteer groups were enlisted to manually place the chips on the slope. With bucket brigades and teamwork, the slope was covered over a month. The Golden Gate National Parks Conservancy’s Stewardship Team (of which the Alcatraz Gardens is a division within the company’s organization) were set to take a day off from their normal sites and lend a hand. To sweeten the deal, an overnight was planned (and what better way to say thank you than a night in solitary?). 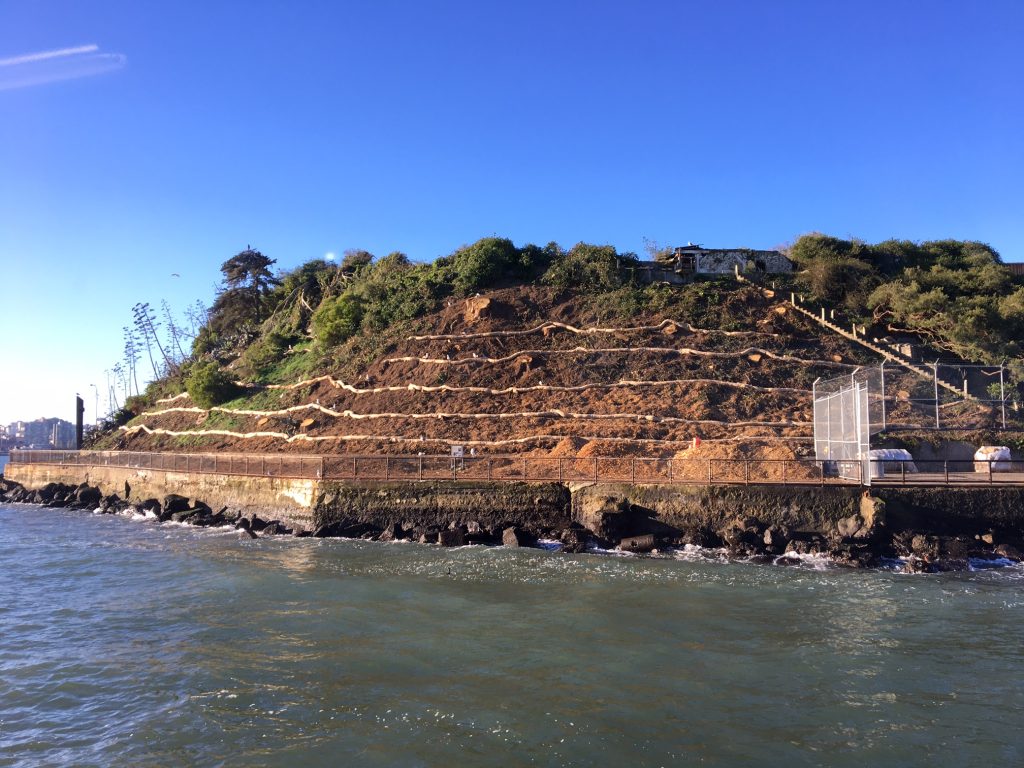 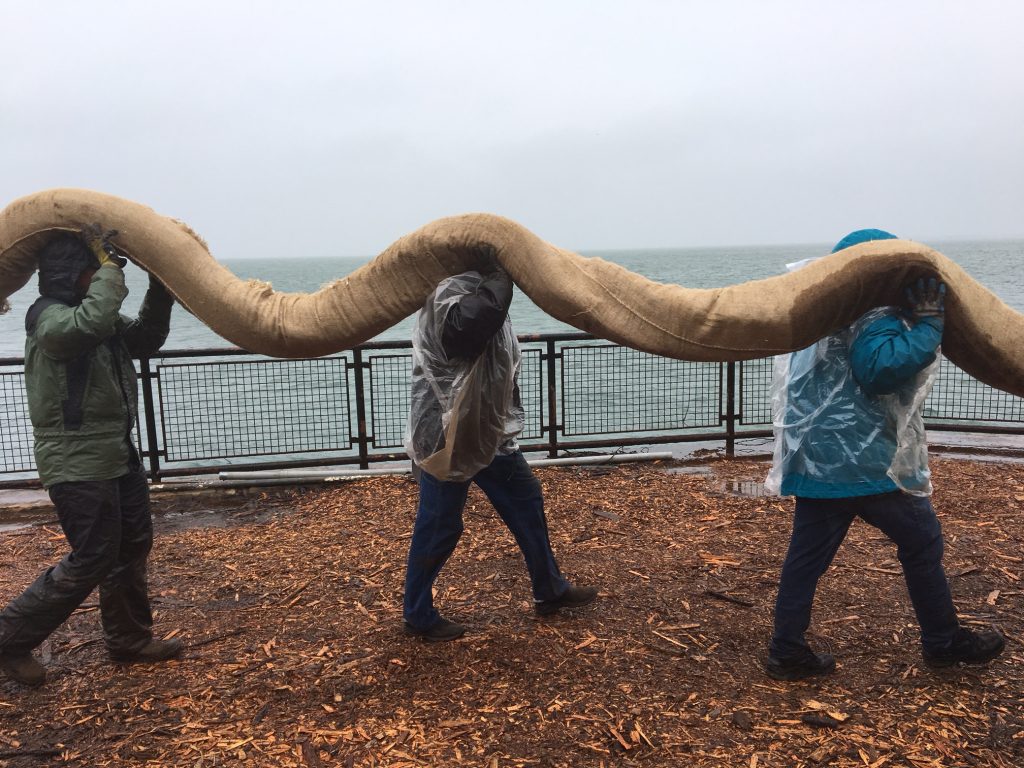 Biodegradable wattles were placed across the slope to control erosion. Photo by Shelagh Fritz

The effort was a huge success with people filling 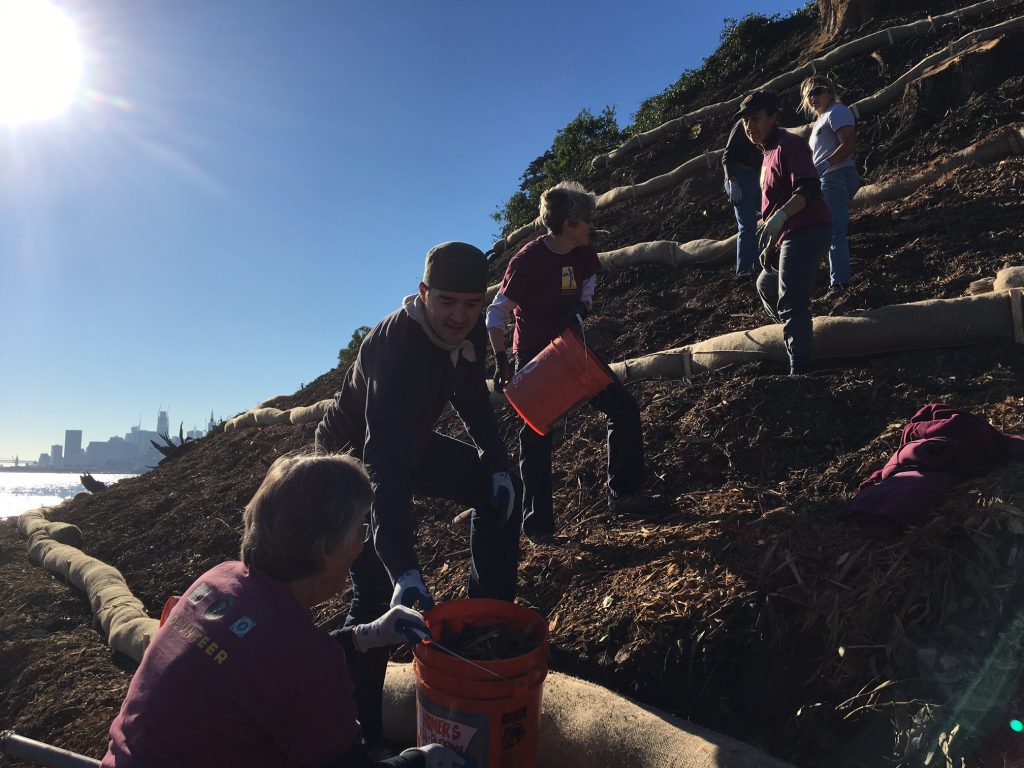 Once the chips were in place, the jute netting could be placed on top. The rolls were heavy and we soon figured that cutting them first was best. 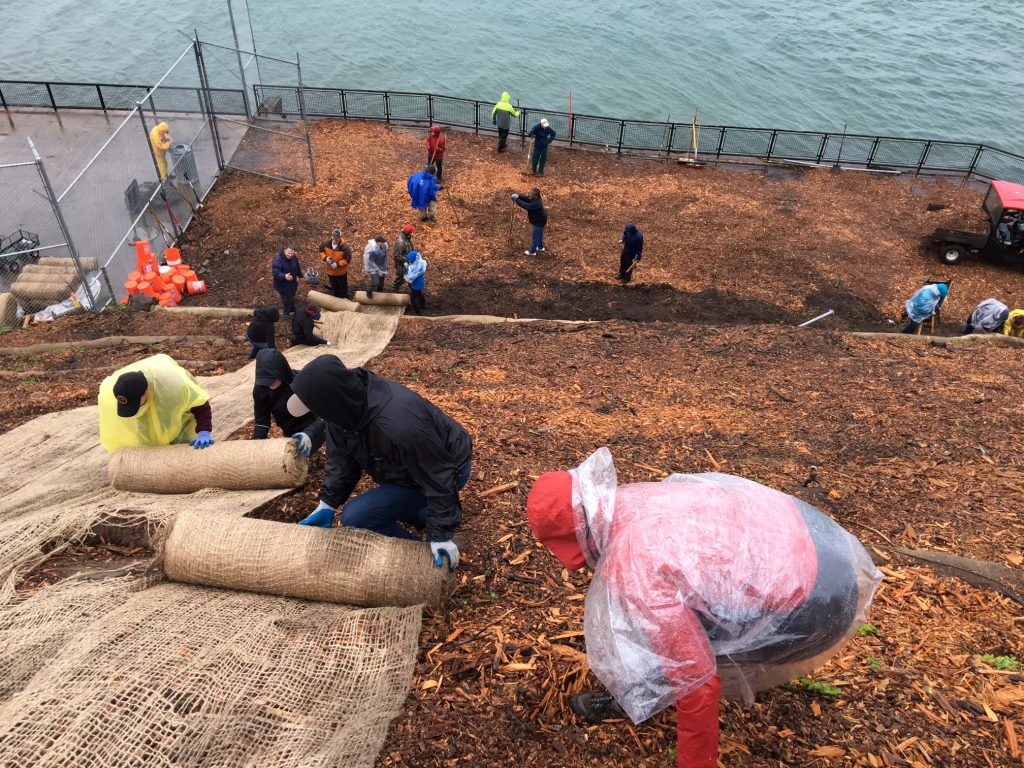 Rolling the jute rolls from the top. We soon realized, cutting the netting was much better. Photo by Shelagh Fritz 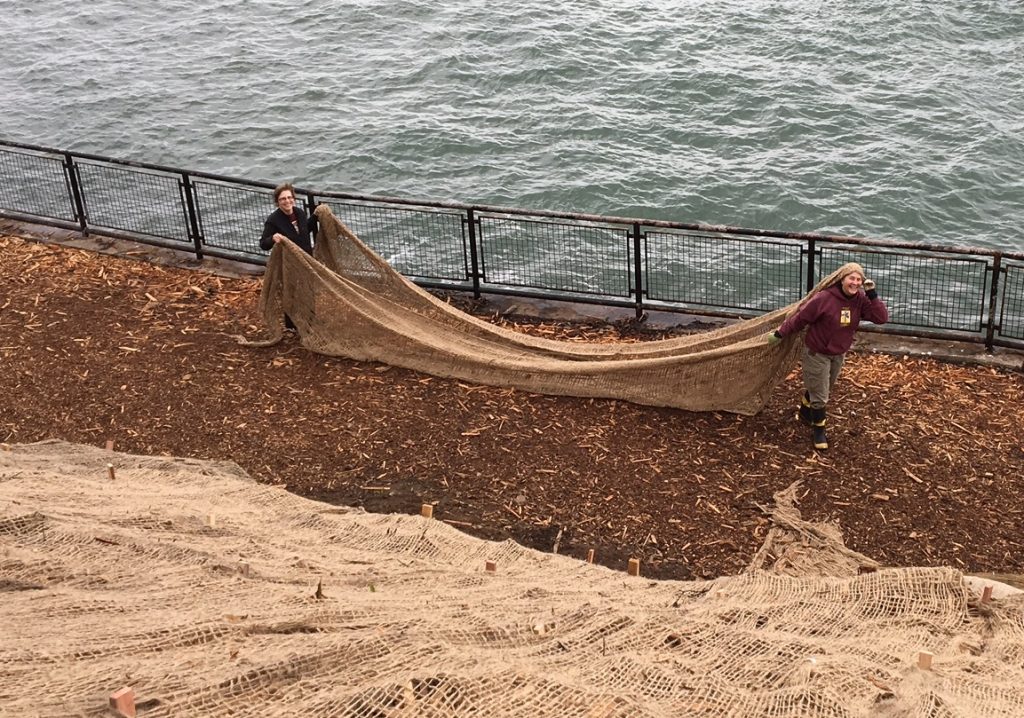 Two volunteers pretending to be Kate Middleton and Pippa carrying her train. Photo by Shelagh Fritz

Aside from the Stewardship Team, four corporate groups and the regular drop-in garden volunteers pitched in to help spread the mulch. In total 900 yards of jute netting was placed and 750′ of wattles were installed. 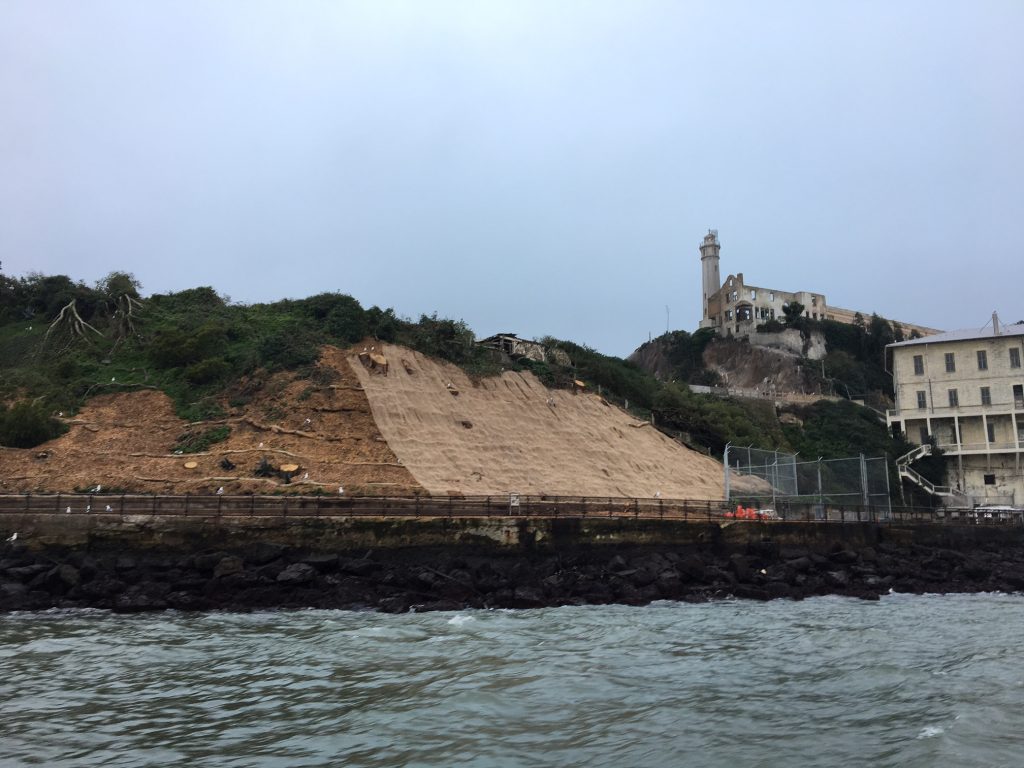 The slope will be replanted with Eucalyptus cinerea ‘Pendula’ in September 2017 in keeping with the historic look of the island.

On another note of discovery, the perimeter wall of the Parade ground was further revealed along with the basement of one of the former cottages. And a new fern was found growing! With more years of planning to come, hopefully this neglected garden are will be the next focus of garden preservation.

Posted in Artifact, Gardens of Alcatraz, Plants, Preservation, Rehabilitation, Volunteers | Comments Off on Rejuvenation of the Eucalyptus Slope