The term ‘invasive’ is often misused to label plants or anything that is intrusive in the natural environment. It is something I have only recently began to question. What actually validates a plant being invasive? (I’m going to stick to just talking about plants… I am a gardener after all!) My experience with talking to the public when removing invasive or unwanted plants has been pretty limited, but this past week as I was weeding the lawn, a guest on the island asked me, “Are you weeding invasive grasses?” Without really thinking about the question, I said, “Yeah.” The grasses we were removing from the lawn were crabgrass, annual bluegrass, and rattail six weeks grass.  After he walked away I was left thinking, “Are those really considered ‘invasive’?” This led me to a bit of research in pursuit of an answer…

Plants that are invasive are actually scientifically categorized as so. It seems like scientists also have trouble labeling whether or not a plant is invasive or how plants can eventually become invasive over a long period of time. Plants that aren’t native to an area aren’t considered to be an invasive species until they have a negative impact in disrupting a native area. The displacement of native species and the ability for a non-native to cause economic and human harm are the two attributes for a plant becoming an invasive species. The Environmental Detection Distribution and Mapping System (EDDMS) have a simple list of characteristics showing the differences between an invasive and an ornamental plant:

The three grasses we were removing from the lawn are actually not on the invasive list for California. They are weeds, unwanted in our native sedge lawn, but aren’t labeled as invasive. Plants can however become invasive over a period of time. Because of this, it’s important to monitor non-natives and their growth in native areas. 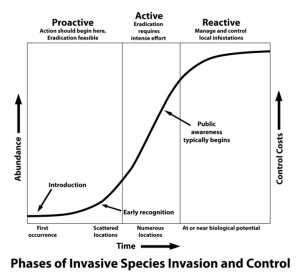 This graph is a good representation of how plants begin to become a threat to natives and the actions that should take place to keep it under control.

During the lag phase and early recognition is when it is less costly and easier to eradicate. To prevent plants from reaching levels of higher efforts to control, it is crucial to catch them and be aware of the plant’s potential threat to a native area.

So, with all that being said, let’s see if we can clear up some misunderstanding on a few plants that call Alcatraz home. I think my favorite example, is the Echium candicans or commonly known as Pride of Madeira.  It is a plant native to the island of Madeira, but has been introduced to the coast of California and thrives very well here. Many think that this plant is invasive because it is found among the hillsides and coastal bluffs mixed with native plants. Although it does spread fairly easily, it has shown no threat to native plants and is listed on the California Invasive Plant Council, (Cal-IPC), as a limited threat. It is a well admired plant on the island and copes well with the high winds and little rainfall. It is an island survivor plant that has naturalized itself and is a great pollinator for bees. 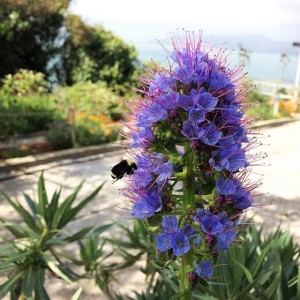 Echium getting some bee lovin’. Photo by: Caity Chandler

On the other hand, English ivy, (Hedera canariensis), is a plant that is considered to be a high threat on the Cal- IPC list. It is found all over the island and was one of the more prevalent plants contributing to the overgrowth in the gardens and is still a plant that we are consistently working on cutting back to keep it at bay from the garden beds. In other overgrown areas though, the ivy plays a vital role during water bird nesting season. They use the ivy overgrowth as a nesting site to lay their eggs and raise their young. Himalayan blackberry (Rubus armeniacus), is another plant found on the island that is listed as a high threat and we eradicate it from the garden beds, but leave it be in overgrowth areas because the birds also use it for nesting. 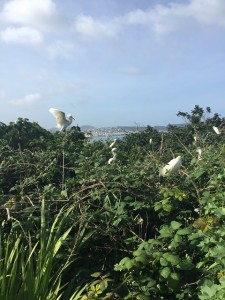 Jupiter’s beard (Centranthus ruber), and Mimosa tree (Albizia distachya), are examples of plants on the island that are commonly mistaken as invasive. They both are island survivors and spread fairly easily, but neither is listed on Cal-IPC as invasive. We like to use the term ‘aggressive’ and we monitor them and remove any unwanted seedlings. The mimosa tree is a nesting site for Anna’s hummingbirds and Jupiter’s beard adds a seasonal burst of color throughout the gardens. 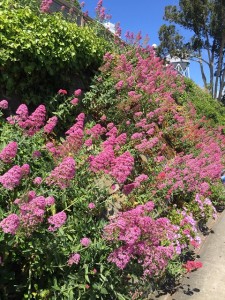 Jupiter’s beard thriving in one of the maintained garden areas. Photo by: Caity Chandler

I hope this clears up some confusion about what invasive actually signifies. Just because a plant isn’t native doesn’t make it invasive. The invasive plants on the island are kept in check and tell the story of the islands past gardeners. For today’s gardeners, you should check local plant lists for invasive species before purchasing.