After being sentenced for counterfeiting in 1941, Elliot Michener was involved in an escape plot from Leavenworth Prison and then sent to Alcatraz. On the island, he was assigned the task of retrieving handballs that had landed outside the recreation yard walls. He demonstrated his trustworthiness by returning a dropped key to the prison guard, and was then enlisted as a gardener. He spent years on the island's west side creating cottage-style gardens.

For Michener, gardening became an escape and the beginning of a lifelong passion:

The hillside provided a refuge from disturbances of the prison, the work a release, and it became an obsession. This one thing I would do well…If we are all our own jailers, and prisoners of our traits, then I am grateful for my introduction to the spade and trowel, the seed and the spray can. They have given me a lasting interest in creativity. 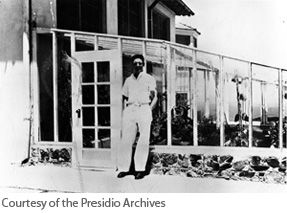 Michener continued to work in the gardens until 1948, when he became the houseboy for Warden Swope and his wife. He constructed a greenhouse abutting the warden's house, in which he grew tuberous begonias and tended the greenhouse plants. In his new position, he developed a lasting friendship with the warden and his wife.

On November 16, 1950, Michener was transferred to Leavenworth Prison. He wrote to Warden Swope in February 1951 about how unhappy he was at Leavenworth and how he longed to return to gardening on Alcatraz:

I believe that my best and only practical course is to get back to Alcatraz. You will understand, I think, that after sixteen years in prison I just haven't the stomach for eight more years of the discipline and close confinement that are standard here. At Alcatraz, I could at least grow Bell roses and delphiniums seven days a week and enjoy considerable freedom and trust, and in general make the best of things.

In 1952, after Michener had been released from prison, he wrote to Swope, asking him for a rose from the Alcatraz gardens. At the time, Michener was working at Quality Park Farms in Hudson, Wisconsin with his friend and former Alcatraz prisoner Dick Franseen.

Dick and I are getting along well and for the first time I'm learning how much better one can do living honestly than by, say, counterfeiting! We have cars & fat bank accounts…And we have a favor to ask: will you send us a bush of our old 'Gardener' rose?

Decades later, Michener returned to Alcatraz for a visit, and while touring the island, was interviewed and taped. Click here to listen to him talk about working for the warden and his wife, and about gardening on the island. Watch Garden Conservancy Project Manager Shelagh Fritz talk about inmate gardener Elliot Michener.


Click on the inmates’ names below to learn about their stories as Alcatraz gardeners.